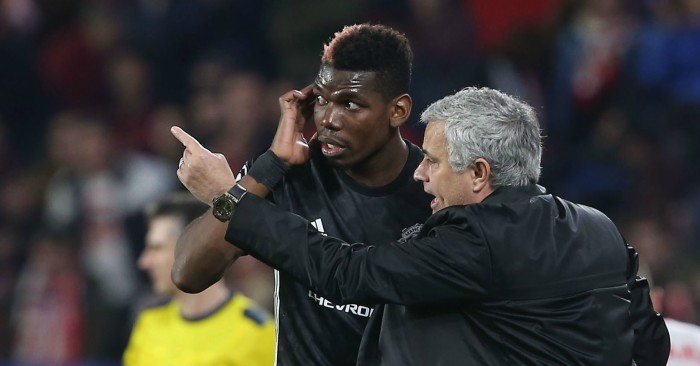 Petit, 47, who was capped 63 times by France believes his fellow compatriot is “sulking” at Old Trafford and says the conflict between the player and boss Jose Mourinho is evident.

Last month The Sun, claimed Mourinho and Pogba had a “furious training-ground showdown” after the player was axed in the games against Huddersfield and Sevilla.

The tabloid reported in an exclusive that Mourinho ended the heated meeting in his office between the pair by telling the 24-year-old “I’m the boss” and asked Pogba to “have a look at the sign on the door on the way out”.

It’s understood Pogba had arranged to speak to the Manchester United boss over his unhappiness with his tactics and the position was being played in.

Mourinho has previously labelled reports that the pair had fallen out “lies”, but the Daily Star claimed on Thursday that Mourinho was again furious with the player after his inept showing against Sevilla this week.

And Petit, who won the Double with the Gunners in 1997/98, says Pogba needs to step away from the “duel” with Mourinho.

“Paul, I’ll give him a little bit of advice – change attitude a bit,” he told RMC.

“He should stop making it a Mourinho-Pogba duel, because the club of Manchester United is much more important than those two guys.

“Right now, he’s making it personal and you can clearly see that on the pitch as he is sending out a lot of negative signals.

“It gets tiresome when you’re sulking permanently.”