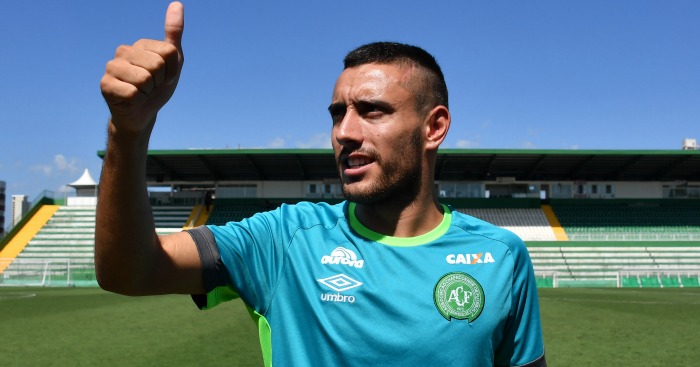 Plane crash survivor Alan Ruschel will play for Chapecoense in a pre-season friendly against Barcelona.

The Brazilian club were travelling to play in the first leg of the Copa Sudamericana final against Atletico Nacional last November when their jet carrying players, club officials and journalists came down near the Colombian city of Medellin.

Defender Ruschel, 27, was among the six survivors of the crash, in which 71 people died. The Nova Hartz-born left-back required surgery on a serious back injury but has now resumed training.

Chapecoense have rebuilt their squad and have since returned to competitive action in South America but Ruschel’s recovery and availability represent an “important step” for both parties.

A statement published on chapecoense.com read: “Chapecoense can confirm that after a joint decision by the board, the department of football and the player himself, who is fit to play, the official return of Alan Ruschel to the side will take place on August 7 against Barcelona at the Nou Camp.

“Alan’s return represents an important step in his recovery and in the process of rebuilding the squad.

“Considering the magnitude of this match against a great Spanish team, in one of the temples of world football, we recognise that the game represents the ideal occasion for his return.”

Barca, who announced plans for this friendly meeting last month, will contest the Joan Gamper Trophy with Chapecoense. The fixture traditionally serves as the official unveiling of the Barca team each season in front of their own fans.