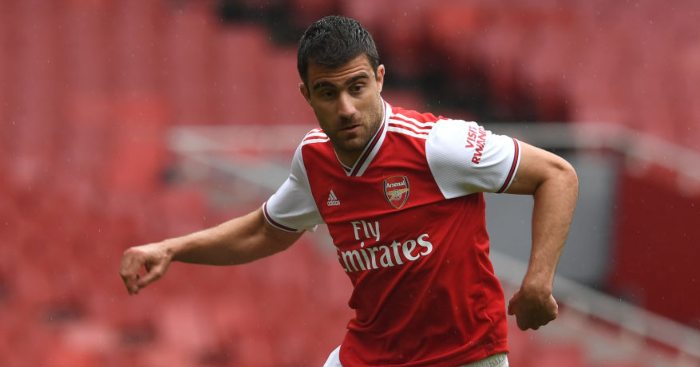 Sokratis Papastathopoulos, David Luiz and Shkodran Mustafi are all likely to leave Arsenal this summer, according to Charlie Nicholas.

There have been rumours in the last couple of weeks that Luiz could be on his way out of the Gunners this summer, while Sokratis and Mustafi have hinted at moves away from the club.

“The break probably came at a decent time for Arsenal. They were improving under Mikel Arteta,” Nicholas told Sky Sports.

“Has he brought himself time like people have been saying? I don’t think so. All he has done has worked on a strategy a bit more. The reality stares you straight in the face – Arsenal are ninth with 40 points. I look at the table and Arsenal have 13 draws in 28 games, yet they have only lost six all season.

“I would like to be more enthusiastic, but I can’t. You can work with Sokratis Papastathopoulos, David Luiz, and Shkodran Mustafi and get them to improve, but they will not improve by much. Luiz will move on next season and Arteta will know that Sokratis and Mustafi are all seemingly pitching to be sold.”

Arsenal face Manchester City on Wednesday night as the Premier League restarts after being halted because of the coronavirus pandemic.

And Nicholas predicts that the Gunners will find it hard to match City despite their improved performances under Arteta.

“City will have a lot of the ball – I think Arsenal will sit and play one up front,” Nicholas added. “As much as Arteta loves playing a 4-3-3, he will have to protect the weakness at the back.

“The areas where Pep’s side will be overpowering will be in midfield and the wide areas. Whether Leroy Sane stays next year or not we do not know, but he will busting to get a start and get back playing.

“You then have the likes of Bernardo Silva, Riyad Mahrez, Raheem Sterling, Sergio Aguero and Gabriel Jesus – the choices are remarkable.

“If Arsenal were to go with an attacking line-up, if it was a front three, it would become an isolated Pierre-Emerick Aubameyang or Eddie Nketiah. They will not get the service or chances.

“Sterling went through a poor spell before the break and drifted off, so he will be keen to get back into it. The standards he set meant he was not as good as what he has been.

“There is too much pace, movement, control in City’s play, and in reality, Pep will have them fresh again. One thing we can expect is Kevin De Bruyne to be his same old brilliant self.

“Man City have won one trophy, they have FA Cup to go for and the potential of the Champions League, so they have to be ready for that. City will get back in the groove, keep the ball and carve teams open.

“I think Arsenal will have a half-decent run-in but this will be too much for them. City will take care of business. Man City 3-1 Arsenal.”