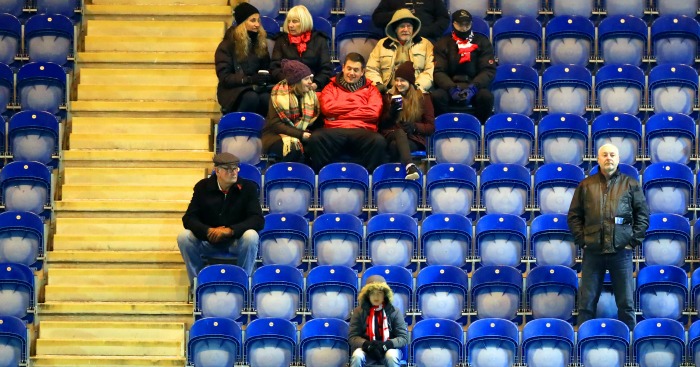 “The next stage is getting the group stage under way and the draw has thrown up some exciting prospects. I’m looking forward to seeing how the competition develops on the pitch and also the reaction it gets from the crowd.”

If the key to great comedy is timing, the Football League’s CEO can look forward to a sell-out stadium tour.  Speaking in late-July, Shaun Harvey was proclaiming exactly the sort of ‘no no, nothing bad to see here’ assessment that has proved so successful in modern politics; perhaps he should be an MP instead?

By every reasonable assessment, the EFL Trophy – let’s go with Checkatrade Trophy from now on – has been an abject failure. Having started as the Associate Members’ Cup in 1983, becoming the Football League Trophy in 1992, we have now seen the full bastardisation of a competition that once had fine intentions and drew interest from supporters. Never go full bastardisation.

There’s a danger of overestimating the importance of the minutiae, but the Twitter handle for the Checkatrade trophy is @Checkatradetrpy, something that becomes even more amusing when you consider that they can’t use @Checkatradetrophy because it’s too long. The trophy that doesn’t even get to spell its own name right on social media; that’s quite the PR kick in the balls.

Let’s by hyper-generous for a moment. Let’s say that Harvey’s grand vision, to include Premier League academy teams in the competition, was a well-meaning attempt to give young players more competitive football, and founded on a belief that lower-league fans would be excited by their presence. Let’s now be realistic: Everything about that vision was short-sighted.

It started with the immediate rejection of the competition by the teams that mattered most to its success, at least in Harvey’s eyes. Arsenal, Liverpool, Manchester United, Manchester City and Tottenham Hotspur all declined to participate, while Newcastle United refused the offer as a Championship club.

The Football League clubs, who had agreed to the proposals partly because they thought it might stem the tide of the ‘B teams/League 3’ idea but also because the presence of elite clubs did turn the heads of many chairpeople, were left put out. “If I’d have known such a large amount of Premier League sides would not take part then no chance,” Peterborough chairman Darragh MacAnthony said.

Others were unconvinced from the start. “We don’t feel there would be a benefit even to getting one of the bigger clubs like Manchester United, Manchester City, Liverpool or whoever,” said Accrington managing director David Burgess. “Accrington played Manchester United here in the Lancashire Senior Cup here a couple of years ago and there were a few hundred people here. There’s no real enthusiasm for under-21s football or reserve-team football or whatever you want to call it.”

Even those Premier League clubs who did take part have hardly embraced the competition. Chelsea, Everton, Stoke, West Ham and West Brom were all eliminated with one win between them, leaving Leicester (four points behind Walsall), Swansea (behind AFC Wimbledon), Sunderland (behind Rochdale) and Southampton the only Premier League clubs to qualify.

Of the four FA Youth Cup semi-finalists from last year, Arsenal and Manchester City did not take part while Chelsea and Blackburn might well not have bothered; neither won a game. Even the team names were confused. Some sites list teams as ‘Under-21’, others as ‘Under-23’ and others ‘reserves and academy’ or ‘academy’.

Part of the reason for the tournament’s failure is a confusing set of rules that promote a message that this is nothing more than glorified reserve-team football. Premier League and Championship sides were forced to name six players in their starting XI who were under 21 at the end of June but senior players still played a prominent role, negating the supposed vision. Teams from Leagues One and Two had to name a minimum of five “first-team” players in the starting XI (with its own detailed definition). It led to ludicrous incidents such as Bradford City goalkeeper Colin Doyle being substituted after 45 seconds of one match.

Anyone surprised that lower-league clubs might react badly to having rules imposed upon them in their own competition might want to reconsider. This is the response to exploitation, by clubs who feel they have been at best ignored and at worst trampled all over.

The result of mistrust and misgivings is disinterest, and the Checkatrade Trophy is at least breaking records in one area. Middlesbrough’s home game against Shrewsbury Town was watched by 308 people and 392 watched Fleetwood Town host Blackburn Rovers. Home crowds are regularly measured in the hundreds and away fans in the tens, the reaction to a supposedly regional group draw that produced round trips of up to 340 miles.

‘Reports of an away following of 2 at Chesterfield last night are untrue,’ Accrington’s official Twitter account tweeted. ‘We counted at least 6….’ *Everyone stands to applause*

Most worrying of all for Harvey is the drop in attendances outside of the fixtures containing Premier League clubs. Cambridge United vs Scunthorpe United drew a crowd of 666, almost three times fewer attendees than Cambridge’s game against Dagenham in the first round last year. At Bradford’s Valley Parade, 1,865 watched Bury in 2016; 4,127 watched Barnsley last year. At Crewe, 929 attended Chesterfield 2016, while 2,168 watched Wigan in 2015. That suggests that the alterations have not just failed this season, but damaged the entire fabric of the competition moving forward.

Not that Harvey will be deterred from sticking his fingers in his ears and covering his eyes while delivering the party line. Here he is speaking last month: “We need to continue the competition, see what the benefits are and measure it at the end and not at this intervening time. Low crowds are a concern but this was an innovative approach to solve a big problem. We will be doing plenty of work to try and understand what the reticence is towards the competition.”

I can help you there, Shaun. Ticket prices for league football are already too high for fans. You then created a regional tournament that ended in ludicrous fixtures. You railroaded clubs into a vote that many presumed was their only way to relieve – or stave off – a more serious concern. You proclaimed the benefits for Premier League clubs who, it subsequently turned out, would rather manage their own academies through Professional Development Leagues. Is that enough to go at?

No? Okay. Supporters are sick of lower-league football being effectively bribed by their governing body. They’re sick of being made to feel that their clubs are puppets to assist a Premier League that already enjoys infinitely more benefits at their expense. They’re used to the gap, but sick of it being artificially widened.

For a lower-league fan, football has become a version of Heathcote Williams’ poem Autogeddon, in which aliens watch earth from above and assume that cars are the lifeform and people the fuel, being fed in and spat out at regular intervals. Fans are no longer the lifeform but the fuel for the Premier League.

The Checkatrade Trophy, with its embarrassing attendances and PR own goals, is not the cause of the problems, but the effect. We’ve at least found the line past which lower-league supporters are no longer prepared to swallow the bad news and then say thank you for the meal.

We’re delighted that Daniel has been nominated for the FSF Writer of the Year award. Please go here and vote for him