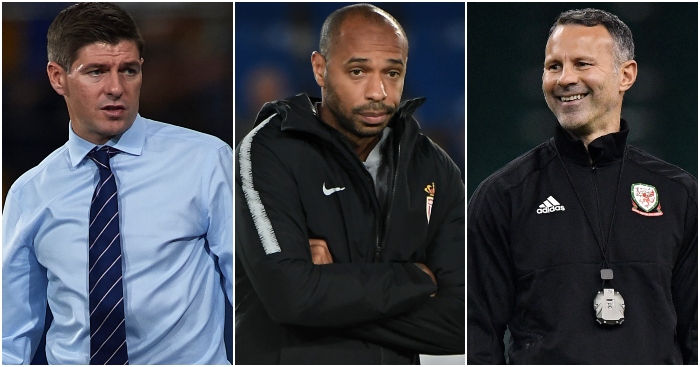 The former Manchester United assistant had plenty to prove upon being appointed as manager of his country. He has never hidden his ambition to boss at the highest level, but United refused to gamble on the managerial rookie and his interview for the Swansea job was said to be less than impressive. #anyonebutgiggs was doing the rounds on social media prior to his Wales appointment at the turn of the year but the 61-cap serial winner quickly began winning over the sceptics.

His reign began with a 6-0 win in China but the 4-1 thrashing of Republic of Ireland in his fourth game in charge at the start of this season really marked the watershed between Chris Coleman’s era and the new regime, when the likes of Connor Roberts, Chris Mepham, Ethan Ampadu and David Brooks replaced Wales stalwarts Chris Gunter, James Chester and Joe Ledley. Defeats to Denmark and Spain followed but another win over Republic of Ireland means Wales can win their Nations League group by beating Denmark at home. The results may have been mixed but Giggs has received plaudits for Wales’ style and his faith in youth. It is almost as if he is trying to make a point to a former club…

What he said: “I’d like to think I’ll be the same kind of manager as I was a player, with professionalism but also a little bit of fun along the way.”

What they said: “You can see the flair and spark they play with. It’s very similar to the DNA he inherited at Manchester United. It’s going to be very interesting to see what he can bring” – Kasper Schmeichel

Don't care. After 29 years of #walesaway I'm finished if Giggs gets the job. Not wasting my time, effort & limited money on someone who can't match 1/10th of my commitment #AnyoneButGiggs

The former Liverpool captain was appointed upon the conclusion of last season, giving him all summer to mould a squad capable of challenging ex-boss Brendan Rodgers’ Celtic. Gerrard made the most of the time and resources available, signing 15 new players, but the changes had an immediate impact. Rangers went 12 matches unbeaten at the start of Gerrard’s reign before his first Old Firm derby ended in his first defeat as boss. Subsequent single-goal defeats at Livingston and Aberdeen leave Rangers in third place, two points off Celtic, and though the Gers surrendered their record unbeaten run in Europe to Spartak Moscow, Gerrard got a reaction when his side put seven past Motherwell last week.

So far, so good. But some reckon he should quit while he’s ahead.

What he said: “I have to be aware I must control my emotions a lot more. It’s not about me now. It was about me when I played. Now the challenge is to get a group as right as I can, using my journey and experiences to help them.”

“I understand the modern player. I see the characters in my dressing room. The younger ones are social-media driven, they can’t wait for the next new coloured boots… football is evolving. If you want to stay involved, you have to get up to speed with it. I’m open to it, as long as people keep their standards and do what they have to do. I don’t mind a player wearing pink boots and having lines striped all over their hair. As long as they give me eight or nine out of 10 on a Saturday, that’s fine with me. No problem at all.”

What they said: The impact Steven Gerrard has made has been unthinkable really” – Chris Sutton

“Steven Gerrard has come in and given Rangers a new lease of life. If you compare it to last season then you have to say it’s immense strides Rangers have taken under Steven” – Alex McLeish

Lampard, like Gerrard, was able to reshape a Derby squad which reached the play-offs last season under Gary Rowett with nine new arrivals this summer, including Mason Mount and Harry Wilson, paving the way for 17 departures. The difference? None so far, at least in terms of league position. Lampard has the Rams in sixth place – where they finished last season – five points off leaders Norwich. The biggest headlines have been created in the Carabao Cup, with Lampard getting one over on his old boss by dumping Jose Mourinho’s Man Utd out on penalties, before a swift return to Stamford Bridge, where the Rams impressed despite going down 3-2. The Championship remains the Rams’ focus, though, and Lampard was nominated for the manager of the month award after going through October unbeaten.

What he said: “Hard-working, how I was as a player. My team, I want them to have that as a base. I want them to be aggressive, I want them to play good football, fast football, I don’t mean beautiful tiki-taka football, but I want there to be an energy in the team, where they play and excite the fans. I want energy, hard work and aggression.”

“4-3-3 would be my preferred system, without a doubt, but I want us to be flexible. I don’t want it to be set in stone. It is important to look at the attributes of the players because to play 4-3-3 without wingers would be ridiculous.”

What they said: “Only a manager with great potential can organise a team to play that way” – Jose Mourinho after Derby’s win at Old Trafford.

The former Arsenal striker wasn’t in the job for a month before he was offered his first vote of confidence. “Thierry Henry came for the long term, he is not a firefighter,” vice president Vasilyev Vasilyev said after a 4-0 thumping by PSG made it six games and no wins for Leonardo Jardim’s successor. PSG will take most sides in Ligue 1 apart, but that it followed the same scoreline against Club Bruges in the Champions League led to some calls for Monaco to look for a more experienced coach. Most would struggle in the circumstances Henry is operating in. Morale plummeted long before his appointment, while injuries – 16 at the last count – continue to pile up. If the Frenchman was looking for an easy ‘in’ to management, this certainly wasn’t it but the romanticism lured Henry in. He was criticised for naive tactics in his opening game – a 2-1 defeat to Strasbourg – and against PSG, he said Monaco will “try to go back to basics”. Henry needs ideas and quick.

What he said: “Pep is the reference, for me” – upon being appointed

“I had said before the match that it couldn’t get any worse – and now it is! It is always the same story: we have chances, we concede goals and we lose players. Of course the team is affected mentally and you see it with some basic errors” – after the PSG defeat

What they said: “I would have turned down the role at Monaco. The situation is very dangerous for a first job. He knows Monaco well and he knows football especially well. But this does not feel good” – Laurent Blanc

“Thierry has the right understanding, the right knowledge. But, there is always two aspects as you come in as a new manager. The first impact is psychologically positive, and then you can work. At the moment, the bad luck for him, is that the first impact has not worked so he will have to be given time, that is the most important thing for him. He will get it right if he is given time” – Arsene Wenger

Why the Monaco squad have faith in Thierry Henry pic.twitter.com/3nxSgvmrBM

Barton’s Fleetwood occupy the top half of League One by virtue of goal difference after a wildly inconsistent start to his first season in management. The once-capped former England midfielder was announced as new Fleetwood boss in April though he was not able to start work officially until an FA ban for breaking betting rules expired in June. There was still time to make 10 signings, including Ched Evans and Dean Marney, and perhaps that turnover goes some way to explaining their unpredictability. At no point since August have Barton’s men put two wins together and even then, the Carabao Cup win over Crewe came after a penalty shootout.

What he said: “Do people want me to fail? Well, yeah. Probably 30 million, if you split the country in half. If you go to Scotland, it’s probably five million. And there are only five million people in Scotland.”

What they said: “Joey not only brings a host of experience and profile, but I also feel he has the potential to become one of the best in the new generation of coaches. He’s someone I’ve known for a number of years and I’m convinced he’s ready to make the step into management, and that he will be a huge success” – chairman Andy Pilley