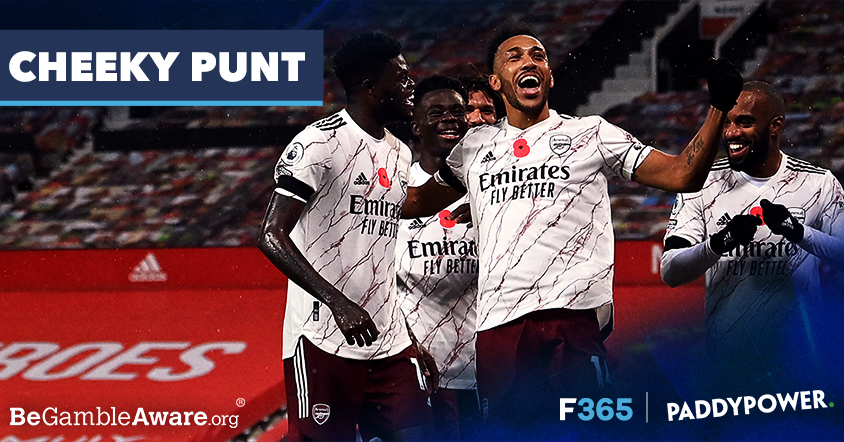 Cheeky has gone for some interesting bets this weekend. If you like all his tips, Paddy Power’s Acca Insurance will refund all punters whose 4+ bet accumulators are let down by just a single selection.

Burnley are averaging a sizzling 0.5 goals per game so far. Talk about getting the weekend off to a mad one! And it’s on Sky Sports Box Office. Come for the spiteful tactics. Stay for the shite 0-0.

Betting: No Goalscorer at 17/2 (Paddy Power)

Two teams who have been clowning me all season long on the coupon meet at St Mary’s. Ralph Hasenhuttl’s team head into this game on the back of a five-game unbeaten run in the Premier League, having recorded four wins in the process. They are scoring goals for fun too, and while they should win this, you can’t rule out Steve Bruce’s defensive dogs of war grimly lockjawing onto their opponents for 90-odd minutes and claiming a point. So it’s with zero confidence at all that I tip up the Saints to win a tight ‘un.

Betting: Southampton to win to nil at 23/10 (Paddy Power)

United are already nine points off the top. The last time they started a league season this badly at home, they finished 18th. They struggle to breaks teams down and look a very expensive but very one-dimensional side at the minute capable only of playing effectively on the counter. That could still be good enough here, given how shit Everton have been in their last few games. The Blues unbeaten start to the season came to an end at Southampton and they followed that with a ropey old defeat at Newcastle United on Sunday. I fully expect them to wither here like a flower in a furnace.

Leeds should be too hot for Palace here, who don’t score enough goals. Although nothing would surprise me. In fact not I’m sure what’s been crazier this week, the US election or me finding out Gary Pallister finished in 21st spot for the 1991 Ballon d’Or, an award won by Jean-Pierre Papin. Little-known fact: he once bought me a Bulmer’s in the Black Bull in Yarm (that’s Pally, not Papin).

Frank Lampard has hinted that he will stick to a 4-3-3 formation at Chelsea and that could be bad news for The Blades, who have picked up just one point from a possible 21 so far. The Blues can move back into the top four with a win and I don’t hate the even money available about them beating the South Yorkshire strugglers by more than a goal.

£14.95 to watch West Ham v Fulham. You can get a steak dinner for that in Hartlepool. Or half a pint of Moretti in west London. Home win, but I’ll be listening on the wireless thank you very much.

Spurs have made a cracking start and can keep the pressure on by winning at The Hawthorns. The Baggies suffered a hammer blow when slipping to that 2-0 reverse against Fulham. They were pretty poor in that one so will probably not fancy an hour and a half chasing Harry Kane and the gang around this weekend.

The Foxes are flying and their title odds were cut after that fabulous 4–1 win at Leeds. And do you know something? If I live to be 100 I’ll probably never tire of watching Jamie Vardy cutting about on a football pitch harassing defenders and referees, face like a demented ferret.

Betting: Both teams to score in first half at 4/1 (Paddy Power)

This weekend’s trip to the Etihad will clearly be Liverpool’s most severe test of a fascinating season so far, certainly since the champions were deprived of skipper Virgil Van Dijk. Yet despite their fabulous display against Atalanta on Tuesday, the bookies have City at a shade under even money to win what would be a hugely significant encounter. And given their insipid start – 11 points from 6 games – this is a game they dare not lose. Yet it’s not the game Sky will hype it up to be. Both teams have had some horrendous rub when it comes to injuries. Indeed this should be billed as Pep Guardiola’s weakened attack vs Jurgen Klopp’s weakened defence. Who edges it? I’m going to sit my arse firmly on the fence here as I cannot separate them.

Villa lost a thrilling five-goal encounter with 10-man Arsenal at the Emirates last September, and in truth were unlucky on the day. They are unbeaten away from home so far having done the business against Fulham at Craven Cottage and Leicester at the King Power. However the Gunners should be reaching the highest level possible on the old Swag – O – Meter after that 1-0 win at Old Trafford. The  ‘Arteta Out’ brigade seem to have gone very quiet as most Arsenal fans begin to trust the process. Not sure they can keep a clean sheet here but they can claim three valuable points.