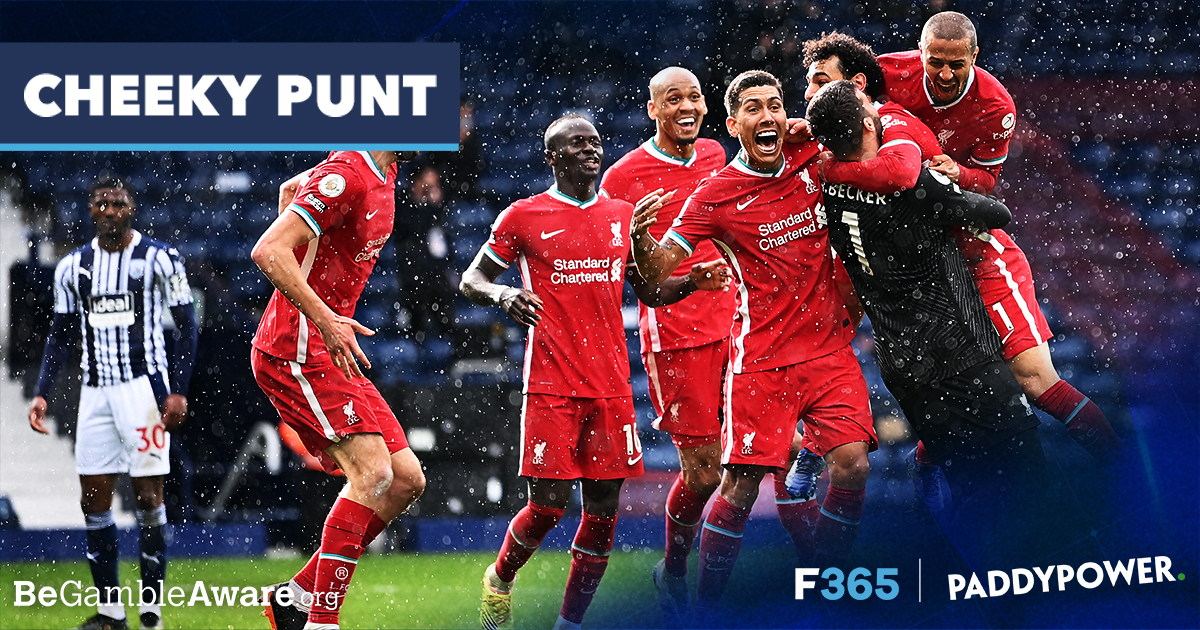 Cheeky is back with ten midweek Premier League tips, including one in Chelsea v Leicester City, a repeat of last weekend’s the FA Cup final.

If you like all of Cheeky’s picks, Paddy Power’s Acca Insurance will refund all punters whose 4+ bet accumulators are let down by just a single selection.

Manchester United v Fulham
By the time you read this, pubs and restaurants will be back serving inside and at long last I won’t have to worry about a seagull sh**ting on my mixed grill. The home win should be an absolute penalty-kick here and it’s not surprising to see the hosts at 4/11. However, Manchester United have now lost six Premier League games at Old Trafford this season. That’s more than in the previous two seasons combined. Shaggers! They don’t have much to fear in Fulham though, a team that have only won three out of 18 on their travels this season. Am still getting my head round the fact that Fred is in the top five most expensive central midfielders in Premier League history. He was poor against Liverpool and Roy Keane’s withering “as long as those two are playing centre midfield for Manchester United they will not win major trophies” assessment on the Brazilian and Scott McTominay was cold as hell. Not sure Fred starts on Tuesday, but Marcus Rashford should feature and I don’t hate the 4/1 on him scoring first.

Southampton v Leeds United
Fair play to the Saints, who landed a 14/1 winner for us at the weekend after beating Fulham 3-1. Leeds are ending the season with a real flourish though. In their first season back among English football’s elite since way back in 2004, the Yorkshire giants are fully 26 points clear of the relegation zone. They have scored 32 times away from home, a total bettered by only four other teams in the Premier League. Marcelo Bielsa could walk into any chippy from Headingley to Beeston and wouldn’t have to pay for cod and chips. They’d all probably throw in a pickled egg as well; that’s how good Leeds have been this season. A proper breath of fresh air.

Brighton v Manchester City
At first glance 4/9 for Man City to win here looks more than fair. They have a 100% record against Brighton in the Premier League era (seven wins out of seven) and while I’ll never be mistaken for Carol Vorderman when it comes to maths, there is a 45-point gap between the teams in the table as it stands. With a Champions League final on the horizon however, the priority for Manchester City must be to avoid any injuries ahead of the big one in Portugal. City have nothing to prove to Brighton and the Holy Grail for Pep is turning their recent domestic dominance into European success. After his hat-trick heroics on Tyneside, Ferran Torres is 11/5 just to score on the south coast. If he starts, and well he might, that’s some price.

Chelsea v Leicester City
Youri Tielemans pinged home one of the great FA Cup final goals to give Leicester City the trophy for the first time in their history with that 1-0 win over Chelsea at Wembley. It was a great final, without ever being a great final, wasn’t it? Gary Lineker: “My dad went to all four finals. I hope he’s up there watching.” Hit me right in the feels that did, Gary. If all that emotion and excitement wasn’t enough, just three days later the same teams meet again in a huge game in the race to finish in the top four.

After their surprise home defeat to Arsenal, Chelsea still need six more points from their remaining Premier League games – this one and Aston Villa away – to guarantee a top-four finish. Leicester’s victory against a much-changed Manchester United has put them within touching distance of Champions League qualification – just four points from their remaining two matches will be enough for the Foxes. It’s all set up very nicely for Tuesday. Leicester could be backed at 3/1 at Wembley and value-hunters might fancy them again.

However, as Thomas Tuchel pointed out, the Blues didn’t play badly at all on Saturday. It was more a case of them not getting any rub. Chelsea might have lost their last two, but the former Paris Saint-Germain boss has suffered just four defeats in 27 matches in all competitions since taking over from Frank Lampard. Having already recorded big wins over the likes of Spurs, Liverpool, Atletico Madrid, Real Madrid and Manchester City, I wouldn’t put anyone off backing the Blues here in a game that is unlikely to feature a lot of goals.

Everton v Wolves
Wolves are going to finish in their lowest position since returning to the Premier League in 2018/19. Scoring goals has been their biggest issue. Wolves have failed to score in 12 Premier League matches this season, and I reckon Everton winning without conceding could be the shout at Goodison.

Betting: Everton to win to nil at 2/1 (Paddy Power)

Newcastle United v Sheffield United
The Blades beat the Magpies back in January, one of just six wins they’ve managed in what has been a horrible season. Their away form in particular is absolutely honking, having claimed just two wins in 17 games. Joe Willock is 10/1 to score first here and that’s a price I just can’t get my napper round. He’s scored five goals in his last five games. 10s is massive.

Tottenham v Aston Villa
Interim head coach Ryan Mason will have been delighted by the purpose and poise that Tottenham exhibited against Wolves and more of the same here should see them claim three points against Villa. It’s hotting up in the Golden Boot race. Harry Kane and Mo Salah are deadlocked on 22 goals with just two matches remaining. Between them Salah and Kane will have won five of the last six Golden Boots, which just shows how consistently awesome they’ve been over the last few seasons.

Crystal Palace v Arsenal
Oft-maligned for his plodding, workaday style of play, Roy Hodgson has comfortably kept Palace in the Premier League during his four seasons at the club, and for that you have to take your hat off to the 73-year-old. Palace have been scoring a few goals in recent weeks and they look a decent outside shout here at 5/1. Palace winger Wilfried Zaha scored his 11th league goal of the season on Sunday, his best return in a top-flight campaign, and he can help the Eagles see off Arsenal.

Burnley v Liverpool
Alisson to the rescue at the death for the Reds on Sunday was a proper WTF moment. The four minutes of injury-time had been played and all bets were off. It means Champions League qualification is still in their hands and they will be confident they can brush past Burnley at Turf Moor. Liverpool have now won six of their last eight Premier League games (D2), and are getting results when it matters. This reeks of a workmanlike 2-0 job.

West Brom v West Ham
Tough match to call this. West Brom have only managed to keep four clean sheets since Big Sam Allardyce took over the club in late December. Yet on the other hand West Ham have fallen away badly after looking to have a real shout of finishing in the Champions League places just a few weeks back. One win from their past five Premier League games tells its own story and the draw actually looks a big runner here at the Hawthorns.