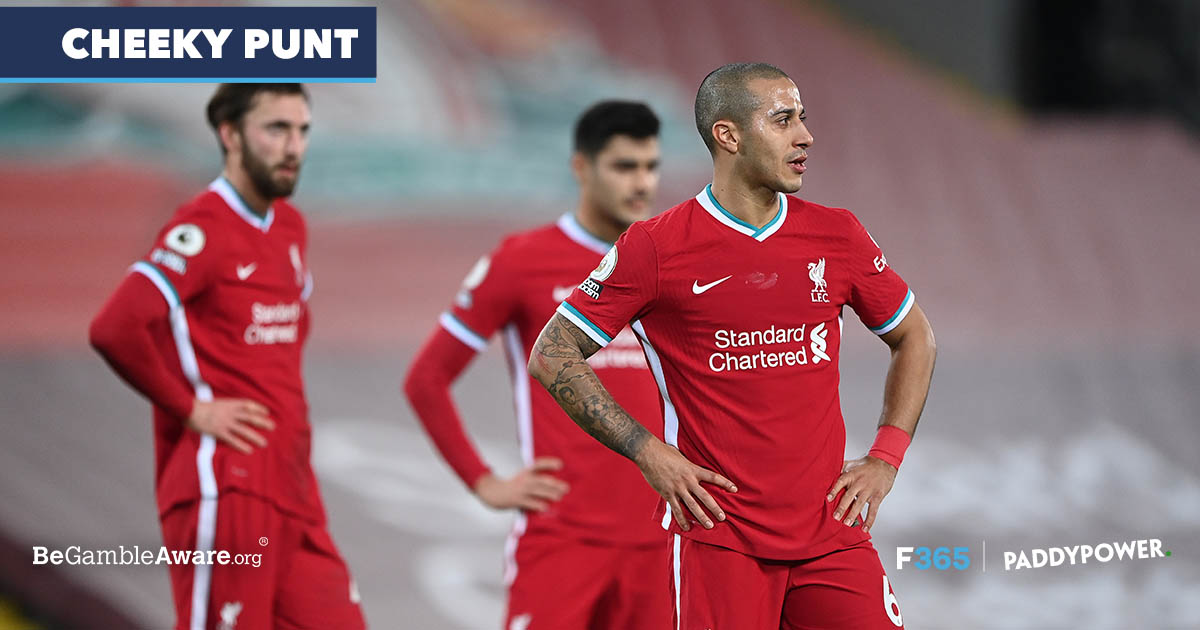 Cheeky is working double time this week as he returns with some midweek Premier League tips, including one in Liverpool v Chelsea. If you like all of Cheeky’s picks, Paddy Power’s Acca Insurance will refund all punters whose 4+ bet accumulators are let down by just a single selection.

Manchester City v WolvesSaturday’s win over West Ham was Manchester City’s 20th consecutive win in all competitions. They are 1/200 to win the league now, in the Carabao Cup final, favourites for the FA Cup and the Champions League. Yet you just wonder how much better things might have been if Pep had taken Richard Keys’ advice from October and hired Sam Allardyce as a defensive coach. The one that got away, right (rolls eyes)? Wolves are unbeaten in their last three, but their display in that weekend draw with Newcastle whiffed of negativity.

Burnley v Leicester City
The Foxes looked absolutely shattered on Sunday and barring Liverpool, have had to contend with the worst injury crisis of any team in the top flight this season. They look to be running on empty and I will not accept they are 11/10 to win at Turf Moor. Horrendous price. The last time I saw something like that, I flushed it.

Sheffield United v Aston Villa
It feels like the game is up for the Blades. Injuries are mounting for Chris Wilder as the spectre of the drop looms ever larger. They have been largely unrecognisable from the team of 2020/21 that metaphorically bloodied the nose of many a Premier League foe. Away win.

Crystal Palace v Manchester United
Palace were awful last time out against Fulham. Really terrible. On the plus side they could have Wilfried Zaha back for this. Zaha has been absent since picking up a hamstring injury against Newcastle at the start of February. But even with Zaha fit the away win looks the logical shout here. The Red Devils are 12 points behind Man City but should at least be on the front foot here. Too often this season Ole has set them up not to lose against Big Six opposition, and that Chelsea game on Sunday was sh**e by the way.

Betting: Manchester United to win by exactly one goal at 12/5 (Paddy Power)

Fulham v Tottenham
Tottenham have been ropey as f**k for months. But Gareth Bale has come alive in recent weeks. Four goals and three assists in his last four games. Fulham are playing some decent stuff as they battle to avoid the drop. Scott Parker was delighted with his side’s display against Crystal Palace and insists they fear nobody in the league. He is obviously telling porkies there but there’s been enough from them in recent weeks to suggest they could yet survive. Bale – clearly buoyed by news that golf courses are re-opening – is on fire though and can help Spurs to victory here.

West Brom v Everton
I was genuinely waiting on both teams to score in the West Brom v Brighton game on Saturday for £379. Shambles is not the word. Two missed penalties and an absolute shocker from Lee Mason, who ruled out, then gave, then ruled out an equaliser as VAR peaked. For that to happen at this level is absolutely unforgivable. Mason should do the right thing and move to Uganda and start selling Cryptocurrency. I’ve not had a bet since. In the words of the irascible Oscar Wilde ‘The world is a stage and the play is badly cast’.

Liverpool v Chelsea
As the Last Outlaw of sports gambling I’ve been asked by a few local cats what the midweek banker is. And this is it. Chelsea to beat Liverpool. Liverpool’s patchwork defence has been big news all season and with Jordan Henderson now missing as well they look ripe for the plucking at Anfield. Rumours persist that Steven Gerrard is being lined up to replace Jurgen Klopp as Liverpool boss. I personally don’t see it but I do see Chelsea claiming all three points while the Reds field their 127th centre-back pairing of the season.