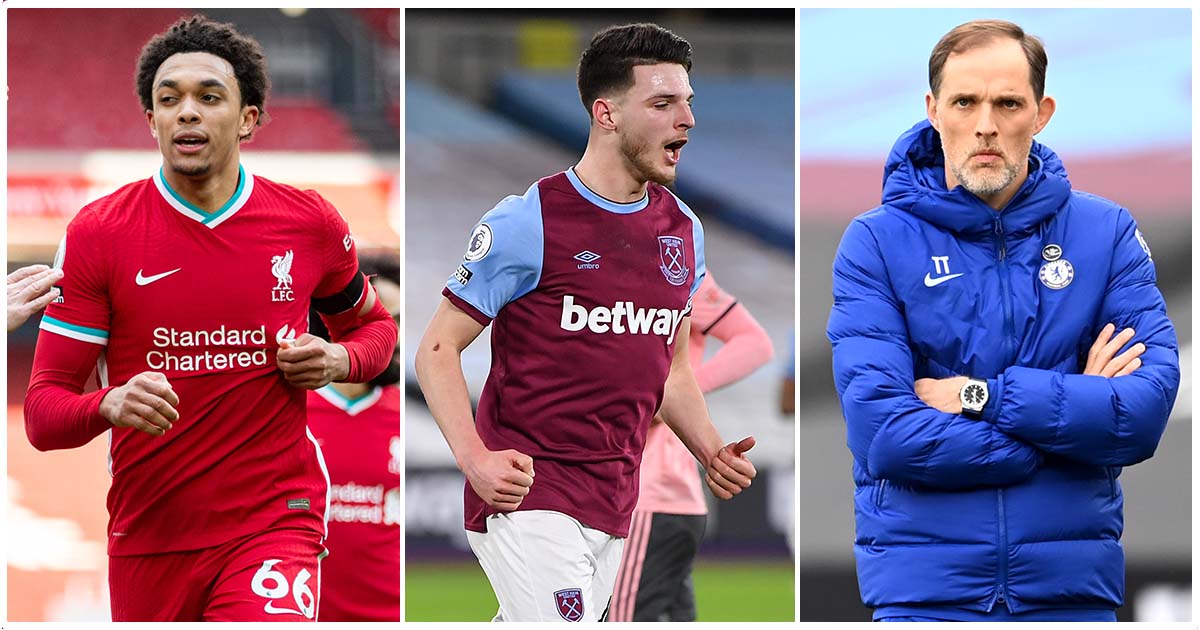 Cheeky is back with eight Premier League tips. Plus, the biggest day in the football calendar is here as Chelsea and Leicester go head to head in the FA Cup final. If you like all of Cheeky’s picks, Paddy Power’s Acca Insurance will refund all punters whose 4+ bet accumulators are let down by just a single selection.

Newcastle United v Manchester City
For the first time in the Premier League era all the relegation places were confirmed with three games to go. The title race has already been run too. In fact I am struggling to remember a more underwhelming end to a domestic top-flight season. Suave, sophisticated serial winner Pep Guardiola reckons his team becoming 2020/21 Premier League champions has been the hardest of the three titles he has won with the club. Pull the other one, Pep me old son. Some might fancy a piece of Newcastle here at 10/1 if City have been out on the lash to celebrate their latest title win. Not me though. Sergio Aguero is 3/1 to score first. Man City’s most decorated player now with 15 trophies. Man City’s record goalscorer with 258 goals. Panenka or no panenka, they just don’t make em like this f**ker anymore.

Burnley v Leeds United
Leeds won the corresponding fixture 1-0 a couple of days after Christmas and with Burnley now safe they are another team who could be playing this weekend while collectively still technically over the legal drink drive limit. Big respect to Sean Dyche, who has delivered once again for Burnley. Leeds were a huge price against Spurs last Saturday though, and I wouldn’t put anyone off backing Bielsa’s troops here at 13/10. As an aside, just double-checking that Bozza had said hugs from next week but no dancing at weddings? How the f**k is doing the Macarena then slut-dropping straight into Cotton-Eyed Joe at Sandra and Tommy’s wedding going to adversely affect your health? Other than give you a stitch?

Southampton v Fulham
Five wins in 35 matches means Fulham are going down and few could argue that they don’t deserve it. They were also lucky not to be docked points for Scott Parker’s shambolic jacket/cardigan combo v Arsenal recently. Is he the first Premier League manager to go down wearing a cardigan?

Brighton v West Ham
Chelsea have left the door ajar for West Ham in the battle for fourth. The Blues remain fourth on 64 points but that unexpected midweek loss to Arsenal has given the Hammers, and Liverpool, renewed hope. The big problem for David Moyes and the boys this weekend is the fact they’ve yet to beat Brighton in the Premier League in seven previous attempts (three defeats and four draws). Declan Rice should return for them and that makes me confident they can get a result. He is some player. Defends well. Powerful. He’s beautifully-balanced for a lad of his size. He’s 14/1 to score first and while you may think this is unlikely, I don’t. Rice would shit in your kettle at a house party. And you’d do f**k all about it (except maybe buy a new kettle).

Crystal Palace v Aston Villa
Villa have won their last two against Palace, and cruised to a 3-0 win earlier this season against the Eagles. Jack Grealish is likely to play some part after three months out. England fans will be hoping Dean Smith can get him match fit before he explodes into life at the Euros, carrying the Three Lions to their first major tournament win since forever.

Tottenham v Wolves
Can’t really be smashing Spurs here at 4/9 can we? Wolves beat the north London outfit 3-2 away last season while the teams played out a 1-1 draw at Molineux back in December. There could be goals, and with zero statistical existence to back up my claims I’m going to lump on both protagonists scoring in the second half at the Tottenham Hotspur Stadium.

Betting: Both Teams to Score in Second Half at 11/4 (Paddy Power)

West Brom v Liverpool
When these two met earlier in the campaign, just after Christmas, Liverpool were starting to look more and more like reigning champions and had opened up a four-point gap at the top of the Premier League table. Fast-forward to May and the Reds are now outside of the top four after enduring a torrid few months. The Baggies are also Jurgen Klopp’s bogey team. Indeed Liverpool have actually failed to win any of their last four meetings with West Brom, who will be back in the Championship next season. With such a poor recent record I’m not sure who is going to get stuck into the away win at 2/9. That looks a lamentable price on paper, so instead I’m going to grab me some Trent Alexander-Arnold score anytime action at 6/1.

Everton v Sheffield United
Strange old side Everton, aren’t they? A home defeat to a hopelessly out of sorts Aston Villa was sandwiched between two impressive wins on the road against Arsenal and West Ham. They face a Blades outfit who are averaging 0.5 goals a game this season. That’s just unforgivable.

Chelsea v Leicester City
This weekend’s 140th FA Cup final could be an underrated classic. You have a bang-in-form Chelsea (apart from Wednesday’s horror show that the gaffer said was on him due to making too many changes) facing off against a Leicester City side who continue to punch well about their weight. I’ll never, ever get used to, or totally accept, the 5:15pm kick off time though. I was brought up on six-plus hours of Cup final day television. The Road to Wembley. Interviews with Cilla Black and Little & Large. The full Monty. No X-Boxes or Instagram in them days boyo. Just the dulcet tones of Des Lynam following the team buses down Wembley Way. Sir Stanley Matthews knew all about social distancing. Nobody could get near him.

Anyway, I digress. Leicester have enjoyed a phenomenal season under Brendan Rodgers. As well as making the FA Cup final, they are in with a real shout now of finishing in the Champions League places for next season. It’s their first FA Cup final appearance since 1969 and they won’t be here just to make up the numbers. That said, with a Champions League final appearance already in the bag, and a top-four finish still looking likely, Tuchel’s revolutionised Chelsea are deserving jollies here. They saw off quadruple-chasing Manchester City in the semis, and can land a first major trophy of the Tuchel era by winning in 90 minutes. Kick back on the sofa and enjoy. Never mind what Neville and Carra try to tell you, it’s still the biggest day in the football calendar.