Home Arsenal Cheeky punt: Back Costa to continue his run 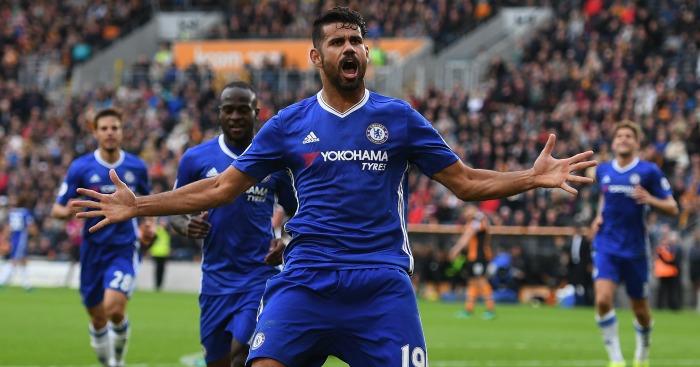 Chelsea v Leicester City
After one of the more p**s poor international breaks in recent memory the Premier League returns this weekend and what a game to kick us off. Chelsea have been forced to deny rumours that boss Antonio Conte is set to leave the club after several leading bookmakers suspended betting on the Italian leaving Stamford Bridge on Thursday. I don’t know what the Italian is for ‘no smoke without fire’ but it’s clear all is not well at Chelsea, a club that failed to win a Premier League game in September. I have a hunch though they might be too hot for champions Leicester and Diego Costa, who has started the season brilliantly (he’s the PL top scorer so far with six), might be worth a punt to get among the goals.
Betting: Costa to score first and Chelsea to win 2-1 at 25/1 (Bet Victor)

Arsenal v Swansea
Big Bob Bradley is now the new coach of Swansea and the baldy American will be hoping his new ‘soccer crew’ can cause an upset in North London. I can see Bradley now in the dressing room before this one, giving an impassioned pre-match talk to his players, breath stinking of pickles and pastrami. Alas it will be in vain. Swansea may be unbeaten in their last four trips to the Emirates (winning three times and drawing once) but Arsenal have won their last five and look ominously strong at the minute.
Betting: Arsenal to win to nil at 11/10 (Stan James)

Bournemouth v Hull City
Mike Phelan was finally given the Hull gig on a permanent basis on Thursday evening but I see this being a rather short, inglorious reign. His squad is simply too small for the rigours of Premier League life and after a bullish start the Tigers have now lost three in a row in the league. Eddie Howe has got Bournemouth motoring again after a ropey start and they look a bet here on the south coast.
Betting: Bournemouth to win and both teams to score at 16/5 (Coral)

Manchester City v Everton
If there was ever a time to go to the Etihad, now might just be that time. City have failed to win any of their last two games and have conceded five goals during that period (including three against a bang average Celtic). Worse still, Pep Guardiola has only binned the f*cking WiFi in the dressing room and his players aren’t happy. I mean, surely you can prepare for a top level game AND keep up with the latest escapades of Courtney off TOWIE on Snap Chat can’t you? If not, the world’s gone mad bruv.
Betting: 2-2 Draw at 16/1 (bet365)

Stoke City v Sunderland
Huge game at the bottom this. Put simply, if Stoke lose to Sunderland I reckon Sparky Hughes gets the sack before the highlights of the game are shown on Match of the Day. It’s second bottom against bottom here, and something has to give. With so much at stake though I think pragmatism will out and this one reeks of a low-scoring stinky s**t sandwich of a game.
Betting: Under 1.5 goals at 12/5 (Betfred)

West Brom v Tottenham
At the Hawthorns the Baggies are without a win in any of their last six top flight meetings with Spurs. Indeed nine out of 20 Premier League games between the clubs have finished all square so the draw at 14/5 here is just sat there in a skimpy negligee, winking at me.
Betting: Draw at 14/5 (bet365)

Crystal Palace v West Ham
It’s all going t*ts up for West Ham I’m afraid. They’ve lost five out of seven in the league so far and shipped more goals than any other Premier League side during that run. In stark contrast Palace have looked absolute sex in recent weeks. Unbeaten in five and looking pure fire up front these days, I reckon they should be the cornerstone of any coupon this weekend.
Betting: Crystal Palace to win at 23/20 (Betfred)

Middlesbrough v Watford
Boro’s recent form has been as worrying as the town’s teenage pregnancy statistics and Watford, led by the irascible Troy Deeney, look at bet here at fancy prices.
Betting: Watford to win and both teams to score at 13/2 (Coral)

Southampton v Burnley
Both teams have endured their troubles in front of goal this season and while the Saints have lost just once in 14 meetings at home to Burnley my hunch is to jump all over both teams to score here at odds against. So let’s do that.
Betting: Both teams to score at 5/4 (Coral/Hills)