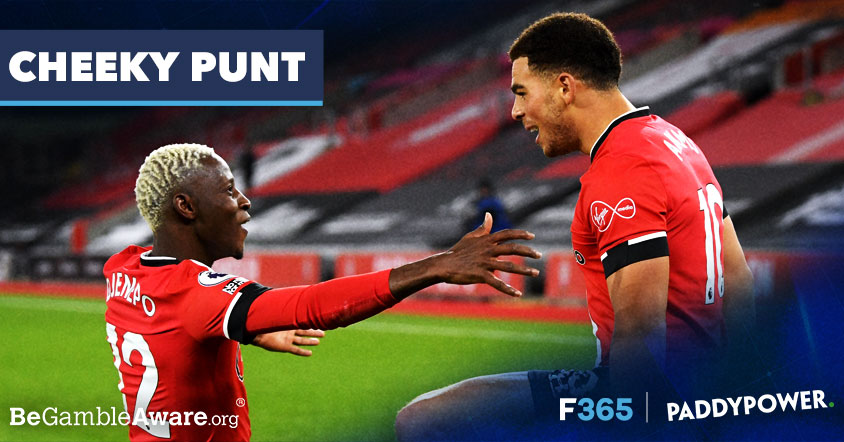 It’ll be an interesting weekend if all Cheeky’s tips come in. And we don’t just mean for him. If you like all his tips, Paddy Power’s Acca Insurance will refund all punters whose 4+ bet accumulators are let down by just a single selection.

Crystal Palace v Newcastle United
Two teams who continue to blow hot and cold meet on Friday night in a game that looks tough to call. The Eagles are tentative picks given how poor Newcastle looked last time out against Chelsea. Best put-down of Steve Bruce following their 2-0 defeat to Chelsea on Twitter was definitely ‘he’s not even a manager, he works the doors in The Strawberry’. Palace continue to refute suggestions they are too reliant on Wilfried Zaha, but they slipped to a 1-0 defeat without the Ivorian at Burnley on Monday and the evidence is compelling that they are simply not the same team without their maverick forward. Speaking of mavericks, there was sadness across the world this week after the death of Diego Maradona, the eternal genius who for Cheeky Punt’s money was the greatest f**king player ever to pull on a pair of boots. RIP Don Diego.

Brighton v Liverpool
I have to say am slightly shocked that Liverpool are still odds-against to retain the league title. Even though they’ve played a game more, they are eight points ahead of Manchester City and sitting pretty despite a makeshift defence. They won 3-1 at the Amex in July and have indeed won all four of their visits to the ground. They will fancy the job again here against a team who have registered just two wins from nine and who do not score many goals.

Manchester City v Burnley
Man City’s 2-0 defeat to Spurs last weekend (tipped up on these very pages) saw them drop points for the fifth time in eight Premier League games this season. Despite this, Pep Guardiola seems to avoid criticism from certain sections of the media. For the size of their squad, the depth of talent and the money spent the cold hard facts are that they have scored just 10 times in eight league outings. Happily for City fans, Burnley are a team they have dished out some real paddlings to in recent seasons and with Sean Dyche’s men struggling for goals, having a decent punt backing Manchester City on the handicaps here should yield a profit.

Everton v Leeds United
Leeds were f**king unlucky not to beat Arsenal last Sunday and probably would have done had they not been carrying my 100 sovs on them at 21/10. They missed some big chances but seem to be OK when it comes to finding the old onion bag away from Elland Road so ‘Over 3.5’ goals looks worth a go on Merseyside against free-scoring Everton.

West Brom v Sheffield United
The Baggies are playing better than their league position suggests and look solid favourites on my tissue to beat a floundering Sheffield United. The Blades were one of the stories of the 2019/20 campaign but have not won in 12 league games and have looked proper shite for the most part this season.

Southampton v Manchester United
The Red Devils were brilliant again in Europe in midweek but laboured to a wholly unconvincing 1-0 win over West Brom last weekend and quite frankly should not be odds on here. Bruno Fernandes and Donny van de Beek are giving Ole Gunnar Solskjaer a welcome selection headache, but whatever side he puts out on the south coast, they are a difficult side to back with any confidence right now. The home win is a decent price in itself, but Che Adams certainly looks over-priced at 7/1 to score first at St Mary’s.

Chelsea v Tottenham
Game of the weekend takes place at Stamford Bridge as these two in-form London giants go to war. Spurs are in rare form and sit proudly at the top of the table, but Frank Lampard has enjoyed decent success against his old boss Jose Mourinho since moving from centre mid to the dugout. Chelsea beat Spurs home and away last season and Mourinho won’t have forgotten, adding extra spice to Sunday’s big clash. Tottenham could well try and park the bus and spring on the counter, much like they did against Manchester City recently, but Chelsea have enough quality in Hakim Ziyech, Timo Werner and Mason Mount to get the job done here and give their own title aspirations a huge shot in the arm.

Arsenal v Wolves
Arsenal are out of the title race after nine games. That’s a preposterous thing to even write, but watching them toil against Leeds last weekend, nobody could convince me otherwise. The bookies seem to be in agreement with Paddy Power now a standout 100/1 about the Gunners winning the Premier League. The clock seems to be ticking on Mikel Arteta and to be honest I have some sympathy with the man. The club got rid of Santi Carzola and Aaron Ramsey while also binning Mesut Ozil and suddenly fans are up in arms that they have scored one goal in five games? They have slumped into the bottom half and Wolves at 13/5 look spicy. The Wolves are a decent side on the road and will always pose teams problems with Raul Jimenez up top.

Leicester City v Fulham
Leicester were poor against Liverpool last time out and that 3-0 reverse at Anfield will have felt like a reality check. They should bounce back here but are far from certain to do so while also keeping a clean sheet, given the fact that the Cottagers have found the net in four of their last five.

Betting: Leicester City to win & both teams to score at 11/5 (Paddy Power)

West Ham v Aston Villa
Villa done me filthy last weekend, knocking a £30 roll up that also contained Norwich, Bristol City and Hartlepool that would have yielded a bag of sand. They’ve been perfect away from home this season, however, winning ever game so far. With this in mind I might row in with them again to win a tight one against West Ham, who’ve not done a lot wrong themselves in recent weeks.