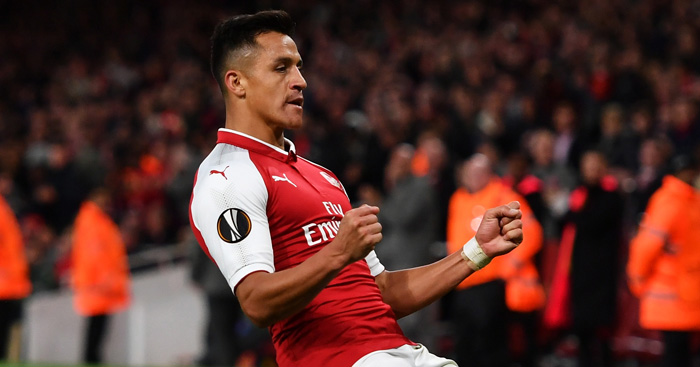 Huddersfield v Tottenham
The Terriers have proved they at least belong at English football’s top table so far this season but face a massive test against in-form Spurs here. It doesn’t help that they’ve failed to score in four of their last five games. Furthermore, it may have been against a load of Cypriot farmers, but how good did Harry Kane look the other night? He’s scored 34 goals in 2017 so far; that’s more than Southampton, Swansea, Watford, Burnley, Stoke, West Brom and Palace have all managed collectively.

Bournemouth v Leicester City
It’s all been a bit shambolic so far for Bournemouth. They’ve lost five of six Premier League games and shipped 11 goals during that run. The Foxes have been struggling too but are at least scoring goals regularly and look a rum old price at better than 6/4 on the south coast.

Manchester United v Crystal Palace
Palace have endured a wretched start and it is likely to get worse before it gets better at The Theatre of Dreams. I have to admit that I let out a hearty and boisterous laugh after reading this week they were lining up a bid for Carlton Cole to solve their crisis of confidence around the old onion bag. That would be the same Carlton Cole who has not scored a goal since 2015, would it not? A colleague said: “Yeah but he was a baller back in the day though, wasn’t he?”

So f**k. So was my dad, a man who now lays horizontally in front of the TV on an evening cupping his own farts and binging on Galaxy Minstrels.

Stoke v Southampton
The Saints are another team struggling for goals and this has all the hallmarks of a complete sh*t-athon. Expect it to be cagey with a capital ‘C’.

Betting: No goalscorer at 8/1 (Betfred)

West Brom v Watford
Watford have already equalled the amount of away wins they recorded in the whole of last season and are a tough assignment on their travels these days. A draw here would not surprise and bet365 might regret going as big as 20/1 about this finishing 2-2.

West Ham v Swansea City
The Hammers’ form has been plenty iffy so far and they look criminally short to beat Swansea. Odds on across the board? Which absolute glue sniffer priced that up?

Chelsea v Manchester City
Chelsea fans have been on their collective high horse since Wednesday’s fine win over Atletico Madrid and the emphatic narrative now among Blues fans is very much, ‘Let’s f**king have a look at ya then, Man City’. It’s the league champions versus the league leaders and at the prices Antonio Conte’s men are definitely the value pick. They did the double over City last season and have enough talent in their first XI to make a mockery of current 15/8 odds about a home win.

Arsenal v Brighton
It’s been a solid week for Arsenal and they can claim a third win in just six days by easing past Brighton at the Emirates. Alexis Sanchez was left at home in midweek – presumably to recharge his batteries, watch some BabeStation and eat salted caramel Haagen-Dazs. The Chilean is 4/1 to score first against the Seagulls and that’s a fair price given he looks to be motivated and of clear head again.

Everton v Burnley
So Everton could only draw on Thursday night against a team that sound like a Spanish hay fever medicine? Ronald Koeman will you get a f**king grip please.

Newcastle United v Liverpool
Philippe Coutinho said this week “I’m here to defend the colours, to give my maximum”, and to be fair he’s been as good as his word in his past few games. The brilliant Brazilian seems to be finally putting all that summer transfer pony behind him and is knuckling back down to some serious graft. Newcastle, you have been warned.

Betting: Coutinho to score and Liverpool to win at 5/2 (Sky Bet)