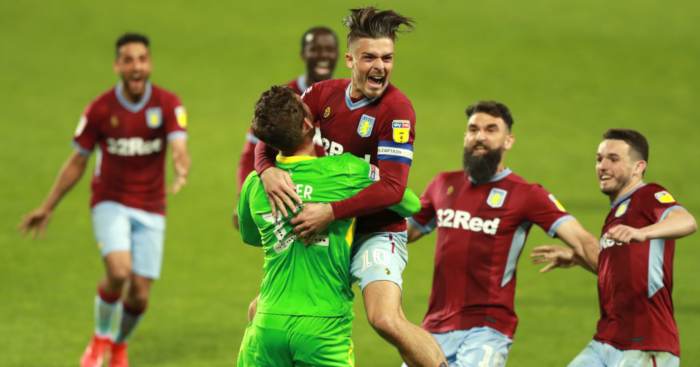 The Rams have experience of losing finals before, to Leicester in 1994 and QPR in 2014. Can they end their 11-year absence from the top flight by winning at Wembley?

To be fair Derby were absolutely inspired as they became the first Championship team to reach a play-off final after losing the first leg at home the other week against Marcelo Bielsa’s Leeds. The shackles came off and their young side put in a stupendous shift to win 4-2 at Elland Road and make a bit of history. The players and Lampard celebrated long into the night we are told, with Lamps rumoured to have squared a £2800 bar bill.

After blowing away Leeds at Elland Road the Rams won’t fear Villa. But they should. Dean Smith’s men have the head-to-head advantage this season, having beaten Derby 3-0 away in November and then 4-0 at Villa Park in March.

It’s sh*t or bust for Villa, who would struggle to sustain their significant overheads if they were forced to endure a fourth season in England’s second tier without any parachute payments. They lost at Wembley last season when Fulham beat them 1-0 but they look a more solid outfit this time round.

It’s been a tough few years for Villa fans. In 2016 they were relegated from the top flight for the first time in 29 years and they’ve not had much to shout about since then. However they clinched their play-off place after picking up 31 points from their final dozen games. Jack Grealish is their creative spark, a Rolls Royce of a midfielder who has been aided and abetted by the excellent John McGinn.

History suggests it could be tight. Indeed for those who like to lump the ‘overs’ it’s worth remembering that either one or both teams have failed to score in the last six Championship play-off finals. But when the smoke clears at Wembley we fully expect Villa to be back in the Premier League promised land.
Betting: Aston Villa to beat Derby at 5/4 bet365

Charlton Athletic v Sunderland
Like Villa, Addicks fans haven’t had much to celebrate in recent years but they were buzzing after that penalty shoot-out victory over Doncaster just over a week ago as Lee Bowyer led his side to Wembley in his first full season in charge.

Let’s have it right, neither Charlton or Sunderland looked overly impressive in their play-off semi, but Charlton finished the season in much better form than the Black Cats, losing just one of their final 15 games (and winning seven of their last eight). The Mackems are draw specialists, finishing all square in no fewer than 20 of their 48 league and play-off games.

Lyle Taylor has been an absolute machine for the Addicks, plundering 25 goals this season and scoring six in his last six. He can be backed at 4/1 with Paddy Power to score first but Charlton at 2/1 to win in 90 minutes looks the bet.

Sunday’s final is a repeat of the 1998 First Division Play-Off Final, am absolute stone cold classic footballing encounter that Alan Curbishley’s Charlton won 7-6 on penalties after a 4-4 draw.

Indeed a bloke who I work with claims he has seen Sunderland at Wembley four times and never seen them win. He puts this down to smashing a mirror in his nana’s house in the late 1970s. However he also claims he once stole of truck full of laboratory chimpanzees and set them free on a beach in Seaham. Suffice to say he’s on a performance improvement plan.
Betting: Charlton to beat Sunderland at 2/1 bet365

Newport County v Tranmere
The first of the games from the Sky Bet EFL play-off weekend comes from League Two, when Newport lock horns with Tranmere.

It should be worth a watch but the draw looks a big runner. There have been three draws in the last four meetings between the teams and defences could dictate in Saturday.

James Norwood has been prolific for Tranmere while Newport have capable duo Padraig Amond and Jamille Matt up top. However it’s been the Exiles’ steel in defence that’s got them to this stage. It’s worth noting that Rovers failed to score in both league meetings with Newport, who have a real solid look about them. They shipped just three goals in their final 10 matches during the regular season and will be bang up for this. Given what’s at stake I wouldn’t rule out a dour 0-0 and the match going all the way to penalties.
Betting: No goalscorer at 13/2 bet365