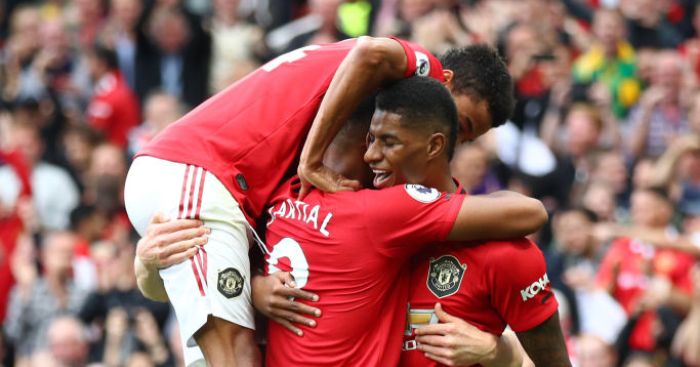 Aston Villa v Everton
Everton are unbeaten so far this season while Aston Villa (who for the record are definitely, definitely not doing a Fulham) are hovering just outside the relegation zone, still without so much as a point on the board. With this in mind, the Toffees – who have yet to concede a goal this season  – look worth a go at 5/4.

Norwich City v Chelsea
Chelsea look criminally short at odds on to win at Norwich. The Blues’ transfer ban has obviously had a massive impact on their summer but the continued absence of Antonio Rudiger has also been a real factor in their poor start. We hear the big German is slowly returning to full fitness but Frank Lampard is unlikely to risk him here so Norwich look live dogs on their own patch at better than 3/1. Cristiano Ronaldo made 196 Premier League appearances and scored one hat-trick. Teemu Pukki has made two Premier League appearances and scored one hat-trick. So tell us Ronnie, who is the real GOAT?

Brighton v Southampton
My grandad always used to say “When one door closes another one opens”. Lovely guy my grandad. Terrible cabinet maker. Two south coast teams who have started the season in contrasting fashion. Brighton are unbeaten after a rapid start and the bounce factor alone could see them over the line here.

Manchester United v Crystal Palace
Manchester United have made an encouraging start to the new season, with Ole Gunnar Solskjaer opting for raw pace up front. United set up in a 4-2-3-1 formation both in and out of possession against Wolves and could have won it if Mr Pogba’s penalty had not been brilliantly turned away by Rui Patricio. Roy Hodgson’s Palace, meanwhile, have yet to score having drawn blanks against Everton and Sheffield United. Marcus Rashford was arguably United’s best player at Molineux and looks a punt to score first at Old Trafford. It doesn’t hurt the bet either that the England man will likely return to penno-taking duties after Pogba’s latest miss.

Sheffield United v Leicester City
Sheffield United – the bookies’ clear favourites to finish bottom this season – sit eighth in the table but face another test of their credentials against an improving Leicester. Anyone who backed the Foxes at 4/1 to beat Chelsea last Sunday will concur they were unlucky in the end, with James Maddison and Jamie Vardy both having good chances to win it at the Bridge. Maddison looks the real deal and can star in a Leicester win this weekend.

Watford v West Ham
Two sides yet to win in their opening two games but preference is for West Ham here on the basis that Watford have looked an absolute bag of sh*t since reaching last season’s FA Cup final.

Liverpool v Arsenal
Well kiss my grits, what a game we have in store on Saturday evening. A real two-hander! This fixture has produced bags of goals in recent seasons: a whopping 44 in the last ten matches to be precise. Arsenal have won their opening two fixtures for the first time in a decade but if we are being honest are fooling nobody and still look too fragile defensively despite their obvious quality in attack. Liverpool of course lost only one league game last season and dished out a 5-1 tonking to the Gunners on Merseyside last December. A punt on Liverpool – BTTS is just sat up begging for the full treatment IMVHO.

Bournemouth v Manchester City
Pep Guardiola was clearly seething after watching his side p*ss all over Spurs last weekend but somehow only come away with a 2-2 draw. Seriously though, how do you cope against this City side? Breathless, brave and dazzling; it seems only VAR can stop them. Eddie Howe reverted to a back four last week to bring Harry Wilson into proceedings so he will likely retain that formation. But it won’t make any difference. Announce heavy beatdown.

Tottenham v Newcastle United
Newcastle were tipped in our ante-post Premier League preview for relegation before the start of the campaign and nothing we’ve seen in two games has altered that view. They’ve looked devoid of ideas and predictable. Under Steve Bruce, as a lot of people said would be the case, they just resemble a Rubik’s cube in the hands of a novice. Put simply, if you don’t have Harry Kane in your FPL team this weekend, then don’t f*cking talk to me.

Wolves v Burnley
Will Wolves be running on fumes by the time they trot out against the Clarets? Three games inside a week would test any squad and during that period they’ve also been to Italy and won. With this in mind the result looks too tough to call so preference is for a tickle on both teams to score.