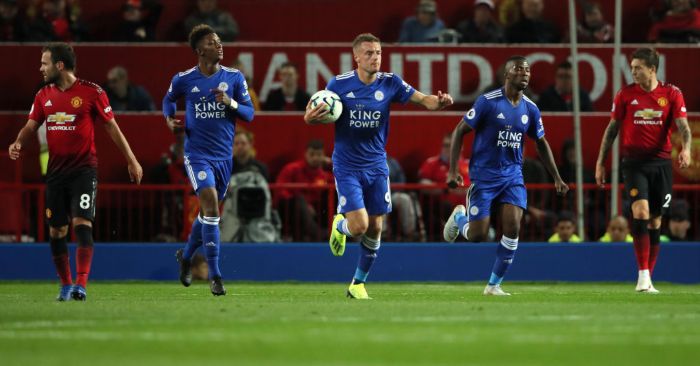 Liverpool v Newcastle United
There is a delicious irony about these two top-flight behemoths duking it out in the same fortnight that Michael Owen and Alan Shearer had major beef over the former’s forthcoming book. Personally I don’t care about the Owen v Shearer feud unless it ends with a death fight in a cage, with glass glued to the knuckles of both protagonists a la 1980s movie Kickboxer. In terms of Saturday’s early kick-off Liverpool are piping hot 1/8 on favourites in places. They have recently set a club-record 13 Premier League wins in a row and are averaging three goals a game. At their Anfield HQ, Jurgen Klopp’s side don’t just beat you these days; they take you to the deepest part of the ocean and drown you.

Manchester United v Leicester City
I can’t have United at odds on here given what we’ve seen so far this season. Leicester are unbeaten (eight points from four games) while the Red Devils are on a three-match winless run. The sub-plot of course is Harry Maguire facing the club that made his name – and changed his life forever – for the first time. Is Slabhead the man to lead Man Utd back to glory? Time will tell. Are the Foxes worth a tickle at 23/10 in the ‘Draw no Bet’ market? You better believe it, toots.

Sheffield United v Southampton
Cards on the table: I thought the Blades were stick-ons for the drop before a ball was kicked this season and duly smashed into them in a series of ante-post accumulators. So when I glance at the table and see they are currently tenth (above Chelsea no less) it is a real kick in the swingers. Chris Wilder’s men, who’ve won ten of their last 13 at home, are probably favourites here too as Southampton don’t travel that well so 7/5 about the home win needs attention.

Betting: Sheffield United to win at 7/5

Tottenham v Crystal Palace
Spurs are out to 50/1 already in the title race after a rough old start. They are seven points behind Liverpool after just four matches and need to shape up ASAP if they want to have a realistic shout at another top-four finish. It won’t be easy against the Eagles, who have a fine recent record away from home against Big Six. They remain the last side to win away at Anfield, the Etihad Stadium and Old Trafford. I’m not brave enough to take the 8/1 about a Palace win here but both teams to score should land without much fuss.

Wolves v Chelsea
Wolves lost 3-2 to Everton last time out but looked a side running on fumes after their European exertions. The international break will have done them the world of good and I cannot fathom how they are priced up around the 2/1 mark given Chelsea’s obvious defensive frailties. There’s leaky. There’s very f***ing leaky. And then there’s this Chelsea defence.

Norwich City v Manchester City
Norwich may already find themselves in the relegation zone but it’s not a fair reflection of their play so far. But then life isn’t fair. If life was fair, people would not still be dying of hunger. If life was fair, there would be no global warming. If life was fair, 94th-minute equalisers to ruin your five-fold would be eradicated. I digress. Can’t look past the champions here, especially with that Rolls Royce that goes by the name of Kevin De Bruyne purring in midfield. Norwich can get on the scoreboard though. With Aymeric Laporte out, Pep will be hoping John Stones is fit else Fernandinho will have to slot in at centre-back. Not ideal, but they’ve got too much quality in attack to let it worry them.

Betting: Manchester City to win and both teams to score at 6/5

Bournemouth v Everton
Bournemouth are struggling with a truly ridiculous injury list so Everton look worth a smash here at 7/5 on Sunday. The Cherries are yet to keep a clean sheet this season while ze Toffees looked a proper handful going forward in that recent 3-2 win against Wolves.

Betting: Everton to win at 7/5

Betting: Arsenal to win and both teams to score at 12/5