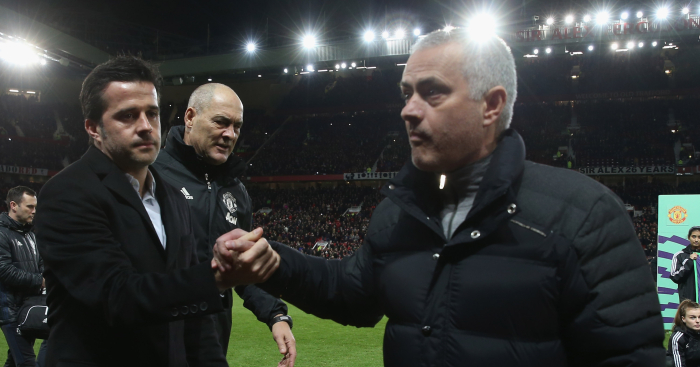 Brighton v Wolves
For those who like a stat: Brighton have beaten Wolves every time they have met in the top flight (six games). Last weekend, the Seagulls also made it back-to-back wins and are looking for three Premier League wins in a row for the first time ever. Could happen too, as Wolves threw in a shocker last time out against Watford. I have to admit it’s surprising to see Brighton chalked up as outsiders here, given their usually solid home form, and I don’t think I’ll be able to leave them alone at better than 2/1. But then I did once have two months’ rent money on Bob Marley to win Stars In Their Eyes in 2001, only to be left bereft as Dusty Springfield sang her little heart out. To this day I still can’t listen to ‘Son of a Preacher Man’ without tearing up.

Fulham v Bournemouth
The Cottagers have been leaking goals with alarming regularity and they’ve actually shipped 12 in their last three matches. Bournemouth will be on the front foot at Craven Cottage and for this reason goals – and plenty of them – look the shout.

Liverpool v Cardiff City
Mo Salah – who plenty on social media were happy to write off as a ‘one-season wonder’ – already has six goals this season. Twitter really is a strange old vessel isn’t it? People spending 15 hours a day desperately seeking validation from absolute strangers. Genuinely chatting more waffle than Birds Eye. The Egyptian King looks a bit short at 1/2 to score anytime against Cardiff, so napping 3-0 at 11/2 instead might be the way to go.

Southampton v Newcastle United
It’s going from bad to worse for the Toon, who are now as short as 15/8 to be relegated. Will Rafa be given some funds to beef up the squad in January? If it doesn’t happen, I’m not sure how they stay up as they’ve been an absolute shower of sh*te so far. And if Danny Ings can locate his scoring boots, Southampton look a cracking price to dust a Newcastle side who’ve managed just one clean sheet in their last seven.

Watford v Huddersfield Town
Watford look like the top-flight bankers of the weekend. They should be the cornerstone (along with Barcelona to beat Real Madrid) of any accumulator. They were excellent in winning at Wolves while the Terriers are just not scoring goals, and if you are averaging less than 0.5 goals a game – which they are this season – you are not going to win many football matches.

Leicester City v West Ham
The free-scoring Foxes have notched in all nine league games this season so look a bet at odds against to beat a West Ham team who’ve failed to score in four of their last six. It’s three goals and two assists in just 721 minutes of top-flight football for James Maddison thus far, who is looking one truly sexy bit of summer transfer business.

Burnley v Chelsea
Halloween next week eh? If you think I’m just going to switch the lights off, ignore the door and watch Netflix in bed while eating all the f**king sweets…then you’d be right. Eden Hazard missed Thursday’s Europa League sojourn but something tells me the Belgian maestro – Chelsea’s top scorer with eight this season – will have made a full recovery to start against the Clarets.

Crystal Palace v Arsenal
It’s 11 straight wins for Arsenal. And that’s not happened since 2007. They still have that swagger up front but don’t look as brittle defensively as they did in the last days of Arsene Wenger. Fair f**king play to Unai Emery. He’s not skulked about the place with his head down like he’s wearing dead men’s trousers. He’s given the players the confidence and the belief to express themselves, and they can make it a round dozen wins on the spin by beating Palace here. Also, while I’m here, just how does he keep his hair so shiny?

Manchester United v Everton
Well done to the Red Devils for completely ruining my Saturday last week with that 2-2 draw at Chelsea. But can they really be trusted at odds on here? I mean, where are the goals coming from? Danny Welbeck for instance has now scored more club goals than Romelu Lukaku this season, despite Lukaku having over 800 minutes more game time. Everton, who have won their last three, are no jokes and can claim a point at the Theatre of Dreams.