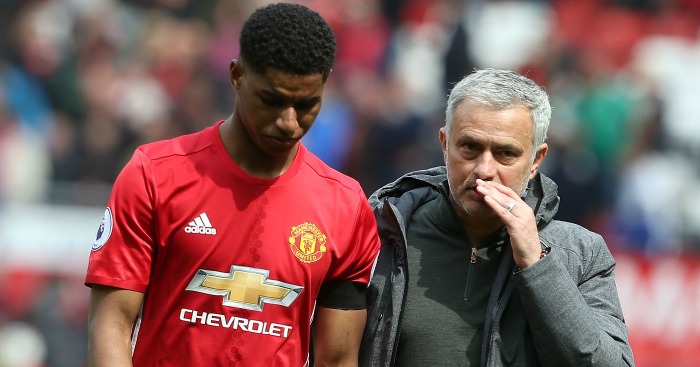 Swansea v Manchester United
Swansea ended last season in fine fashion on home soil but it’s hard to look beyond Manchester United here. Jose Mourinho’s side are far more balanced and fluid since the introduction of Nemanja Matic and Romelu Lukaku and they look good things to get the ‘W’ in Wales. Marcus Rashford was absolutely brilliant against West Ham, a constant threat cutting in from the flanks and he looks to have piled some beef onto his frame without losing any of his pace. For these reasons he looks a fair old price at 17/10 to score.

Bournemouth v Watford
The Cherries are yet to beat Watford in four Premier League meetings and the latter looked excellent going forward in that thrilling 3-3 draw with Liverpool on the opening weekend. At better than 3/1 the Hornets look a temper here. Incidentally if anyone has not heard ‘Barry from Watford’ talking on YouTube about Blue Badge holders you need to get onto it ASAP.

Burnley v West Brom
Both teams kicked off the season with a win but few will have predicted Burnley – who were freely available at 14/1 before the off – doing the business against Chelsea at Stamford Bridge. What an absolute f**king skinner for the bookies that was. Both teams to score is odds against at Turf Moor and not without hope.

Leicester City v Brighton
The Foxes were brilliant for long spells during last week’s 4-3 defeat to Arsenal and if they show the same kind of form on Saturday they will be way too hot for a Brighton side who look short of quality up front. Indeed the more I think about it the more I see Leicester as absolute bankers, so long as they tighten things up a bit defensively.

Betting: Leicester to win and both teams to score at 14/5 (Stan James)

Liverpool v Crystal Palace
Philippe Coutinho is set to miss yet another game for the Reds due to a ‘back injury’ (wonder if you can get a bet on him being fit by September 1?) but they should still have more than enough to see off a Palace side who threw in an absolute stinker against Huddersfield last weekend. Frank de Boer has been talking the talk over the summer but I have a hunch he may be in over his head at Selhurst Park and his boys could take a hell of a beating on Merseyside.

Southampton v West Ham
If anything sums up the mind-boggling amounts of cash currently slushing around the Premier League it is surely West Ham buying Robert Snodgrass on January 27 for £10.7million and then casually advising him on August 17 he is surplus to requirements. Just wow. Backing ‘Under 2.5’ goals at evens looks a gift at St Mary’s as while the Saints don’t give much away at home scoring has become increasingly problematic (they scored at a rate of under a goal a game in the Premier League at HQ last season and drew another blank last weekend).

Stoke City v Arsenal
Obviously you can’t have a proper summer transfer window without Julian Draxler being linked with a move to Arsenal and right on cue this week the Gunners are once again rumoured to be in for the German international. They are without Alexis Sanchez here but still should be able to get it done against Stoke, who look nailed on for a season of struggle. They’ve lost some of their better players and it remains to be seen whether men like Max Choupo-Moting and Jesé Rodriguez will have the fans on the edge of their seats at the bet365 Stadium.

Huddersfield v Newcastle United
Mike Ashley promised to invest “every last penny” into the team when Newcastle clinched promotion in May. Fake news of course, with expenditure only just topping the £30million the Toon received for Moussa Sissoko last season. They have however just signed Joselu from Stoke City for £5million. Way to go, Mike! It will be interesting to see how Steve Mounie goes for the Terriers here. He was immense on debut against Palace last weekend, scoring two and showing he is going to be a nightmare to mark this season, just like his idol Didier Drogba used to be back in the day. 11/2 to score first? We’ll have a bit of that.

Tottenham v Chelsea
I’m getting a bit bored already of the whole ‘Spurs are s**t at Wembley’ shtick and fancy them to dispel the myth on Sunday by finally beating Chelsea at the venue of legends. Dress it up how you want but the fact is Chelsea are struggling. Big time. They’ve just lost to Burnley at home on matchday one, are without Cesc Fabregas and Gary Cahill through suspension and can’t currently tempt Diego Costa from the beaches of Brazil due to him being in a sulk over a text message. If this isn’t the right time to be playing Antonio Conte’s team at home then bejaysus I don’t know what is. The 11/10 for a Spurs victory just stinks of win.