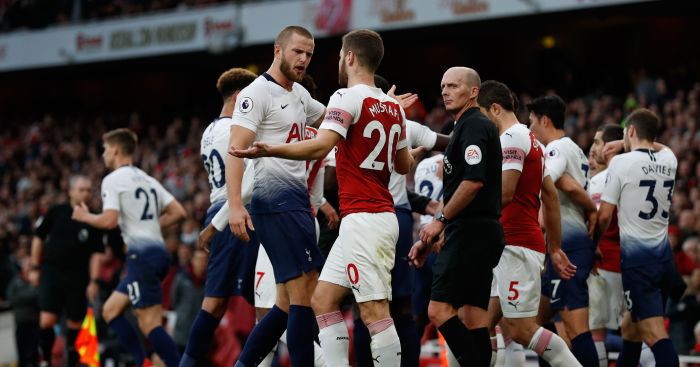 Tottenham v Arsenal
Two teams who endured contrasting fortunes in midweek. Spurs have surely blown any chance they may have had of an unlikely title win after back-to-back away defeats. However, they are a different animal at home (won their last four) and have not lost to Arsenal on their own patch since way back in March 2013. Look for Mo Po’s marauders to end a difficult week by claiming north London bragging rights once again.
Betting: Tottenham to win at 11/10 (Betfair)

Bournemouth v Manchester City
Pep Guardiola’s side flattered to deceive for long spells against West Ham but should be able to put it on Bournemouth here, a team not noted for parking the bus. With just 10 games remaining now we are set for one of the most exciting title run-ins for a long, long while. It really is tighter than a Brock Lesnar headlock up there.
Betting: Raheem Sterling to score first at 9/2 (bet365)

Brighton v Huddersfield  Town
The Terriers got their first win since November in midweek while the Seagulls haven’t won a league game in 2019. This positively reeks of score draw. Even to those who try and cock a deaf ‘un to my libertarian jeers.
Betting: 1-1 draw at 6/1 (bet365)

Burnley v Crystal Palace
I have keys but no locks. I have a space but no room. You can enter, but can’t go outside. What am I?
Betting: Crystal Palace to win at 17/10 (Betfair)

Manchester United v Southampton
What a midweek win that was for a seriously depleted Manchester United side. They still have a few injury concerns, but with home advantage and the mercurial Paul Pogba purring like a Rolls Royce in midfield, the home win looks a stick on here.
Betting: Manchester United to win and both teams to score at 21/10 (888 Sport)

Wolves v Cardiff City
Wolves have been a bit dodgy of late but Cardiff have shipped eight in two games. They are p**s poor. I’m absolutely convinced Wolves win this by more than a goal. Convinced. For I’ve wined and dined with Kings and Queens and slept in the alley eating pork and beans.
Betting: Wolves (-1) to win at 6/4 (Betfair)

West Ham v Newcastle United
Since settling on a front three of Solomon Rondon, Ayoze Perez and Miguel Almiron the Magpies have looked far more potent up top and this is a game that should produce a few goals. Over 3.5 goals is a 5/2 poke and in the immortal words of Giant Haystacks ‘Whereof one cannot speak, thereof one must be silent’.
Betting: Over 3.5 goals at 5/2 (Betfair)

Watford v Leicester City
It would be no shock at all to see Leicester go on a decent run now. They have the players and in Brendan Rodgers (who is either a Celtic legend or Celtic fraud depending on who you now speak to) have a new boss to impress. The Foxes have also won four of their last six meetings against the Hornets.
Betting: Leicester City to win and both teams to score at 5/1 (bet365)

Fulham v Chelsea
So Fulham have pied old Claudio Ranieri off after less than four months in charge? Three wins in 17 matches evidently meant it was time to go, but it remains to be seen whether Scott Parker can galvanise them. I was actually thinking about backing them at bigger than 5/1 this weekend after Kepa-gate, but I’m not sure how much of an upgrade on the ‘Tinker Man’ Parker actually is
Betting: Eden Hazard to score anytime at 6/5 (888 Sport)

Everton v Liverpool
Huge game this and Liverpool know a win would give them some genuine momentum and belief that they might be about to end 29 years of hurt. The Reds were irresistible in midweek, recording their biggest win since March 2018 as they put Watford to the sword. Five assists from full-backs never hurts either and they are rightful favourites for this, the 200th time these Merseyside giants have met in the league. Eye-watering stat time. The Toffees have failed to win any of their last 18 Merseyside derbies in all competitions – and 16 of those have been in the Premier League. Oooof. And after scoring six in his last seven, it’s time once again to do the Sadio Mane Skiffle.
Betting: Mane to score anytime at 8/5 (888 Sport)