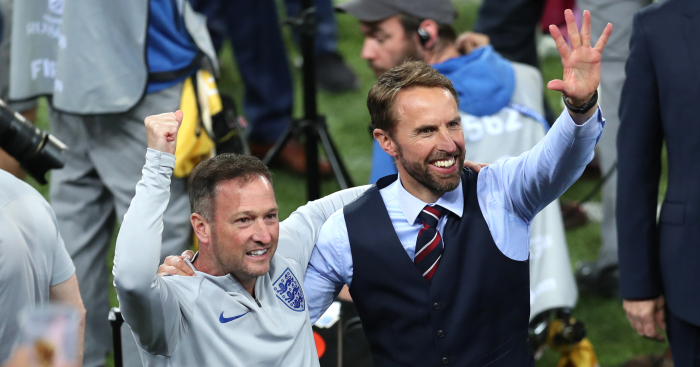 And now only eight remain. And one of them is England. Glory be…

Even the most negative of souls will be hard pressed to come up with a convincing argument that this isn’t one of the greatest World Cups in living memory.

It’s had something for everyone. From the black comedy of Germany’s elimination to Neymar’s outlandish six-turn roll against Serbia. The antics of FIFA ‘Goodwill Ambassador’ Diego Maradona to England finally, finally getting it done in a World Cup penalty shootout.

We’ve had goals, drama, intrigue and matches played in bright sunshine in fantastic stadia. F**king hell we’ve even had a few smiles from Roy Keane. Put simply, if you are a football lover this is as close to utopia as it gets.

And so to the quarter-finals. The business end of proceedings. What a time to be alive.

England have now got some serious momentum. The moaners in press row who didn’t agree with Gareth Southgate shuffling his pack for the Belgium game have been well and truly silenced. Silenced because England are now odds on to reach the World Cup semi-finals.

Southgate has played a blinder so far and this doesn’t feel like a side who are ready to go home just yet. He clearly trusts his players to perform and the system – which at times looks like a 3-3-2-2 formation – is clearly working. I suppose it doesn’t harm to have the world’s most in-form striker swaggering around up front either.

Sweden won’t be a pushover of course. Defensively excellent, they’ve only conceded against Germany in any of their last six matches. They’ll be physical and tough to beat but are pretty unremarkable as an attacking force as a result England will surely fancy the job.

Expect bare scenes up and down the land if England smash the Swedes. A World Cup quarter-final kicking off at 3pm amid a heatwave back in good old Blighty? My liver is already wincing at the very prospect. Let’s have it right, this is a game England can win. OK the Three Lions failed spectacularly at the Euros but the big difference between now and then is Southgate. Big up Gareth, with your gentlemanly conduct, fancy tactics and even fancier waistcoat.

Elsewhere Brazil v Belgium on Friday looks as though it’s going to be a stone cold classic. The Samba Boys have yet to truly hit their stride yet are into a seventh consecutive World Cup quarter-final. The Kazan Arena should be rocking as two sides who like to play the game the right way get down and dirty.

Belgium showed just what they are about as they recovered from being 2-0 down to oust Japan with what was essentially the last kick of the game.

The last time these two met was the 2002 World Cup when goals from Ronaldo and Rivaldo settled a last 16 tie. However Belgium have legitimate goal threats all over the park and will fancy this.

It’s been steady yet largely unspectacular stuff from Brazil to this point. Gabriel Jesus’s starting spot could be in doubt after another stirringly positive impact from Roberto Firmino off the bench against Mexico. Much will again depend on the boy Neymar and if he fancies this then Brazil have major claims. You can get better than 11/10 about a Brazil win but I’d be wary of steaming in given how talented this Belgium side is. The bet here is backing Over 2.5 goals as I feel this is a match that will buck the trend of low scoring World Cup quarter-finals and produce a hatful.

Try as I might I just can’t separate France and Uruguay. Much will depend on the fitness of Edinson Cavani but if he plays I just don’t see how La Celeste can be chalked up at almost 4/1 for the win.

Uruguay have shipped just a solitary goal all tournament and in Diego Godin possess a player who is just about the best defender around these days. Interestingly Godin is godfather to Antoinne Griezmann’s daughter. Their friendship will have to be put on hold on Friday as they come face to face for a place in the semi-finals, but I make Uruguay live underdogs here.

Finally I like Croatia at odds against to finally end Russia’s hopes and book a berth in the last four. It’s hard to see Russia abandoning the defensive approach they adopted for the Spain game. Sitting very deep and hoping opponents become exhausted trying to break them down reminds me of the tactics employed by Homer in that episode of The Simpsons when Moe Szyslak persuaded him to become a professional boxer purely due to his ability to absorb punishment.

Croatia should have too much for them with brilliant winger Ante Rebic working feverishly down the flank and little genius Luka Modric tasked with unpicking Russia’s defensive lock from midfield. Croatia are no joke. They have lost just three of their last 22 competitive games, and were arguably the most impressive side in the group phase. 6/5 about them winning at the Fisht Stadium looks a belter of a price, though punters might have to be patient with six of Croatia’s eight goals at this year’s World Cup having been scored in the second half.