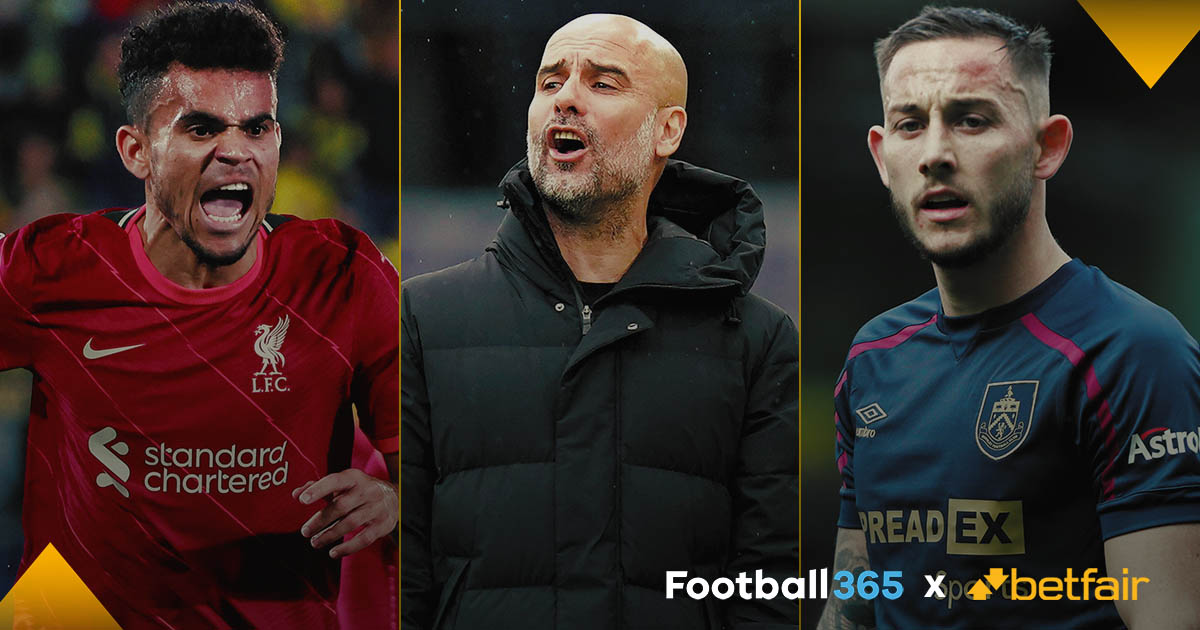 Cheeky Punt brings you his Premier League tips and he is expecting Liverpool and Manchester City to continue where they left off, with odds from Betfair throughout.

Brentford v Southampton
The Saints have lost seven of their last 10 as their Premier League season meanders to an ignominious conclusion. Brentford in contrast were brilliant in the month of April, beating Chelsea, West Ham and Watford and holding Spurs to a draw.

Both teams have taken 40 points from 35 games but preference is for the Bees here, who can get back on the horse after that paddling against Manchester United last time out.

Burnley v Aston Villa
Burnley look a cracking punt at 2/1 this weekend, surely? Leeds United are now the betting faves to fill that third relegation slot and it’s quite amazing that the Yorkshire giants have been dragged back into the shit after looking virtually safe just a few weeks back.

Fair play to Burnley, who’ve taken 10 points from their last four matches and look a different side since parting ways with Sean Dyche. Villa have kept back-to-back clean sheets so it won’t be a cakewalk but Burnley look a solid shout to continue their remarkable revival.

Betting: Burnley to win at 2/1 (Betfair)

Chelsea v Wolves
Chelsea‘s recent form has been iffy, but Wolves have lost seven of their last 10 (and lost their last three without troubling the scorers).

Wolves were absolutely dismal against Brighton and if the Blues don’t cruise to victory at Stamford Bridge I genuinely might have a sabbatical, f**k off to Argentina and learn to play polo.

Crystal Palace v Watford
Having lost five on the spin Watford must beat Crystal Palace to avoid relegation on Saturday. They are on the brink and Roy Hodgson hinted at retirement as he received his CBE on Wednesday. They are right behind the 8-ball and the Eagles, who have kept a clean sheet in each of their last three home league matches, should be far too good.

Betting: Crystal Palace to win to nil at 7/4 (Betfair)

The Seagulls are no mugs and this is illustrated by the fact they’ve taken 10 points from their last five matches. Manchester United’s second-place finish last season was built on rock solid away form, but the Red Devils have lost their last four on their Premier League travels and are heading for their lowest-ever Premier League points tally.

Betting: Brighton to win at 9/5 (Betfair)

Liverpool v Tottenham
Tottenham haven’t won at Anfield in 11 years but this looks a real test for Liverpool, who are still thinking in quadruples. P*ss poor for 45 minutes against Villarreal, Jurgen Klopp’s men then turned on the afterburners to nail down another Champions League final appearance.

Tottenham have conceded just four goals in their last seven matches under Mr Conte, who won’t fear a trip to Merseyside. And for good reason. Spurs striker Harry Kane has been involved in nine goals in 13 Premier League appearances against Liverpool (seven goals, two assists) and the Reds will be wary of the England man. They’ve beaten Man City twice this season so Liverpool will certainly have to be on it and they maybe look a bit short at 2/5 following that dramatic trip to Spain. However it’s impossible to bet against them and their folkloric manager at the minute, so let’s not try.

Arsenal v Leeds United
Leeds are just 5/4 shots now to be relegated. They travel to Arsenal on Sunday, host Chelsea in midweek and then finish off their campaign with games against Brighton and Brentford. Leeds actually went five games unbeaten before last weekend’s 4-0 mauling against Man City, but then no true Leeds fan probably ever thought they were safe from relegation.

They probably couldn’t be getting Arsenal at a worse time, either. Three straight wins now means they are in pole again to finish fourth. The Gunners won 4-1 at Elland Road earlier in the season, and could be out of sight by half-time on Sunday.

Leicester City v Everton
Everton’s away form is mince, and but for some stoic heroics at Goodison their season would have gone down the sh**ter a while ago. Leicester’s recent form has been iffy, but the Foxes have won eight of their last nine matches against sides starting the day in the bottom three. 7/5 looks a great price on the home win. Everton have the eighth highest wage bill in the Premier League, and are third bottom. Can you please imagine that wage bill in the Championship?

Betting: Leicester to win at 7/5 (Betfair)

Norwich City v West Ham
The Canaries’ relegation was confirmed with four games left to play. If West Ham are knocked out of the Europa League by Eintracht Frankfurt there could be a strange vibe to this. The Hammers have not won any of their last four league fixtures. 3-3 anyone?

Manchester City v Newcastle United
Pep Guardiola felt his Manchester City side didn’t do enough to reach the Champions League final. Hmmm. It is worth making absolutely clear to everyone that Real Madrid did not have a shot on target for 90 minutes. And then scored twice in injury-time. And a third at the start of extra-time. Madness. The Citizens have to pick themselves up and the only way they can do that is by beating the Geordies here.

To be fair Newcastle were second best all over the park last week against Liverpool, losing the shot count 24-4. It could be a similar story here if there is no Champions League hangover. Pep’s side have the best defensive record in the division and have won four of their last five against the Toon without conceding.

Betting: Manchester City to win to nil at 10/11 (Betfair)