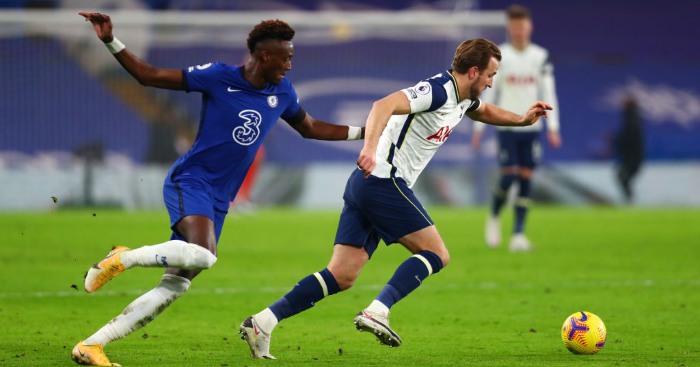 Jose Mourinho and Frank Lampard settle for a point apiece at Stamford Bridge as neither Chelsea nor Tottenham could find a winning goal.

Jose Mourinho’s men created no genuine chances but the wily Portuguese boss will hardly care about any lack of excitement on a relatively profitable Stamford Bridge return.

Try as they might however, the Blues could not convert what chances they were able to create.

Hakim Ziyech was left with the most to rue, having blazed over from the penalty spot with time to pick his finish after Ben Chilwell’s inviting cross.

Timo Werner had the ball in the net just 11 minutes in, only for the offside flag to deny the deadly Chelsea striker.

And so Chelsea missed their own chance to top the table, having to settle instead for extending their unbeaten streak to 14 matches in all competitions.

The points are shared at full-time. #CHETOT pic.twitter.com/nrtM9qgFCE

Werner conjured a sumptuous finish early on as Chelsea opened up Spurs on the break, only for the offside flag to thwart the Germany hitman.

The battling Tammy Abraham pilfered the ball on halfway and Mount set Werner free on the inside left.

Two touches and Werner had the ball in the net, but his effort was quickly chalked off.

Edouard Mendy palmed away well from a low Serge Aurier drive as Spurs found their feet.

But genuine chances proved few and far between in an ultra-cagey first half.

And so Spurs would have been the happier to turn around with the game goalless.

Chelsea’s tempo and rhythm improved after the break, with Reece James to the fore and Ziyech increasingly influential.

Twice the Blues worked James free for first-time crosses, but on neither occasion could Abraham reach the teasing centres.

Abraham also failed to reach a smart cross from Werner, as Chelsea ground on in search of cracking Spurs’ defensive regimen.

Ziyech spurned perhaps the best chance of the half when blasting over after receiving Chilwell’s low cross.

Chilwell raced forward to pinch the ball and showed impressive presence of mind to cut low into the middle for the lurking Ziyech.

The Morocco winger set himself nicely with his first touch, but then undid all that good work by firing into the stands.

A visibly frustrated Mount unleashed plenty of pent-up aggression on a rasping drive, only to see Hugo Lloris tip his 18-yard effort around the post.

Chelsea threw the fit-again Christian Pulisic, Kai Havertz and the in-form Olivier Giroud off the bench in a final attempt to break the stalemate.