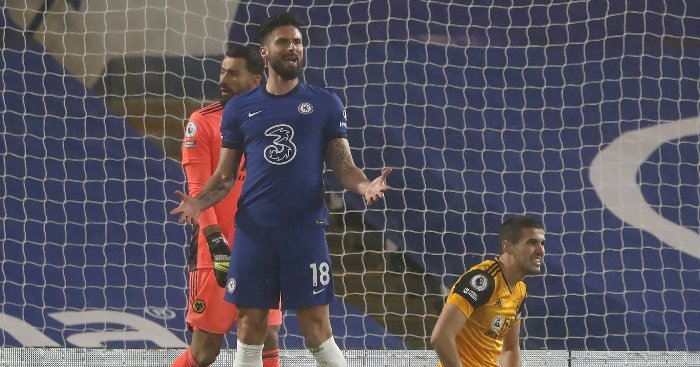 Chelsea drop points in Thomas Tuchel’s first game in charge as they are left frustrated by Wolves at Stamford Bridge.

Former Paris St Germain boss Tuchel replaced Frank Lampard on Tuesday, with the Blues board hailing the 47-year-old as one of Europe’s top coaches.

Chelsea struggled for fluency in a tepid first half as many of the issues that beset ex-boss Lampard surfaced again at Stamford Bridge though.

And despite dominating possession and territory throughout, Chelsea were forced to settle for a draw – which extends their paltry league return to just two wins in nine matches.

Tuchel’s first line-up turned back Chelsea’s clock in one sense – but kept it stock-still in another.

The German boss pinched Antonio Conte’s 3-4-2-1 Chelsea formation, even asking one of his wingers to deputise as a wing-back.

If that was the retro element to Tuchel’s first tactical deployment, where things stood still revolved around the midfield.

The deep midfielders Jorginho and Mateo Kovacic formed a central box when linking with the two numbers 10s in Kai Havertz and Hakim Ziyech.

But just as with all the struggles under Lampard, Chelsea could not move the ball with enough incision or impetus to open up the visitors.

Chelsea’s one fluent move of a testing first half came almost immediately, with Hudson-Odoi underlapping and providing a fine cross for Giroud.

The France hitman could not make contact however, and required no telling he should have tapped home.

The again out-of-sorts Havertz failed to move when he should have raced beyond Giroud, allowing another opportunity to evaporate.

Giroud stepped over Ziyech’s cute ball, expecting Havertz to sneak in behind.

But when the Frenchman turned around, Havertz was still in the wider channel.

Ruben Neves fired over from a free-kick after Antonio Rudiger had felled Podence following his own failed clearing header.

Rudiger hit the target with a header from Ziyech’s free-kick, but Rui Patricio mopped up without issue.

Chelsea at least upped the ante after the break, with Giroud unable to conjure anything from two half-chances.

Ben Chilwell blazed over from a good position after a neat cutback from Havertz, and then Giroud scuffed a shot after good work from Hudson-Odoi and Ziyech.

Chelsea so nearly paid for squandering so much territory and possession when Pedro Neto scrambled into the Blues’ box.

But the crossbar came to Edouard Mendy’s rescue, as Neto’s deftly lofted effort bounced off the top of woodwork and over.

Tuchel withdrew Chilwell and Giroud and sent in Pulisic and Abraham as Chelsea went in search of a winner.

Pulisic’s deployment at right wing-back saw Hudson-Odoi shift flanks, in another indication that this will be Tuchel’s favoured formation.

Kovacic whipped a shot close from 20 yards after nice work from Pulisic, before Tuchel brought on Mason Mount for Ziyech.

Patricio tipped Hudson-Odoi’s deflected shot round the post as Chelsea still could not find the breakthrough.

Mount added energy and incision at the death, but still there was to be no winner.

Havertz saw a threatening header deflected wide from a corner, and that was that.