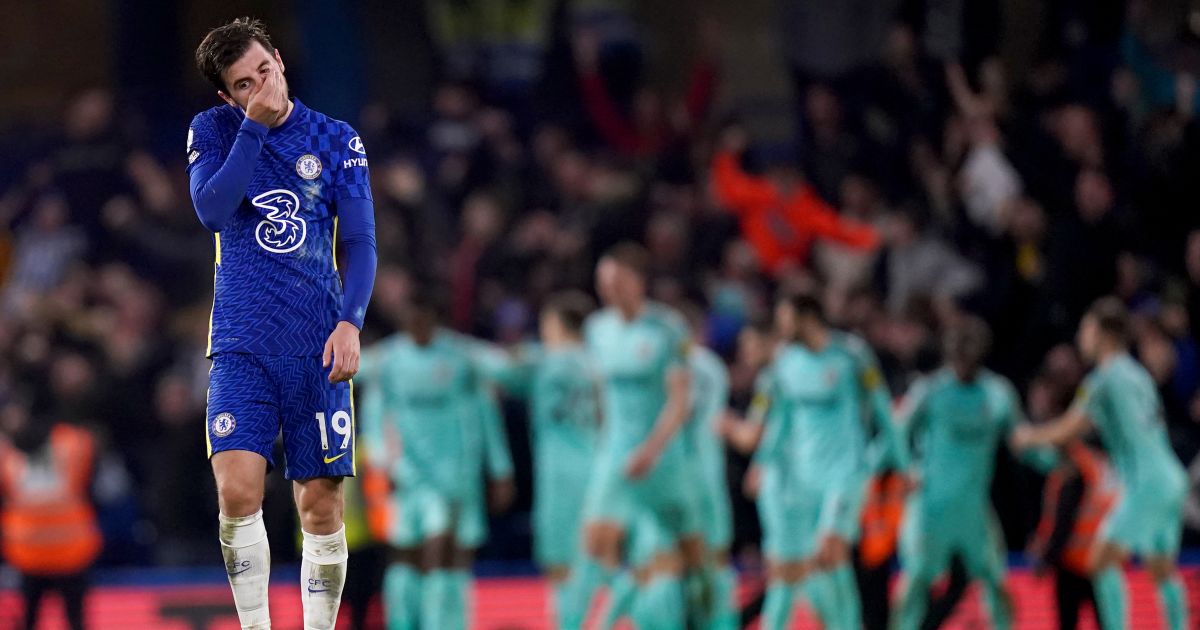 Romelu Lukaku’s second goal in as many games still pushed Chelsea above Liverpool into second place in the table, but the Blues failed to survive a marauding Brighton’s second-half onslaught.

Welbeck punished a shattered Chelsea at the death, leaving the Blues one point ahead of third-placed Liverpool but with the Reds boasting a game in hand, while a hamstring injury for Reece James adding to the bad news for Thomas Tuchel..

Just a day after left wing-back Ben Chilwell was ruled out for the rest of the season due to knee ligament surgery, right wing-back James suffered a leg concern of his own.

Chelsea were already assessing their options ahead of the January transfer window with a view to a possible recruit to offset Chilwell’s injury.

And now the Blues will be made to sweat on the result of tests on James to determine the extent of the latest setback to the Stamford Bridge squad.

Chelsea will host title rivals Liverpool at Stamford Bridge on Sunday with a possible defensive conundrum on their hands should James’ injury prove serious.

Cesar Azpilicueta would likely have to shift from central defence to right wing-back, with Marcos Alonso’s heavy workload on the left continuing in Chilwell’s absence.

Andreas Christensen hobbled out of the Seagulls clash at half-time exacerbate Chelsea’s defensive injury issues, with Thiago Silva already missing due to a thigh complaint.

Christian Pulisic hobbled through visible pain in the frenetic closing stages too, with the USA forward’s name doubtless added to the catalogue of injury issues.

What started as a calculated experiment with James at left wing-back and Pulisic on the right quickly became yet another reshuffle.

Lukaku was in full bully mode by the time he powered home with a header from a corner.

The Belgium hitman left Neal Maupay for dead at the set-piece to thump the Blues in front, but the goal only assuaged the blow of James’ injury moments beforehand.

Alonso was pressed back into action off the bench when Tuchel ideally wanted to keep him fresh for Sunday’s big clash with Liverpool.

Chelsea’s personnel reshuffle, coupled with taking the lead, yielded a loss of focus that allowed Brighton back into the contest.

The Blues held out until half-time but wobbled again after the break when Jakub Moder’s flick brushed the crossbar.

Maupay charged down an Edouard Mendy clearance without any reward as Brighton continued to press, before Alexis Mac Allister and Yves Bissouma drew smart saves from Chelsea’s keeper.

Callum Hudson-Odoi spurned a glorious chance to relieve the pressure and kill the game, only to fail with a ball across the box when he should have fired on goal when clean through.

Toni Rudiger even had to block a goal-bound Maupay shot when Mendy had been left stranded by rushing out to thwart Mac Allister to the left of his area.

Azpilicueta toe-poked the ball off Maupay’s foot when the Frenchman was poised to pull the trigger at point-blank range, and then Adam Lallana blazed over despite time and space to pick a spot.

Just when Chelsea thought they would hold out however, Welbeck sneaked in to nod past Mendy and floor the stunned Blues.