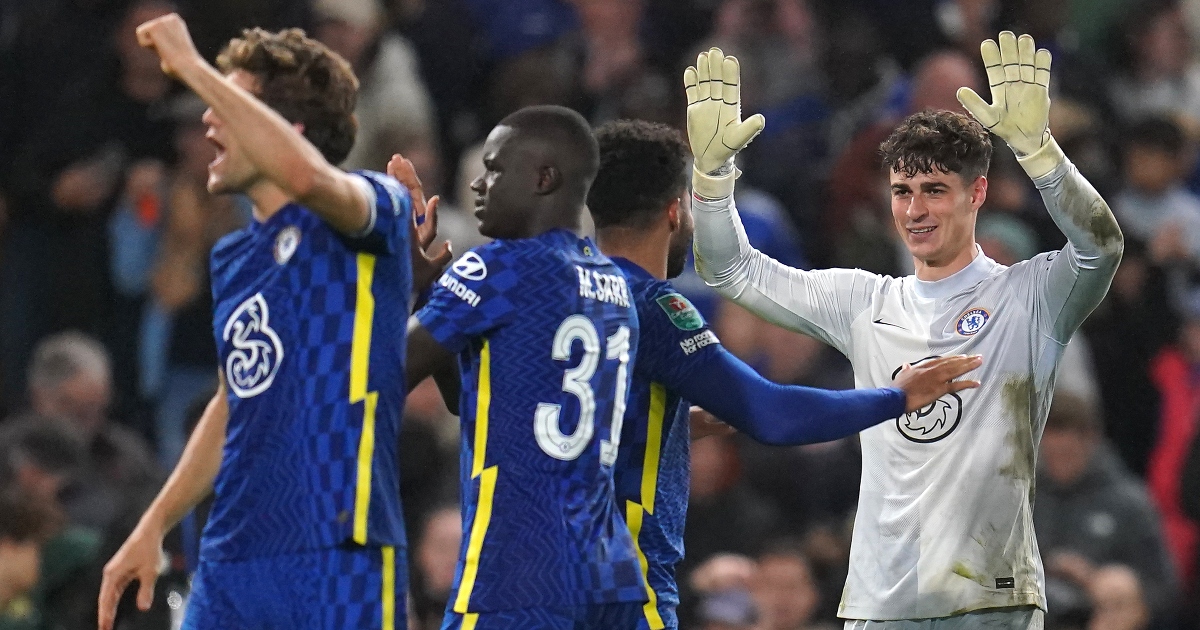 Chelsea edged past Southampton via a penalty shootout to advance to the quarter-finals of the Carabao Cup after a 1-1 draw in 90 minutes.

Reece James again provided the decisive kick like he had done in the previous round against Aston Villa after Theo Walcott and Will Smallbone had failed from 12 yards for the Saints.

Kai Havertz’s first-half goal had the hosts on course for another victory but Che Adams pegged Chelsea back before spot-kicks were required in west London.

Both managers made a plethora of changes but it was Blues boss Thomas Tuchel who made the fewest with only six from the thrashing of Norwich. Ross Barkley and Saul were among those handed a chance and they combined for the first opportunity in the sixth minute.

Barkley picked out Saul from a corner and only a stunning finger-tip save by the recalled Fraser Forster stopped the summer addition from opening his account for Chelsea.

Havertz had retained his spot from Saturday’s 7-0 win and after he missed out on a goal against the Canaries, the German was eager to make amends.

A first effort with his weaker right foot whistled past the post from 25 yards and his next in the 26th minute went even closer.

Havertz combined impressively with Barkley inside his own half before Marcos Alonso sent the forward away where he worked a yard of space and fired towards the top corner but Forster was able to parry wide for a corner.

It had been far from one-way traffic with Southampton, who matched up the hosts and went with wing-backs for the first time this term, causing problems and Adam Armstrong should have done better with a back post header following a corner by namesake Stuart Armstrong.

Off the pitch, Saints assistant Richard Kitzbichler had shown he was more than up for the fight after twice crossing words with Tuchel on the touchline with the pair tenacious during each exchange.

Another chance went the way of the visitors with 33 on the clock when Stuart Armstrong saw a shot blocked by Trevoh Chalobah after good work from Kyle Walker-Peters.

There was still time for one more opportunity before half-time and it proved decisive.

Barkley again caused problems with his delivery from a corner and this time Havertz was not to be denied, with the ex-Bayer Leverkusen ace able to guide his header into the bottom corner for his third goal of the campaign.

Southampton would not trail for long though with the equaliser coming two minutes after the break and Walker-Peters involved again.

The wing-back was played into the area and while his effort was blocked by the legs of Kepa Arrizabalaga, Adams was on hand to tap home and get off the mark this season.

It contributed towards a frantic start to the second period with Forster called into action on three occasions and equal to firstly Havertz and then Barkley and James while down the other end Adam Armstrong forced a fine save out of Chelsea’s second-choice goalkeeper.

With the Blues lacking control of the fourth-round tie, Tuchel turned to Ben Chilwell and Mason Mount but it was Saul who almost produced the second when he fired wide following Havertz’s cut-back before his curler forced Forster into another excellent stop.

Ralph Hasenhuttl also called for reinforcements and Smallbone nearly enjoyed a perfect return after nine months out following a ruptured anterior cruciate ligament but his header was saved by Kepa seconds after his 77th-minute entrance.

It saw the tie go to spot-kicks and although Forster produced a stunning save to thwart Mount, Walcott and Smallbone failed from 12 yards and it saw Chelsea go through to the last eight of the competition.