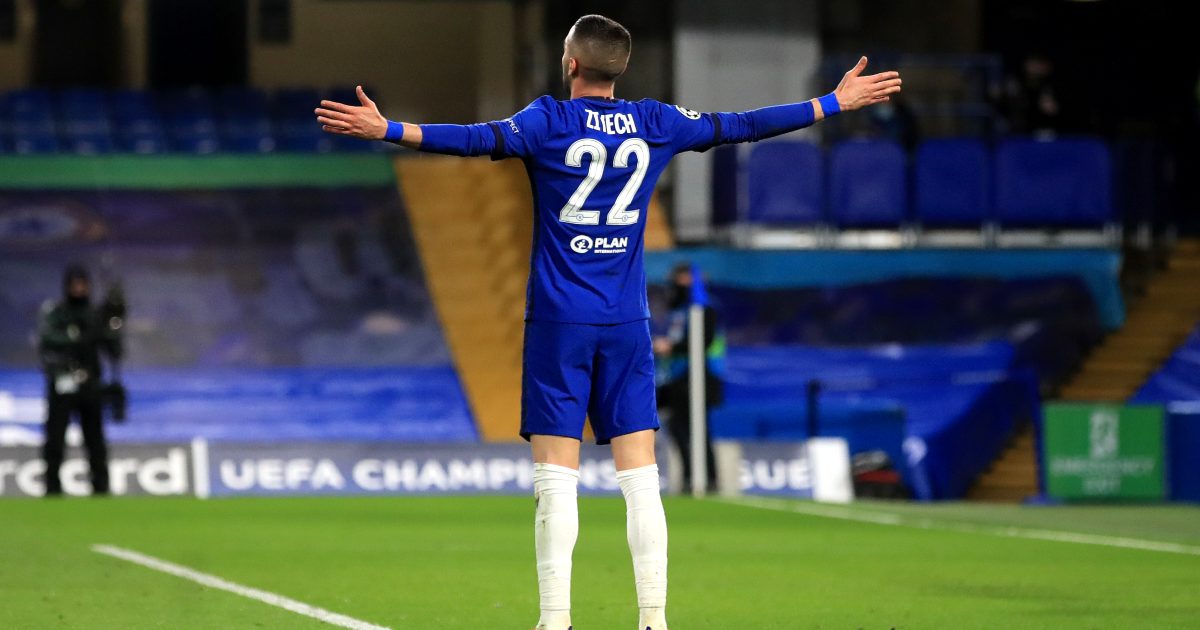 Hakim Ziyech and Emerson got on the scoresheet as Chelsea cruise through to the Champions League quarter-finals.

Timo Werner and Kai Havertz combined to create Ziyech’s goal of graft and guile as Chelsea sunk 10-man Atletico 2-0 in the last-16 second leg in west London, and 3-0 on aggregate.

Emerson Palmieri drilled home late on to gloss the score and seal a fine victory, after Diego Simeone’s Atletico had seen Stefan Savic sent off late on for elbowing Toni Rudiger.

Ziyech’s first goal in 20 Chelsea appearances proved enough to settle an absorbing contest, where N’Golo Kante and Rudiger excelled for the hosts.

Boss Thomas Tuchel has required just 51 days at the Stamford Bridge helm to qualify for the Champions League quarters – a feat that had last been achieved by the Blues in 2014.

Former Paris St Germain manager Tuchel has pulled off quite the extended Chelsea honeymoon period, trading the muddled for the resolute, and overseeing 13 matches without defeat.

The Blues’ last five Champions League campaigns petered out at the last-16 stage, but Tuchel’s blueprint and his man management has paid immediate dividend.

That alteration failed to suit either Lampard’s tactical approach, or Kante’s strengths.

No sooner had Tuchel arrived however, than Kante was restored to his game-breaking role at the base of midfield, that so underscored Premier League title triumphs for both Leicester and Chelsea.

And here, when Chelsea needed his magnetic midfield qualities most, Kante delivered a vintage display.

Chelsea’s 11th clean sheet in those 13 games under Tuchel provided the foundation for another landmark result, with the Blues coping manfully without the suspended Mason Mount and Jorginho, and injured duo Thiago Silva and Tammy Abraham.

Joao Felix ghosted briefly away from Kante and into the Chelsea box to open the night. But as the Portugal forward looked to pull the trigger, up popped Kante with a piece of trademark blindside pilfering, to lift the ball off his toe and quell the danger.

Werner worked himself free for a shot in the Atletico area, but his effort deflected wide off Ziyech’s foot, with the ex-Ajax player unable to jump clear.

Rudiger barged Luis Suarez just outside the Chelsea area but got away without censure.

And then captain Cesar Azpilicueta enjoyed the reprieve of the half, the defender lucky not to concede a penalty.

Azpilicueta’s under-hit backpass allowed Yannick Carrasco to sneak onto the ball and in on goal, and the Blues skipper promptly wrapped his arm and hand around the Atletico player’s torso.

The winger threw himself to the ground in theatrical style, but despite the extra accent there was still enough contact to interest plenty of referees.

Neither the man in the middle nor the Video Assistant Referee felt the need for a penalty however, and Chelsea were able to breathe a collective sigh of relief.

Chelsea quickly put that fortune to good use, Werner and Havertz combining well to tee up Ziyech’s goal.

Werner hustled wide to deflect Kieran Trippier’s cross into Havertz’s path, jumping to his feet to race down the inside left.

Havertz found Werner haring clear, and the former RB Leipzig forward kept his cool to roll a smart ball to the far post.

Ziyech had tiptoed into a fine position in the box and promptly swept the ball home to cap a stunning break.

Chelsea opened the second half brightly, and Ziyech drew a fine save from Jan Oblak with a curling 18-yard effort.

And then the visitors had Savic sent off for elbowing Rudiger, with the defender storming off in disgust at the decision.

When Chelsea raced clear at the death, Christian Pulisic fed Emerson and the full-back did the rest with a smart finish, to cap a big night for Tuchel and Chelsea.