Home All The News Chelsea 2-0 Everton: Tuchel’s side cruise to victory 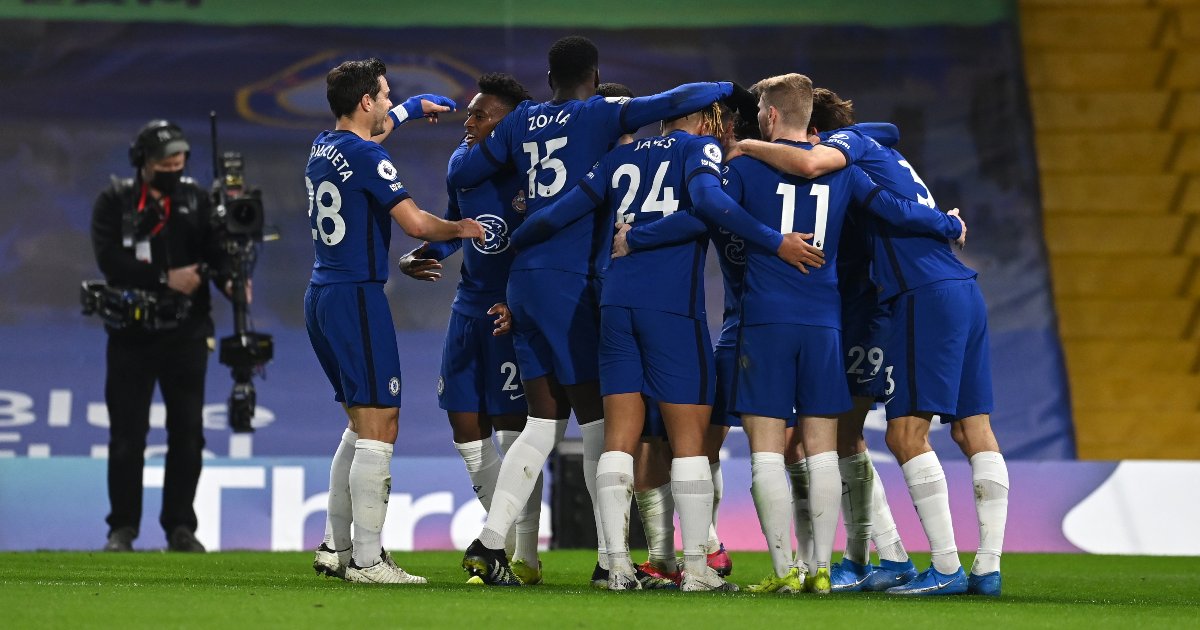 Goals in either half from Ben Godfrey (OG) and Jorginho (PEN) secure Chelsea a vital victory over their top four rivals Everton.

Kai Havertz starred in a false nine role at Stamford Bridge, with the Germany playmaker twice denied a goal before winning Chelsea’s penalty.

New boss Thomas Tuchel’s stunning start to life in west London extended to an 11th match without defeat and a ninth clean sheet.

READ MORE: Where Liverpool rank among the PL’s bad champions…

Where Chelsea were leaky and hesitant under Frank Lampard, Tuchel has quickly recalibrated the Blues into a mean defensive machine.

Chelsea have conceded just two goals on Tuchel’s watch, and their second win over a Merseyside opponent in five days tightened the Blues’ grip on fourth place in the league table.

After Thursday’s comprehensive 1-0 win over Liverpool at Anfield, here was another assured victory over a north-west rival.

Everton still boast a game in hand on Chelsea, but the Toffees now trail Tuchel’s men by four points.

Carlo Ancelotti pitched up at his old club Chelsea with Everton buoyant from three straight victories, but the visitors were outmatched on the night.

Havertz was desperately unlucky to have the opening goal taken away from him.

The Germany playmaker impressed throughout the first half in his false nine role, and certainly deserved a goal for his troubles.

But instead of his first Premier League strike in 15 top-flight appearances, Godfrey was credit with an own goal.

Havertz’s cute diversion of Marcos Alonso’s cross had certainly outfoxed Jordan Pickford and looked to be heading for the corner of the goal, before Godfrey’s intervention sent the ball crashing into the other side of the net.

Callum Hudson-Odoi deserved just as much credit as anyone else for the goal however, with the England winger thriving in his natural left-wing environment.

The 20-year-old jinked one way then the other, dropped off his marker Mason Holgate and collected a pass from Kurt Zouma – and that was just for starters.

Spinning on his heel to face the goal, Hudson-Odoi then threaded the perfect through-ball for the onrushing Alonso.

The Spain left-back’s cross set the goal in motion, but Hudson-Odoi’s stunning movement and precision passing had unlocked an otherwise tight Everton defence.

Alonso should have doubled Chelsea’s lead before half-time, having raced clear in latching onto Mateo Kovacic’s fine ball over the top of the Everton defence.

The 30-year-old’s shot took a slight deflection which reduced the power, and allowed Pickford to palm the ball just around his far post.

Chelsea boss Tuchel spent much of the half screaming at Reece James to tuck in off the right flank when the play was on the left wing. Tuchel was determined to see James attack with more aggression on the ball, and eventually called James and Havertz over to detail his instructions on a notepad.

Despite the manager’s frustrations however, Chelsea were good value for their half-time lead.

Havertz had the ball in the net again, shortly after the interval. The lively forward was also denied a goal here however, as a neat finish was chalked off for handball.

Chelsea did not have to wait long for their second goal though, and Havertz was involved once more.

The former Bayer Leverkusen star latched onto Kovacic’s raking through-ball in the Everton penalty area, and was felled by Toffees stopper Pickford.

Jorginho stepped up to the penalty spot and delivered his trademark skip-step finish, sending the frustrated Pickford the wrong way.