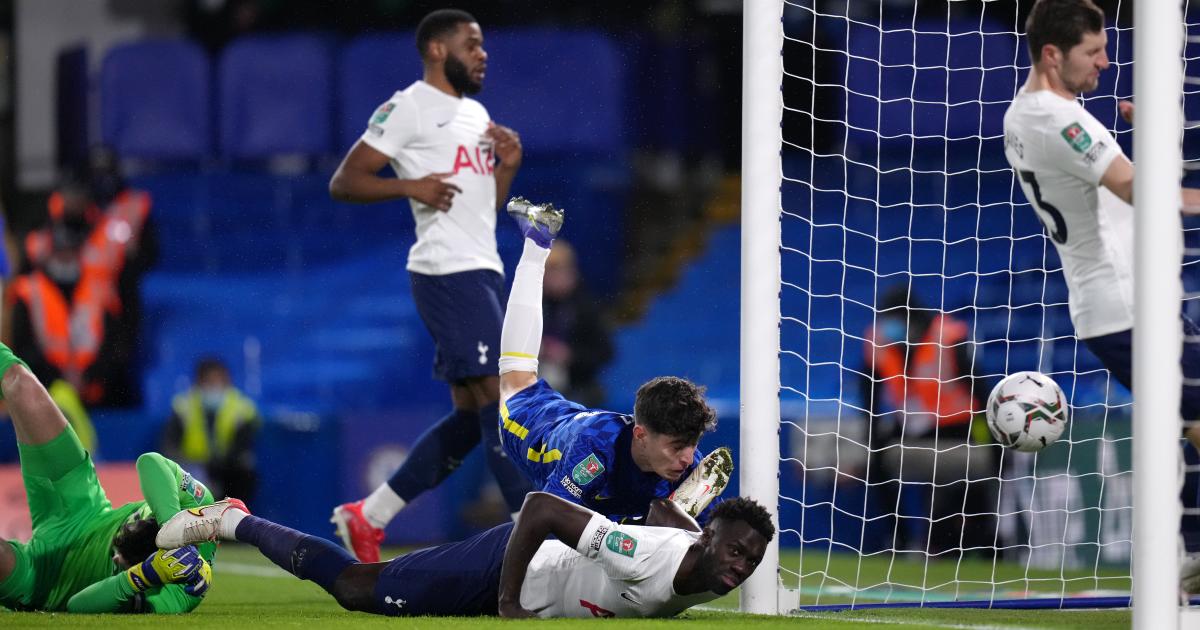 Tottenham giftwrapped a 2-0 win for Chelsea in the first leg of their Carabao Cup semi-final with a couple of disastrous defensive errors in the first half at Stamford Bridge.

Remarkably, things would get worse still for the visitors in an error-strewn first half as Davinson Sanchez conceded a needless free-kick wide on the right. When the ball was played into the box, Tanganga headed it against Ben Davies and into the net.

It was an unhappy return to Chelsea for Spurs boss Antonio Conte, who was at least able to staunch the bleeding after half-time to give Spurs half a chance of turning things round in next week’s second leg at the Tottenham Hotspur Stadium.

Romelu Lukaku, meanwhile, had a quiet evening – despite the visitors’ generosity –  on his return from the naughty step. Such was Chelsea’s superiority and Tottenham’s malaise however that the Blues could comfortably cope with a quiet night from their £98million talisman.

The Blues drew first blood in a trio of January clashes between the fierce London rivals, with an absentee-induced 4-3-3 formation paying big dividend for boss Thomas Tuchel.

Havertz cut a battered and bruised figure on his half-time withdrawal due to a head knock and a suspected broken finger, with the Blues hoping the forward will not be sidelined for long.

Positive Covid-19 tests for Thiago Silva and N’Golo Kante were of more concern on the night, but Chelsea adjusted well for a fully merited victory.

Chelsea raced into the lead, hassling Spurs with precision pressing.

The goalmouth melee around the opening goal left Havertz with a suspected broken finger, but after touchline treatment the former Bayer Leverkusen player was back in action.

Havertz should have doubled both his and Chelsea’s tally when a deflected clearance fell straight into his path, but a scuffed first-time shot allowed Hugo Lloris a routine stop.

Toni Rudiger’s far-post shot was deflected wide from a corner as Chelsea’s dominance continued, and then a major defensive bungle gifted the Blues their second goal.

Japhet Tanganga’s headed clearance ricocheted off the nonplussed Davies’ shoulder – and straight past the statuesque Lloris.

Lukaku should have made it three before the break, but the striker could only nod wide from Hakim Ziyech’s teasing cross.

Spurs were improved after the interval, and Harry Kane’s drilled free-kick forced a solid stop from Kepa Arrizabalaga.

Chelsea’s riposte was a hooked shot from Lukaku, but the first-time effort lacked venom.

Ziyech should have buried a golden chance when worked free by Werner’s neat link play with Lukaku.

But the Morocco winger failed to generate any power on his left-footed shot that gifted Lloris an easy save.

Werner had everybody beaten – including Lloris – with a curling shot cutting in from the left, only for the ball to whip wide of the post.

Ziyech conjured the pass of the night to send Werner clear through the middle, but Lloris extended a palm to his attempted chip to thwart the German.

Ziyech volleyed over from another glorious chance, and Chelsea rode out one late scramble in their own penalty box to secure a solid victory.