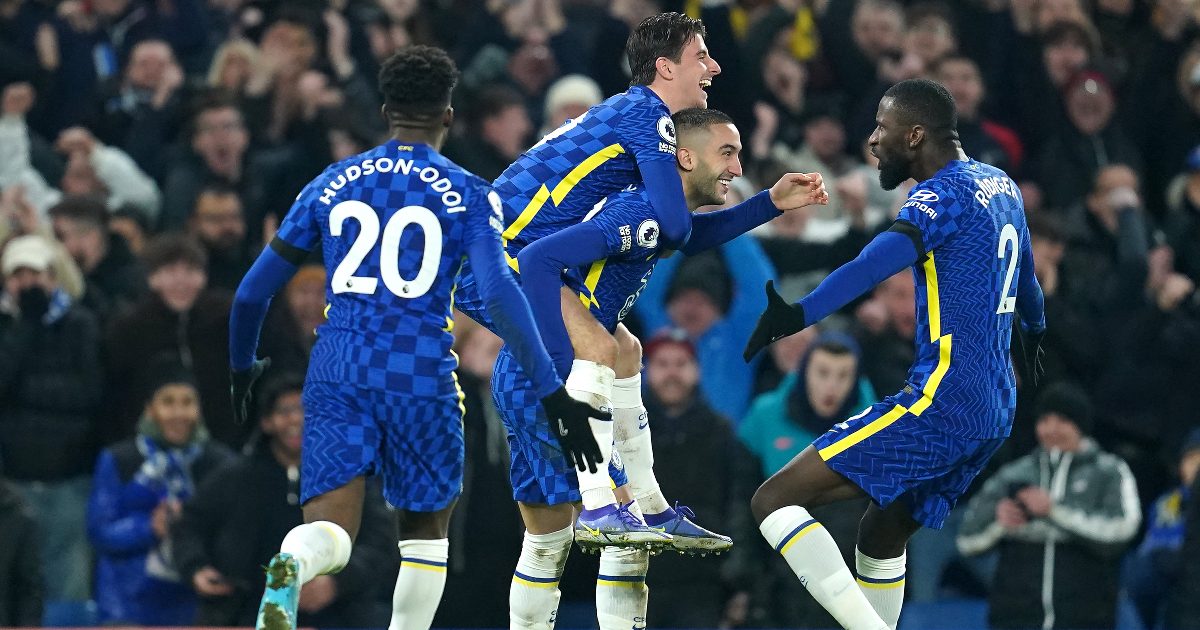 Hakim Ziyech scored a stunning goal as Chelsea got the better of Antonio Conte’s Tottenham Hotspur at Stamford Bridge.

The defender earlier did enough to earn himself a foul to deny Harry Kane a goal in the first half.

Kane tapped past Kepa Arrizabalaga after a light tussle with Silva in the Chelsea box, only to be penalised for a foul on Silva, leaving the game scoreless at half-time.

Ziyech’s masterful curling effort transformed the mood at Stamford Bridge, however, for both himself and all of Chelsea.

The 28-year-old refused to celebrate his blistering goal at Brighton on Tuesday, but five days later his moment of sheer magic had him pointing to the skies in jubilation.

If Ziyech needed the personal boost, how Chelsea required this result. The Blues’ five draws since December and then defeat at Manchester City had left Thomas Tuchel’s men in a precarious Premier League position.

Tottenham pitched up in west London with four games in hand over their fierce foes, knowing that a maximum return would see them leapfrog the Blues and move into the top four.

Chelsea’s first league win in five – and since Boxing Day – eased a huge amount of pressure, though, as the hosts finally found their fluency in a pulsating second half.

The gas is on, bringing the heat! 👨‍🍳

Spurs finished the day in seventh spot, trailing the third-placed Blues by 11 points, with a possible 12 in hand. The manner of the defeat, however, and the overall momentum swing, will leave Chelsea by far the more confident of a top-four finish.

Ziyech’s wonder strike would have been worthy of winning any contest, though, and Callum Hudson-Odoi must also earn big plaudits for his assist.

The England forward rolled Japhet Tanganga to jink clear before feeding Ziyech on the edge of the area.

What followed turned a game that until the break at least had hung right in the balance.

Romelu Lukaku spurned a fine chance for Chelsea just minutes into the contest.

The Belgium striker leaned back on Mount’s low centre and skied the ball into the stands.

Ziyech’s cute far-post cross then had Hudson-Odoi creeping round the back of the defence only to nod wide.

The Moroccan did hit the target from 20 yards, but Hugo Lloris coped easily with an effort lacking true venom.

Matt Doherty was rightly not censured after Malang Sarr’s heavy fall under a challenge.

Chelsea’s measured build-up play could not be matched in the final third, as Jorginho’s loose pass meant for Lukaku saw a promising move break down.

Lukaku wasted another glorious opening from another low Mount cross, with Hudson-Odoi unable to make anything happen after latching on to the loose ball at the far post.

Kane thought he had stolen Tottenham the lead at the death of the first half, only for his effort to be chalked off almost as soon as the ball crossed the whitewash.

The England captain was pulled back for his push on Silva, with the Brazil defender using all his wiles to earn the foul and deny Spurs the goal.

Chelsea returned from the half-time break a team refreshed and revitalised.

And Ziyech’s wonderful goal only added to that rejuvenation as the Morocco forward left Lloris no chance by fizzing the ball right into the top corner.

Silva put the seal on Mount’s wicked free-kick to wrap up a result to fire up the Blues and stall the Spurs.