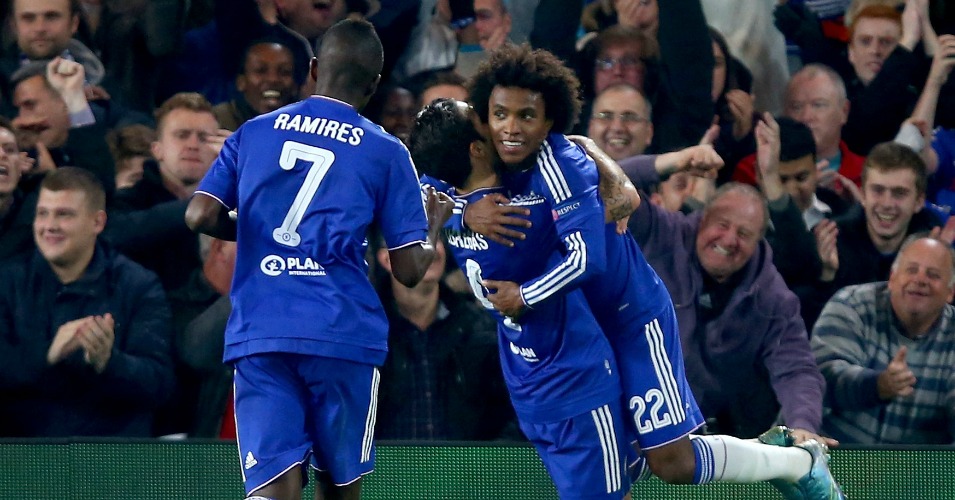 Chelsea beat Dynamo Kiev 2-1 thanks to a late winner from Willian at Stamford Bridge, keeping Champions League qualification in their own hands and easing a modicum of the pressure on Jose Mourinho.

The adulation poured down from the stands on the self-proclaimed Special One, whose position appears perilous, and his Chelsea side eked out an unconvincing victory to ease the pressure a little.

Aleksandar Dragovic turned Willian’s cross into his own net to give Chelsea an opener which had more than an element of good fortune and scored at the other end as Asmir Begovic’s luck deserted him.

But a delightful Willian free-kick settled the contest in Chelsea’s favour, giving the Blues a second win in six games and boosted their Champions League hopes ahead of ties with Maccabi Tel-Aviv and Porto, Mourinho’s former club.

As often is the case with Chelsea and Mourinho, it was not straightforward and there was a moment of controversy.

Diego Costa was denied a penalty when trying to charge between two defenders in first-half stoppage time and replays showed only the slightest contact, justifying referee Pavel Kralovec’s decision.

Mourinho, who has had numerous run-ins with officials this season and is subject of a stadium ban for Saturday’s Premier League clash at Stoke, was smiling and quietly seething. But had Costa stayed on his feet he could have scored.

Chants of ‘Jose Mourinho’ erupted in the moments prior to kick-off and continued throughout as the home faithful showed their support.

So did his family. Mourinho’s son is a regular at matches, but Mourinho’s wife and daughter were also present, sitting behind the home dugout, which the 52-year-old Portuguese may have been occupying for the final time had things not gone his way.

Mourinho was subject of the first managerial vote of confidence of Roman Abramovich’s 12-year ownership on October 5 and has been defiant over talk of his future. He acknowledged the praise each and every time.

His popularity is not in doubt. Results are what matter and Liverpool last Saturday inflicted a sixth Premier League loss in 11 games and ninth in 17 games in all competitions.

The Blues, with Eden Hazard dropped to the bench as one of three changes, started well once more and Oscar steered a Cesar Azpilicueta cross straight at Dynamo goalkeeper Olexandr Shovkovskiy.

Costa blasted over before Chelsea went ahead after Begovic’s unconvincing clearance found Baba Rahman, in at left-back.

His cross-field pass found Willian, whose cross was turned in at the near post by Dragovic.

Costa next looked for a penalty instead after squeezing through between Dragovic and Yevhen Khacheridi.

Kurt Zouma’s fine tackle denied Artem Kravets as the Dynamo forward raced through on goal early in the second half.

Chelsea survived a penalty appeal against them when Derlis Gonzalez felt his shot had been handled by Ramires.

The visiting supporters threw a plastic bottle on to the pitch in protest.

Dynamo continued to press, with substitute Junior Moraes seeing his shot repelled by Begovic, and Zouma fluffed a chance to double a fragile lead.

Domagoj Vida then headed wide and John Terry and Begovic next contrived to concede a corner from which the goalkeeper failed to reach the ball and Dragovic fired in.

But Willian, one of few players to be absolved of blame amid a miserable run, added a stunning set-piece strike to save the day.