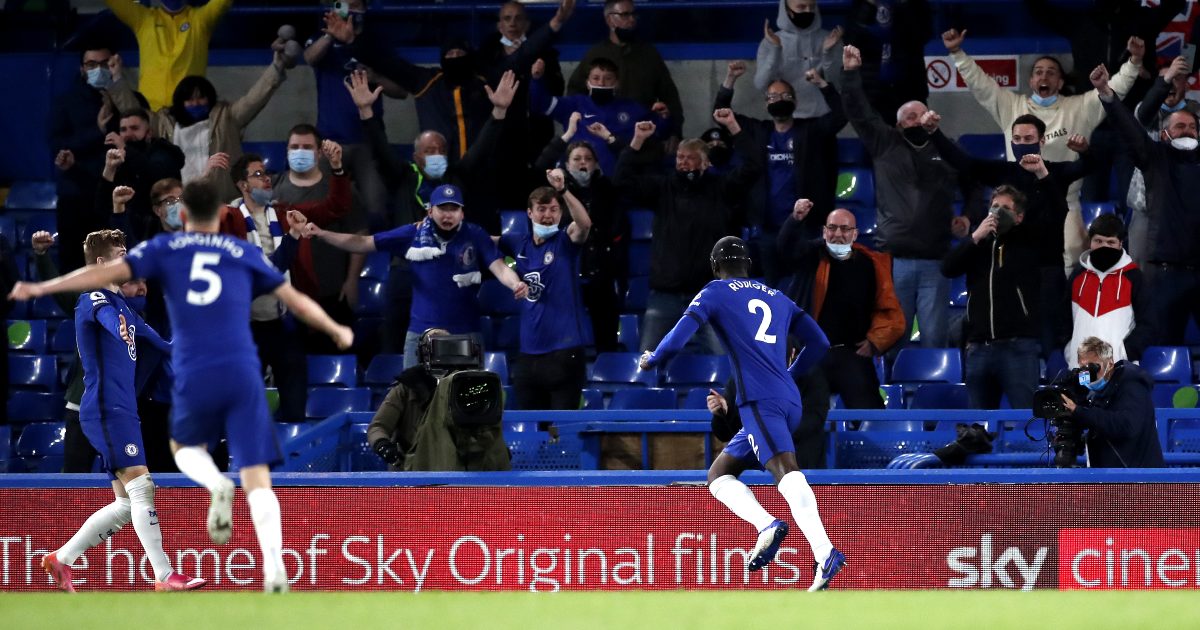 Jorginho calmly slotted a spot-kick to seal the Blues’ vital victory, with the only worry being an early enforced exit for key midfielder N’Golo Kante.

Kelechi Iheanacho sidefooted in for Leicester to set up a nervy finish, but Ayoze Perez missed a golden chance as Chelsea held out for a result of major significance.

The Blues avenged Saturday’s 1-0 FA Cup final defeat by Leicester with a pulsating showing in west London, to leapfrog the Foxes into third place in the Premier League table. Beat Aston Villa on the road on Sunday and the Blues will book the all-important Champions League qualification for next season.

Thomas Tuchel branded the resurgent Rudiger an “aggressive leader” on Monday, and the very next day the 28-year-old encapsulated that praise with another pivotal performance.

Rudiger found the net for the first time since his brace snagged a 2-2 draw at Leicester on February 21, 2020.

The powerful German has been playing in a protective mask after breaking his jaw, amid a hugely impressive second half of the campaign.

And this towering performance might just be enough to seal the Blues that Champions League place for next term, whatever happens in the showpiece finale of this season’s competition against Manchester City in Porto on May 29.

Rudiger almost left Chelsea in September after falling out of favour with ex-boss Frank Lampard but ever since fellow German Tuchel’s arrival, the former Stuttgart and Roma centre-back has been entirely revitalised.

His scrambled goal lifted all the pressure that had grown and grown with every missed chance – and those two disallowed goals for Werner.

Pulisic could not turn in Chilwell’s cross from close range but for the hosts, the frustrations were only just beginning.

Kasper Schmeichel saved well from Kante, Pulisic and then twice denied Mount in a virtuoso show of goalkeeping.

Pulisic should have fed Werner in the middle but rejected the cross and wasted another big opening, then Werner saw a smart low finish ruled out for offside.

Thiago Silva headed over from Chilwell’s corner before Kante trudged out of the clash in a worryingly early exit. The fit-again Mateo Kovacic quickly caught the pace of the game in a promising return to action as his replacement.

Werner bundled the ball over the line from point-blank range, with goalline technology awarding the goal.

But after Werner had raced to the corner, slid on his knees and celebrated with the returning Chelsea fans, VAR reared its head. The almost inevitable review saw the goal disallowed for handball and Chelsea denied again.

Chelsea’s fans made their feelings crystal clear, chanting “it’s not football any more”, and plenty more laced with industrial language.

Mount drove a half-volley over the bar before absolutely skinning Caglar Soyuncu and cutting back well for Pulisic. But again the USA forward could only turn the ball the wrong side of the post.

After all the wasted chances of the first half, Chelsea were ahead in a flash after the interval. Luke Thomas first conceded a cheap corner, then unwittingly flicked on Chilwell’s centre to Rudiger to bundle in.

Players and fans alike waited with bated breath for the dreaded VAR review but when none came, celebrations tinged with relief flooded the ground.

Werner raced through on goal in a lightning Chelsea break, only to chip the ball tamely into Schmeichel’s arms.

Chelsea attacked again quickly however, and though Werner appeared to be meandering down a blind alley he was felled by Wesley Fofana.

Referee Mike Dean awarded a free-kick but his call was overruled by a VAR check, with a penalty being handed to the hosts.

Jorginho stepped up, added his trademark skip – and sent Schmeichel to one corner and the ball into the other.

Chelsea’s 2-0 lead forced Leicester to push the envelope and Iheanacho slotted home to cut the hosts’ advantage in half.

Perez had a fine chance to level late on, but blazed high and wide as Chelsea held out for the crucial win.