Home All The News Chelsea 4-0 Manchester United: No way, Jose 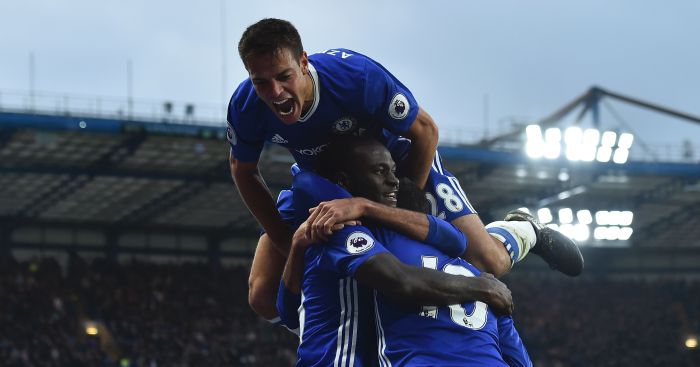 Jose Mourinho’s Stamford Bridge return started badly and only got worse as the most successful manager in Chelsea’s history saw his Manchester United side succumb to a humiliating 4-0 defeat.

Two memorable spells at the west London club’s helm brought with them eight trophies and no little controversy, with the Portuguese twice sacked by Blues owner Roman Abramovich.

Mourinho returned to the club that unceremoniously, and understandably, called time on his second stint in December, but any hope of haunting his former paymasters was swiftly extinguished as Pedro’s 30-second strike kicked off what would prove a nightmare afternoon for United.

“You’re not special any more,” chanted some of the Chelsea fans that had worshipped him as the pre-match goodwill was quickly forgotten, with Pedro landing an early sucker-punch after lax defending allowed him to score against the club he rejected in favour of Mourinho’s Blues.

Gary Cahill reacted quickly to lash home from a 21st-minute corner to compound matters for United, who were understandably aggrieved by an ugly David Luiz challenge on Marouane Fellaini.

The Belgian did not return for the second half and Eric Bailly limped off soon after, with matters worsening when Eden Hazard – so poor as Mourinho’s side stuttered last season – fired home a superb third to the delight of Antonio Conte.

N’Golo Kante opened his Chelsea account with a fine solo goal to increase the embarrassment as a Mourinho side conceded four for just the second time in a Premier League match.

This was always likely to put United’s six-match unbeaten run in jeopardy but few could have foreseen this humbling and certainly the way it started.

But Chelsea were looking the biggest threat and Hazard twisted impressively to get away a fizzing shot just wide from a corner that followed a sturdy Bailly challenge on Diego Costa – one the striker felt should have resulted in a penalty.

Frustration would turn to elation in the 21st minute, after Blind conceded a corner under pressure from Kante. Hazard swung in the set-piece that flicked onto the unsighted Ander Herrera, with the ball sitting up kindly for Cahill to rifle home.

4-0 – This is Mourinho’s heaviest PL defeat. Only against Barcelona in 2010 did he lose by a greater margin in all comps (5-0). Blue. pic.twitter.com/wjuhuPjIFH

Costa could soon have added his name to the scoresheet had he reacted better to a lovely Hazard ball.

Thibaut Courtois kept out a speculative long-range shot from Herrera and Jesse Lingard’s follow-up on a rare United foray forwards with the home side on top.

Bailly’s timely intervention stopped Costa from ending the half in the same way Chelsea had begun it, but the main talking point of the closing stages of the first period was a lunge from Luiz on Fellaini.

The Belgium midfielder received treatment after being caught on his knee and did not re-emerge for the second half, with former Chelsea favourite Juan Mata brought on.

Costa saw an effort ruled out for offside as the home side continued in the ascendancy, with Hazard perplexed by the decision not to reprimand Bailly for taking him down. It was the defender’s last involvement as he soon limped off.

Marcos Rojo came into a reshuffled back line that conceded a third after Lingard saw an effort batted away at the other end.

Nemanja Matic slipped the ball through to Hazard, with the fleet-footed attacking midfielder cutting back to hit a low strike past De Gea.

But the humiliation did not stop there. Statuesque defending was capitalised on by Kante, who burst all too easily between Smalling and Paul Pogba to direct past a furious De Gea.

The fourth goal brought with it chants of Mourinho’s name from the home fans, along with more appreciation for Matthew Harding as the club remembered the popular Chelsea vice-chairman 20 years after his death.

An impressive din continued for the remainder of the match, rising when Courtois stopped Zlatan Ibrahimovic on the turn and Rojo from distance.

There was to be no consolation for United and Mourinho had an angry-looking exchange with Conte at the final whistle.