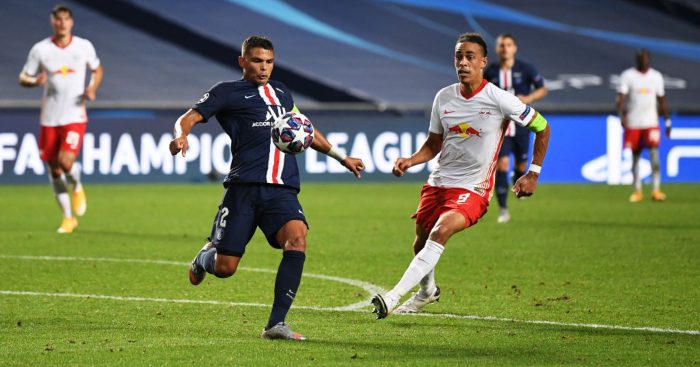 Premier League side Chelsea are closing in on the signing of Thiago Silva on a free transfer, according to a report.

The 35-year-old defender will leave PSG after their mouthwatering Champions League final clash with Bayern Munich on Sunday.

Silva has won seven Ligue 1 titles since joining PSG for £36million from AC Milan in 2012. But the French giants have chosen not to renew his contract his summer.

The Daily Telegraph yesterday claimed that Frank Lampard’s men have been offered the chance to bring Silva to Stamford Bridge.

And now Liam Twomey in The Athletic claims that Chelsea ‘might have settled on a surprising solution to their need for centre-back reinforcement’ with Silva in ‘advanced talks’.

However, there are still ‘a number of issues to iron out’ with the players’ potential contract length understood to be top of the list.

Chelsea’s reluctance to hand players over the age of 30 more than a one-year contract could prove to be a stumbling block – but they have made a couple of exceptions in the past.

The report adds that Silva has ‘harboured an ambition to play in the Premier League for many years’ but would have liked to remain at PSG if they hadn’t refused to offer him a new deal.

Lampard wants a new centre-back to bolster his back-line after Chelsea conceded more goals (54) than any top-10 club last season.

He said last month: “In terms of defensively, there is a way that I want us to play and it’s not gung-ho, it’s not crazy.

“A lot of the goals are the balls that come into our box that maybe we don’t defend right at that moment. That is something that has  to improve and I feel I know the answers to it.

“Some of it is work and that’s something we will see and it’s part of the process we are in. I don’t like it, I hate conceding goals but we have to work harder on it.”