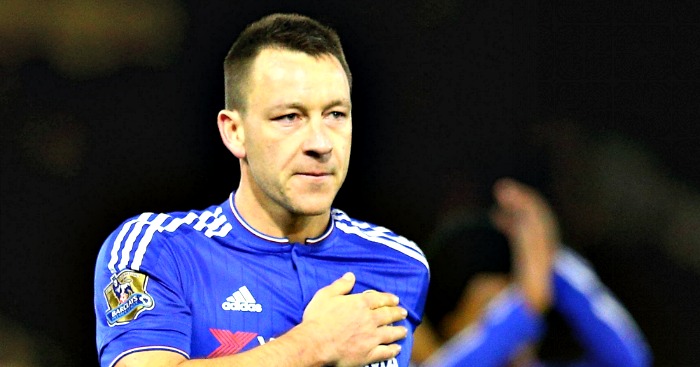 “I was in last week before the Arsenal game and it [contract] is not going to be extended.”

Speaking straight after a 5-1 victory over MK Dons in the FA Cup fourth round earlier this month, Chelsea captain John Terry dropped the bombshell: He was leaving. After 18 years in the first team – 12 as captain – the club’s heart and soul would depart at the end of the season.

What’s more, it wasn’t his decision. “It’s not going to be a fairytale ending, I’m not going to retire at Chelsea,” Terry added. “Ideally I would have loved to stay, but the club’s moving in a different direction. It’s going to be my last year and I want to go out at the top.”

It was both curious timing and a peculiar statement from Terry. Why was he the one to announce his departure? Why not the club? And why now?

Within 24 hours, those questions were answered. “John requested a meeting with the club the week before last,” a Chelsea spokesperson explained the following day. “In that meeting he asked about the possibility of an extension to his existing contract. John was advised that while no new deal was currently on the table, that situation could change in the coming months. The club has the utmost respect for John and everything he has helped us achieve to date. The club will keep the channels of dialogue open.”

Terry could hardly have expected such a swift and frank rebuttal. “My contract is not going to be extended” is hardly headline news with the word “yet” inserted at the end. He will have been all too aware of that. The 35-year-old’s current deal expires in the summer, and Chelsea, in a position of significant managerial uncertainty, have taken the understandable decision not to renew Terry’s contract. Yet.

It’s difficult to envisage Alexander Tettey announcing he is leaving Norwich in the summer, or Darron Gibson publicly informing Everton supporters directly after a match that he would depart at the end of the season. They are among the many Premier League players whose contracts expire in a matter of months. Unlike Terry, they have not declared that their exit is a formality.

Compare Terry’s actions with those of Steven Taylor. The 30-year-old has been at Newcastle as long as Terry has been at Chelsea, both players joining the youth ranks of their respective clubs in 1995. Injuries have limited Taylor to 205 league appearances over 12 seasons, while Terry boasts 479 games across 18 seasons. Taylor remained with the club even upon their relegation to the Championship, and the year they won England’s second division coincided with Terry captaining Chelsea to their third Premier League title. They are the longest-serving players at their clubs. Like Terry, Taylor’s contract expires in the summer. One has announced that his club are forcing him out, the other has kept quiet on the subject.

It isn’t difficult to understand Terry’s motives. He and the club are inextricably linked. Whenever Terry performs well, Chelsea perform well. Whenever Terry struggles, Chelsea struggle. The 35-year-old is Chelsea personified. He simply wishes to keep the fans informed.

If only. The club’s immediate response to Terry’s statement revealed all. This was a captain attempting to force Chelsea’s hand, to coerce them into offering a new deal by encouraging pressure from his adoring fans.

Attention soon turned to Sunday’s game against Manchester United at Stamford Bridge. This was Chelsea’s first home fixture since Terry’s announcment, the first leg of his premature farewell tour. Prepare your laminated A4 messages of support, don your Terry masks and recite your favoured racially abusive insult; the captain – our captain – needs us.

Not so. ‘The expected fan backlash at Chelsea for not handing a new deal to their iconic skipper did not materialise,’ wrote Andrew Dillon in Monday’s edition of The Sun after a hard-fought 1-1 draw. ‘Just one banner was held aloft before kick-off – proclaiming Terry as an ‘asset’ who deserves a new contract. It was swallowed up even before the game started – covered up by a massive club-produced banner across the heads of the fans that read ‘CFC Pride of London’.’

‘JT: Captain, Leader, Asset’. It doesn’t quite have the same ring to it. Did Terry overestimate the fanfare? The former England captain is loved at Stamford Bridge, that much is obvious. He achieved legend status long ago for his on-field achievements. He has provided a familiar face in a period of mass upheaval at the club, bridging the central defensive gap between Marcel Desailly to Frank Lebouef to Ricardo Carvalho to David Luiz to Gary Cahill to Kurt Zouma. He embodies modern-day Chelsea.

Terry also embodies the problems at the club. Chelsea are in dire need of reconstruction. Zouma’s knee injury suffered on Sunday means Terry now represents one half of a first-choice central defensive partnership which has a combined age of 65. Chelsea’s squad is one of the smallest in the Premier League, and the new manager will be tasked with overseeing a long overdue period of transition.

Time has taken its toll. The 35-year-old clings to the vestiges of his illustrious past, but Terry is no longer the irreplaceable, immovable force he once was. Chelsea adopt a system designed to mask his deficiencies: a central defensive partner with pace, and two holding central midfielders in front of him. Terry was never blessed with speed, but while his strengths overwhelmed his weaknesses a decade ago, they do so no longer. Only Zouma and Branislav Ivanovic have featured for longer in the seventh-worst defence in the Premier League.

Emotion and sentimentality often clouds judgement, but Terry no longer suits Chelsea’s needs. The club’s next manager’s first port of call will be the unenviable task of deciding whether the captain’s deal is extended for another year. By next January, unhelpful speculation will mount once more, possibly fuelled by Terry himself.

For any manager to cross the 35-year-old is ill-advised – just ask Andre Villas-Boas – but Terry must leave. His presence currently casts an all-encompassing shadow over Stamford Bridge.

“I made it very clear I wanted to stay,” Terry told Sky Sports after the Manchester United draw. “It’s a difficult one. The club is the most important thing. There is no communication between me and the club at the moment.”

The captain continues to engage in a power play against Chelsea, but he faces the only man against which he cannot win: owner Roman Abramovich. In this incessant game of poker, Terry is the player with no hand, but he cannot stop himself from bluffing. Chelsea hold all the cards. If they have any sense, Terry will be searching for new surroundings this summer. It is time to cut the cord.