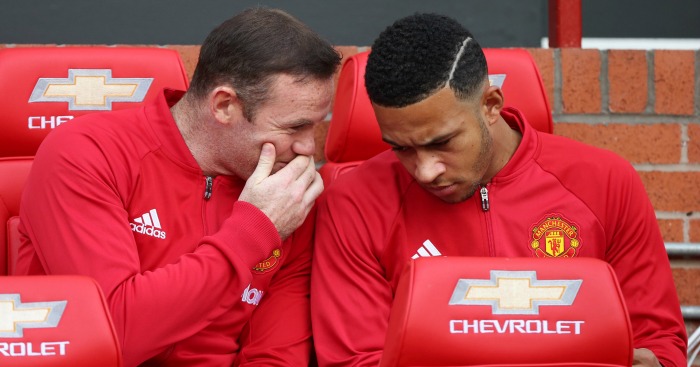 Here at Football365, we throw caution to the wind and kindly show conformity the door. While most will be considering what the best combined XI of players from Chelsea and Manchester United would look like, we’re miserable sods and hate everything, so we compile the worst.

The rules are simple: Every played must have, at the very least, been named on a substitutes’ bench for a Premier League game this season. And they can only be chosen in their actual position, or one in which they have played this campaign. Let’s go…

GOALKEEPER: Sergio Romero
Well, someone has to do it. David de Gea is a bit bloody good and Thibaut Courtois is alright himself – although his standards have certainly slipped of late. So that leaves the bridesmaids, Asmir Begovic and Sergio Romero. And the latter’s most recent Premier League appearance came last August. He conceded twice to Swansea on that day.

RIGHT-BACK: Matteo Darmian
The Italian must be thanking his stars that the Europa League exists. Darmian has featured just twice for Manchester United this season, completing the full 90 minutes on both occasions. His appearances came in the 1-0 defeat to Feyenoord and the 4-1 win over Fenerbahce. Aside from that, the 26-year-old has been delighted just to earn a place on the bench. He has been in the United matchday squad for just one game – against Stoke. He started 24 games last season, which was more than all but seven players. It seems that the 26-year-old no longer wants to be at Old Trafford; the feeling would be very much mutual with his manager.

CENTRE-BACK: Branislav Ivanovic
The regression of both Gary Cahill and John Terry can be listed as reasons as to why Antonio Conte has shifted Chelsea into a formation with a three-man central defence, but Ivanovic’s drastic loss of form was surely the key factor. The man was crowned a Premier League champion 17 bloody months ago. Roman Abramovich’s best friend looks horribly out of place in the brave new era at Stamford Bridge.

CENTRE-BACK: Gary Cahill
For a man who has had 13 different managers over the past five years for club and country, one would expect Cahill to be one of the Premier League’s leading defenders. He is a regular starter for both Chelsea and England after all, be that under Jose Mourinho, Guus Hiddink, Sam Allardyce or Gareth Southgate. You would not expect a man who has been entrusted by so many of the game’s supposed leading thinkers to be dispossessed by Leroy Fer. Cahill was fooled once; shame on the Swansea midfielder. He was then fooled again not long thereafter by Alexis Sanchez, who scored a similar – albeit far more sexy – goal for Arsenal last month.

The 30-year-old has markedly improved of late, but will he retain his place once Kurt Zouma returns to full fitness?

LEFT-BACK: Marcos Rojo
United fans must have thought they had landed a bargain. When the club announced the £16m signing of one Marcos Rojo in summer 2014, they did so in the knowledge that the defender had been named in a Team of the Tournament based on a particular performance index. He took a place alongside Lionel Messi, Toni Kroos and James Rodriguez.

The hope was that Rojo would be the second coming of Gabriel Heinze, but even better. What has followed is two years of being compared to Alexander Buttner, with this season being just as drastically poor as the rest of his Old Trafford stay. He has made the bench for three Premier League games without playing a single minute, and his last league appearance came as a left-back in the 3-2 defeat to West Ham last May.

Last season, just five outfielders played more minutes in the Premier League for Manchester United than Morgan Schneiderlin. Fast forward a few months and a new manager, and the Frenchman has become the forgotten man. Even the Mailbox has no idea where he is.

For an established 26-year-old midfielder with top-flight experience to play just five minutes of league football by late October is actually impressive. Schneiderlin has often called upon by Louis van Gaal as his trusted lieutenant, but he has fallen so far under Jose Mourinho that Timothy Fosu-Mensah has played more often in midfield.

Well f**k you, Jose, because this is my team. And anyway, Rooney played in midfield against Watford in the 3-1 defeat in September. And he was really, really good.

Are you bored of us talking about him yet?

RIGHT-WINGER: Pedro
With Henrikh Mkhitaryan profiting from a perhaps generous benefit of the doubt, it is Pedro who takes a place on the right-wing of this side. Mkhitaryan was dreadful in the Manchester derby when employed from the wing, but this is his debut season in England, and he has struggled with injuries and the transition from the Bundesliga.

Pedro has no such excuse. Over a year after he moved to Stamford Bridge, the Spaniard continues to offer little to the Chelsea cause. He has played nine games in all competitions so far this season, assisting just two goals. He has missed just one game, yet Conte has afforded him only 189 Premier League minutes. There is a reason. And that reason is that he is not very good.

ATTACKING MIDFIELDER: Ruben Loftus-Cheek
When Nathaniel Chalobah produced a quite wonderful flick to set up Victor Moses’ goal against Leicester on Saturday, he reminded the footballing world that Ruben Loftus-Cheek is not the only Chelsea youngster looking to become the next Frank Lampard/Sam Dalla Bona. What’s more striking is that Chalobah is over a year older than his teammate, and now has as many Premier League assists in his two top-flight games than Loftus-Cheek does in 16. He might well have jumped ahead of him in the squad’s pecking order.

LEFT-WINGER: Memphis Depay
Congratulations to the Dutchman for completing a remarkable hat-trick. Depay was named in our combined dregs of Liverpool and Manchester United players in March, and repeated that feat in a Manchester derby-based XI in September.

He could be brilliant. He could continue to falter. But we all yearn for the days when his choice of car or headwear was breaking news across the country.

STRIKER: Michy Batshuayi
It seems ruddy harsh, but only because it is. However, he is unfortunate that his competition is provided by Diego ‘seven goals and two assists in eight games’ Costa and Zlatan ‘four goals in eight games’ Ibrahimovic. The latter is struggling for Manchester United, having scored just once in his last seven games, but Batshuayi simply has not played enough.

Not that that is his own fault. Conte has been strangely reluctant to use his £33million summer purchase. Only three players – Chalobah, Loftus-Cheek and Ola Aina – have played fewer Premier League minutes than his 53. And yet he still has a goal and an assist in that timeframe. In fact, I’ve almost convinced myself to put Ibrahimovic in here…