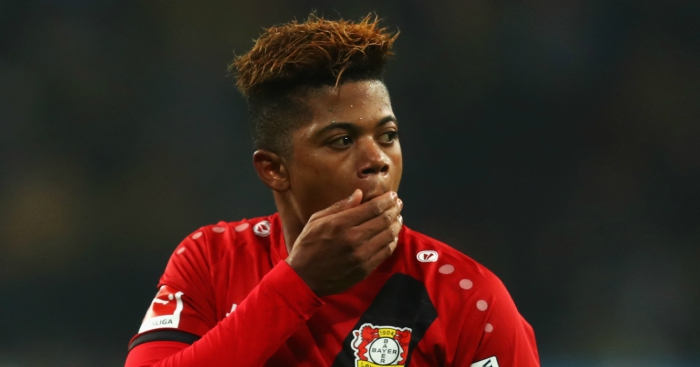 Chelsea have added Leon Bailey and Samu Chukwueze to their list of attacking targets for January, according to the Telegraph.

With their transfer ban lifted, the Blues are being linked with a wide range of players, with the wings one area where they are expected to strengthen as Willian and Pedro see their deals run down.

Indeed, the Telegraph think Pedro could leave for the MLS in January, while striker Olivier Giroud is also set for the exit door.

To replace the Frenchman, the club are said to have eyes on RB Leipzig striker Timo Werner and Lyon’s Moussa Dembele, but it is warned that neither is likely to join mid-season when their respective clubs remain the Champions League.

Therefore, they could bolster their options for the wings instead, with Bayer Leverkusen’s Bailey and Villarreal’s Chukwueze listed as more achievable alternatives to Crystal Palace’s £80m-rated Wilfried Zaha.

Bailey was linked with Chelsea last winter, while Chukwueze has admitted to being a boyhood Blues fan.

22-year-old Bailey has three goals and one assist from eight Bundesliga appearances this season.

Meanwhile, Chukwueze has provided identical stats from 16 games in La Liga, and represents the youngest option on their shortlist at 20 years old.

Defensively, The Telegraph say Frank Lampard wants to activate their buyback clause for Nathan Ake, who, while primarily a centre-back, could provide the necessary cover at left-back if Marcos Alonso left for a reunion with Antonio Conte at Inter Milan.

Chelsea have the option to re-sign Ake from Bournemouth for £40m.