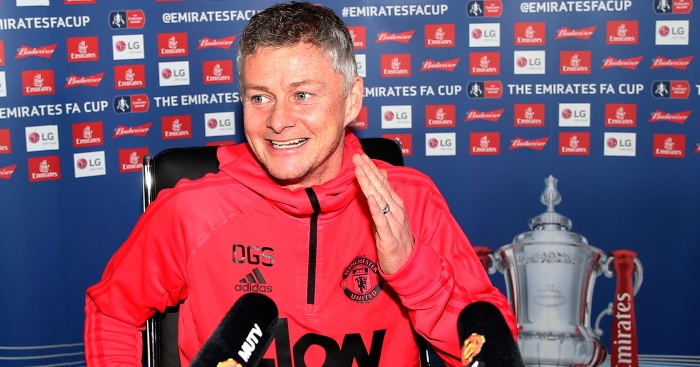 Gianfranco Zola admits he is happy to see Ole Gunnar Solskjaer making a “remarkable” impact at Manchester United, despite it adversely affecting Chelsea.

United have overtaken the Blues in the race for Champions League qualification on the back of Solskjaer’s unbeaten Premier League record.

The two clubs meet in the FA Cup fifth round at Stamford Bridge on Monday evening in a repeat of last season’s final.

Chelsea assistant boss Zola, who earned his coaching badges alongside Solskjaer, was full of praise for the Norwegian, in spite of their current rivalry and conflicting interests.

“I am pleased, first of all. That is my first feeling,” said Zola.

“Ole and I did the course together, so I’m pleased to see him doing so well.

“He was always interested and focused on what he was doing, and I’m pleased he’s showing his quality.

“I knew United were going through not a very good moment before, but I knew the value of the team and that they’d come back.

“What Ole has done in a short period of time has been quite remarkable.”

Former United striker Solskjaer has collected 25 points from a possible 27 since replacing Jose Mourinho at Old Trafford in December, while inconsistent Chelsea have picked up just 13 points during the same period.

The contrasting form has propelled United to fourth position in the top-flight, with Maurizio Sarri’s Blues a point and two places behind following last week’s 6-0 thrashing at Manchester City.

“You can see they’re a team who, at the moment, are enjoying what they’re doing,” continued Zola.

“They are committed, working with each other as a group. When you have these qualities and this attitude, the qualities they have, the results can only be good.

“Strange because, you know, the only thing you can say is that they had a very good coach before.

“Sometimes things don’t work out. But the value of the team wasn’t in doubt before, and it’s no surprise now they’re doing what they’re doing.”