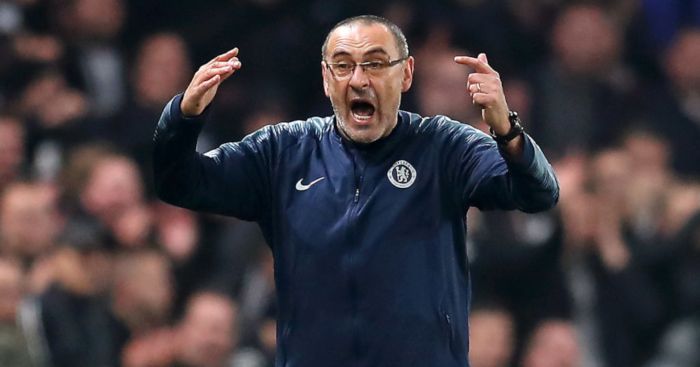 Maurizio Sarri believes Chelsea “deserve” to win the Europa League at the conclusion of what has threatened to be such a difficult season.

The pressure is easing on their manager after they secured a top-four finish in the Premier League just days before Thursday’s semi-final victory over Eintracht Frankfurt ensured their passage to the Europa League final against Arsenal.

With Chelsea and their German opponents again level at 1-1 at the end of extra-time, they required penalties to progress to the showpiece in Baku and eventually won 4-3 after Cesar Azpilicueta’s earlier miss left them at risk of defeat.

Sarri’s team could finish the season back in the Champions League and with a major trophy having lost in the League Cup final to Manchester City and after their unconvincing performances regularly suggested his job was at risk.

The decisive penalty at Stamford Bridge was also scored by Eden Hazard, whose appearance there could yet prove his last as a Chelsea player, and the 60-year-old Sarri said: “We played the first final against Manchester City and lost. So now we want to win. Our group deserves to win.

“We were in trouble three months ago and, here in England, if you’re in trouble the level of opponents is very high and it’s not easy to overcome difficulties. We were able to do it. So now we deserve to win a trophy.

“Getting to the final of the League Cup, we had to play against Liverpool, against Tottenham, the finalists of the Champions League, then we played against the best team in Europe in the final, Manchester City. At this moment, the Premier League is the best championship in the world.

“There is no preparation for penalties because you can kick very well in the training ground and then the pressure is different. You need a great personality. Great character. It’s really useless to try penalties.

“Now we need to rest. Then we have 10 days to prepare the final. We have to recover energy because we are really very tired.”

Chelsea were already below full-strength when they lost Andreas Christensen and Ruben Loftus-Cheek to injuries, but after insisting neither was serious, Sarri revealed “superstition” meant he resisted speaking to his players at the end of extra-time.

“I don’t want to enter on the pitch; a superstition,” he laughed. “I don’t need to talk to them. I spoke with (assistant manager Gianfranco) Zola so they knew very well what to say.

“I (also) didn’t want to suffer (by watching the last two penalties).”

The 28-year-old Hazard was asked if he had played his last match at Stamford Bridge, and he told BT Sport: “I am only thinking to win something for this club. If it’s my last game I will try to do everything. If it’s not, we’ll see. In my mind I don’t know yet.”

Frankfurt manager Adi Hutter, 49, added: “I am very proud. The Chelsea players were anxious, shouting at each other and the Chelsea fans were nervous.

“The disappointment is very big, the heads are hanging low.”