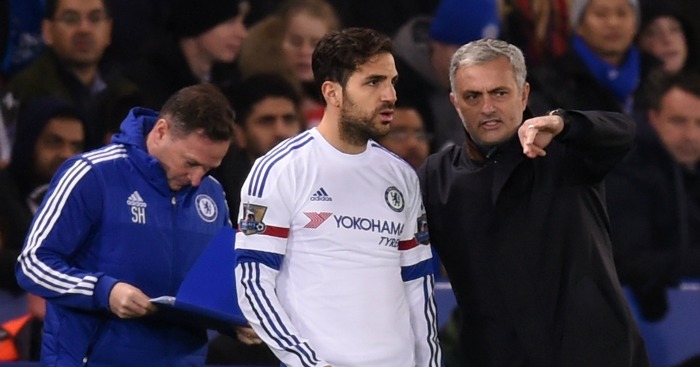 Premier League legend Cesc Fabregas has revealed Jose Mourinho’s key role in his move to Chelsea from Barcelona, amid interest from Manchester United, among others.

Fabregas returned to the English top flight in 2014, with the Portuguese boss convincing him to move to Stamford Bridge instead of Man City and United.

The playmaker was reportedly keen on a return to former club Arsenal but Arsene Wenger snubbed the chance to re-sign him.

Chelsea went on to win the Premier League title in Fabregas’ first season there, and he enjoyed a solid four-and-a-half years at the club before leaving for Monaco.

And the former Spain international has explained his decision to move to the Blues.

“Once I decide to leave (Barcelona), Arsenal will have the first option of any other club and I cannot speak to any other club for one week to see if Arsenal want me or not,” he told Arsecast.

“Arsene didn’t give an answer, we just had to wait one full week to see if they responded.

“Definitely this was my first option, in my mind I’m telling everyone I’m going to Arsenal – this is what I want. Arsene can see this.

“I didn’t want to be a beggar, they know the situation, in one week they haven’t said anything, straight away I knew they probably didn’t want me back.

“They waited the full week without giving me a response.

“After the week I had to take my chance, I had Manchester City, United and then I spoke to Mourinho – which I didn’t think would ever happen.

“To be honest, after I left the room with Mourinho I said, ‘that’s it, I don’t need to talk to anyone else, I’m going to Chelsea.’

“What he told me, the team he wanted to make, what he thought of me, how he wanted me to play, this is what I wanted.

“On top of that it’s London and not Manchester, London was my home.”

Fabregas went on to make 198 appearances across all competitions for Chelsea, scoring 22 goals in the process.

During that spell the midfielder won two Premier League titles, as well as the 2018 FA Cup and 2015 League Cup.