Home All The News Chelsea-linked Hasenhuttl advises Lampard over Werner 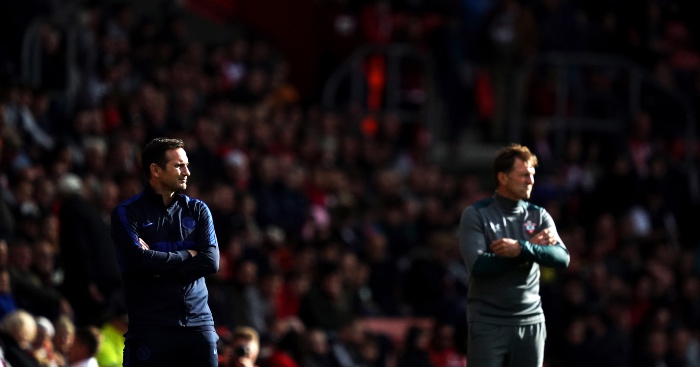 Southampton boss Ralph Hasenhuttl has given Frank Lampard some advice over Timo Werner.

The £47million summer signing started brightly in England but has scored just once in his last 14 appearances in all competitions, against Morecambe in the FA Cup.

Frank Lampard has admitted Werner’s confidence is low, with the German forward missing a number of chances he would ordinarily have gobbled up.

F365 says: Frank Lampard will be sacked…it’s now when, not if

Hasenhuttl is reportedly on a five-man shortlist to replace Lampard at Chelsea, with the Blues hierarchy keen on a German speaking manager to take over at Stamford Bridge.

Not only does Hasenhuttl know the lingo – and will be able to communicated effectively with Chelsea’s big summer signings – but also worked with Werner at RB Leipzig, who he insists must be played in his “best position”.

“I know Timo very well and I have seen him in situations where he was not good,” said Hasenhuttl.

“Most of the time when I have seen this is because of the reason that the game doesn’t fit to him. The team didn’t play in the way he can bring his best on the pitch, I think.

“He is definitely a player where you have to adapt your game on him. If you do this, he will give you everything you need from a striker. But therefore, he has some qualities you really have to focus on.

“The good thing for him, I think at Leipzig, when I was there, is we concentrated completely on his qualities.

“With our quick transitions after winning the ball, it was perfect for our game. But also when he was with Julian [Nagelsmann], he was also scoring a lot of goals.

“But yeah, you really need to bring him into his best position so he can bring his strength on the pitch and then, for me, he is one of the best strikers in Europe.”

Speaking ahead of Tuesday’s trip to Leicester Lampard admitted he needs to lift Werner.

“All players will experience it in their career. All eyes are on and it becomes magnified. I need to work with him on it,” said the Blues boss.

“I’m not comparing him to anybody. Everybody is different, (Fernando) Torres had difficult times here but won the Champions League. All we need to do is create the best environment to get the best out of Timo.

“You must repeat, keep working and he needs to keep his head down and focus, I need to give him positivity.”