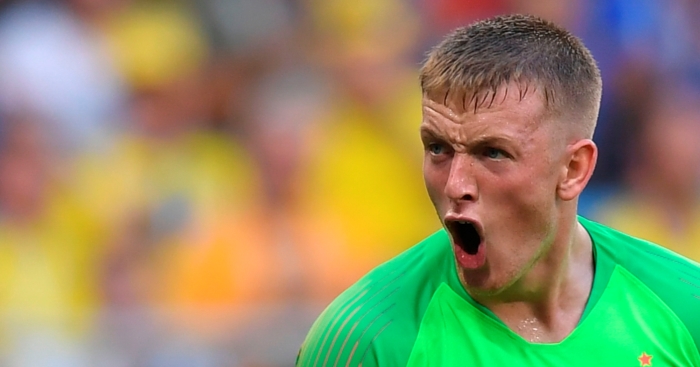 Jordan Pickford insisted he never entertained the idea of leaving Everton following his standout World Cup after committing his future to the Toffees.

The 24-year-old signed a new six-year contract with Marco Silva’s men on Wednesday, 15 months after joining the club from Sunderland in a record transfer for a British goalkeeper.

Several of the biggest clubs at home and abroad were linked with a move for the stopper after an impressive showing for England in Russia, with Chelsea reported to have made him their ‘primary target’ in the event of Thibaut Courtois leaving.

The Belgian did indeed depart for Real Madrid, but Chelsea opted to break the world-record fee for a goalkeeper to sign Kepa Arrizabalaga from Athletic Bilbao instead of Pickford.

The England goalkeeper insists he paid no attention to the rumours.

He said: “I think you see it all over (the media). I don’t let it affect my performances. I just knuckled down. I knew I had a contract with Everton and didn’t at any time think anything else.

“You’ve just got to keep performing and put that to the back of your mind. You just don’t let it affect you – even if you see speculation.

“It’s been a whirlwind of a year and been a big leap for me personally. I think just getting this contract signed can only put it to bed and get the progression for myself to become better and better. I feel it’s a great step for the club and a great direction to be heading.”

Asked if he could see himself ending his career at Goodison Park, Pickford added: “That’ll take me to 30, I’ll be getting old then. It’s about getting that next deal as well.”

Pickford made an immediate impact after being given his Premier League bow by Sunderland aged 21 but believes the move to Merseyside was crucial.

He said: “If I wasn’t here then I might not have been with England at the World Cup so I think this move has improved me massively.

“I’ve had four keeper coaches since coming in. I’ve adapted to each of them and I think they’ve all improved me. I’ll never stop learning. It’s about maturing and getting better on that side of it.”