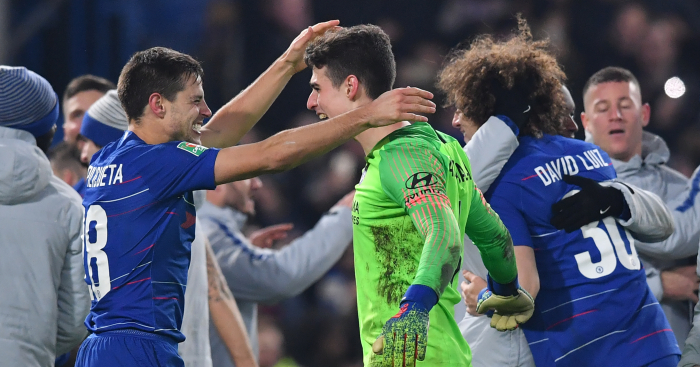 Chelsea’s decision to fine goalkeeper Kepa Arrizabalaga one week’s wages could ’cause more damaging splits in the Chelsea dressing room’.

Chelsea announced that the Spaniard, who earns anywhere from £160,000 to £190,000 a week, has been punished for his refusal to be substituted during the League Cup final.

The Blues hope that will be the end of the matter. Going by Tuesday’s newspapers, it really won’t be.

The dressing room reaction
While the Daily Mail say that Maurizio Sarri was heard ‘screaming’ on the touchline “How could you do this?” in his native Italian, The Sun bring us news of what went on behind closed doors.

The Chelsea manager reportedly ‘went wild in the dressing room’, which is just a glorious image. He ‘lost his rag’ with his keeper, while even Gianfranco Zola ‘also made his feelings known’. And that’s when Kepa must have realised that he f***ed it.

Sarri also compared his intention to swap Kepa with Willy Caballero to substituting ‘one misfiring forward for another’. The Sun quote a ‘Chelsea source’ as saying the following:

“First he screamed at Kepa by telling him it was the striker’s job to score and that he had the option to change one misfiring forward for another.

“He went on to say that keepers were in the same position – and if he believed another keeper could do a better job he had the right to make the change.”

So it was nothing to do with his injury then?

That seems to be a load of old balls. The Daily Mail quote a source as confirming that the planned change was “tactical”, and that Willy Caballero’s displeasure will only ‘add to the notion that the substitution was pre-planned and not as a result of an injury to the Spanish keeper.’

The Times claim that ‘Sarri was considering replacing Arrizabalaga with Willy Caballero for the shoot-out because of the Argentine’s goalkeeper’s excellent record of saving penalties’. So the misunderstanding line just seems to be, well, a misunderstanding of sorts.

Furious Willy
The real victim here is Willy Caballero, who was ‘particularly angry’ (Mail)/’enraged’ (Mail)/incensed (Times). The Mail add that ‘he was at pains to avoid any interaction with Kepa after the game’.

According to The Times, ‘several Chelsea players are believed to be sympathetic towards Caballero, who has become a popular member of the squad’. Which probably explains why Kepa sought to publicly apologise to him in Monday evening’s statement.

And that has led to potential divisions within the Chelsea squad. The Daily Mail say some players are ‘furious’ at Kepa ‘for not following instructions’, but that ‘other members of the squad are backing’ the Spaniard.

That is a line repeated in every newspaper, none of whom actually shed a light on who is backing either the player or the manager. Shame.

But the Daily Telegraph might well have simply added two and two together and come up with 427. They say ‘the club’s Spanish contingent…are a close group who stick tightly together’. Cesar Azpilicueta, in particular, ‘made his feelings clear by arguing with Sarri at the end of extra-time and then congratulating Kepa for his shootout save from Leroy Sane.’

‘It appeared Azpilicueta was backing his close friend and compatriot,’ while Pedro and Marcos Alonso – who was dropped for the final – could well support Kepa too.

Sarri, for his part, has sought to draw a line under it all. He ‘opted to emphasise the positive elements of the side’s vastly improved performance’ at a team meeting after training on Monday.

Chelsea’s view
The club themselves have apparently ‘taken a dim view’ of the keeper’s actions. The Times go on to state that ‘representatives of the board have spoken to him about his behaviour’.

That escalates a little more by the time it reaches the Daily Mail, who report ‘a degree of anger within the corridors of power at Stamford Bridge’.

They add that it has come as quite the surprise as ‘only last week one senior Chelsea source’ noted Kepa’s ‘timid and straightforward character’, which had been ‘a welcome change’ from his predecessor, Thibaut Courtois.

Will he play against Tottenham?
Apparently so. The Times are among the many who say Kepa is ‘set to keep his place’ for Wednesday’s Premier League game.

But then you have the Daily Telegraph, who say ‘it seems inconceivable that Kepa would start at Stamford Bridge against Spurs as Sarri can put any changes for this game in particular down to fatigue’.

No-one knows, basically. But Willy Caballero is f***ing angry and someone had better pay for it.