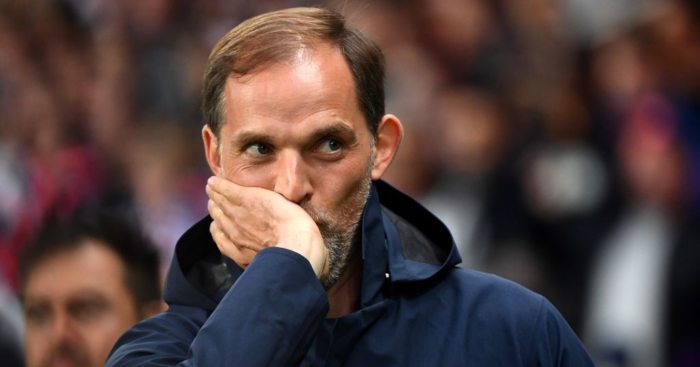 If Maurizio Sarri leaves Chelsea this summer then the club could turn to Paris Saint-Germain boss Thomas Tuchel, according to reports.

Sarri has led his side to a third-placed finish in the Premier League – despite being 26 points behind champions Manchester City – the League Cup final and they could still win silverware in Europe.

The Italian arrived from Napoli last summer but has drawn plenty of criticism for his tactical stubbornness despite relative success, with supporters often vocally criticising his style.

Sarri has admitted that he wants to stay at Stamford Bridge but recently refused to offer any assurances amid links with the Roma job, but it seems that Chelsea may already be plotting his replacement.

The Evening Standard claims that the Blues are looking at a number of potential replacements should Sarri be axed or decide to leave.

Frank Lampard, who has impressed in his debut season at Derby County, is one option – as is Massimiliano Allegri who will be leaving Juventus at the end of the season.

The most surprising name mentioned though is that of PSG boss Tuchel, who is apparently being ‘lined up’ despite a sub-par season with PSG.

The former Dortmund head coach guided the Parisiens to the Ligue 1 title, but they crashed out of the Champions League after collapsing in the second leg against Manchester United and failed to secure either of the French cups.