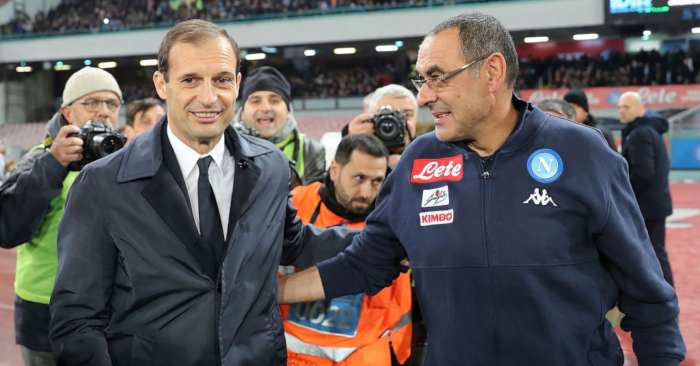 Maurizio Sarri has informed Chelsea of his desire to return to Italy to manage Juventus this summer.

Sarri was appointed Chelsea head coach last year, finishing third in the Premier League, winning the Europa League and losing the League Cup final on penalties in his first season in England.

But constant criticism of his style and a smattering of poor results is said to have taken its toll on the 60-year-old, who wants to end his reign after completing just half of his initial two-year contract, which had a one-year option included.

The offer from Serie A champions Juve has proved too tempting for Sarri, with The Guardian one of many outlets to report that Sarri told the Chelsea board of his intentions during a planned meeting to discuss his future this week.

Sarri cited ‘family reasons’, as well as the chance to manage Juve, as his reasons for wanting to leave. The Independent say Chelsea ‘would be prepared’ to let Sarri continue his work, but will accept his decision if Juventus buy out the final year of his deal, worth £5m.

Both outlets suggest that Chelsea have a three-man shortlist of potential replacements, including Derby County manager Frank Lampard. Which would actually make sense.