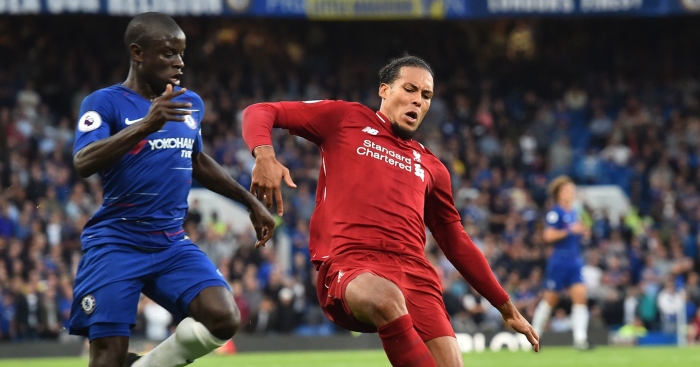 One of those lopsided weeks where most of the top performances were concentrated in a couple of positions, central defence and deep/central midfield. In fact, there was no space for a true attacking midfielder, so we have a fairly conservative 4-3-3. Oh, and eight of the 11 players come from only three teams – but two of those teams are Liverpool and Chelsea. Great match.

Goalkeeper: Alisson (Liverpool)
Line up your Elvis Costello references, because Alisson’s in the house. Several keepers made fine saves this weekend, but his two one-v-ones carry off the prize. What’s fascinating is how different they were. The one against Willian was a classic make-yourself-big number. But against Hazard he went down a bit lower, presumably expecting a ground-level shot. Hazard didn’t do too badly, because if the keeper spreads wide, the ball probably goes through his legs and in. But Alisson anticipated the shot perfectly. And don’t forget the couple of times he raced off the line to prevent good chances. Should he have saved Hazard’s goal? Former Sunderland keeper David Preece, who does the best GK analysis on the internet, says no.

Question marks over the keeper? I think it’s a great finish. In a perfect world Alison’s feet would be set earlier but he can’t set until Hazard’s back-lift begins. He’s adjusting his position to the ball. As momentum is moving right, it would take a great save to get back across

Incidentally, Bernd Leno had a pretty good second half for Arsenal, making two neat saves and coming off his line with assurance.

Right-back: Pablo Zabaleta (West Ham United)
The boy can still play a bit. Knew exactly when to get forward, and was very useful when he did, including a fine assist from the byline. Had a short period in the second half where he struggled, beaten by Anthony Martial and failing to pick up Marouane Fellaini on a cross. But he made several fine defensive plays over the course of the match, and it was his pressure on Marcus Rashford that started the move ending in the clinching goal. He’ll be 34 in January; I frankly got chills watching him intercept a pass in the 92nd minute and race up the pitch like in the old days.

Centre-half: Virgil van Dijk (Liverpool)
It’s amazing how different people can see the same game and rate the players so differently. The Liverpool Echo’s rating and verdict: ‘Virgil van Dijk 7. Strode out of defence several times and dominated Giroud. Any Chelsea attempts to ruffle him failed. His pace running back proved vital as the visitors started to counter second half.’ My rating and verdict: OMG OMG OMG GIVE HIM THE BALLON D’OR NOW and no rating because the numbers don’t go high enough. I suspect the truth is somewhere in between, but that’s my story and I’m sticking to it. He did everything, and did it all perfectly. Watch the video and see what you think.

Only Eden Hazard beats him in our players of the season so far.

I think it’s time to admit that Virgil Van Dijk is the best defender in the Premier League by a country mile.

Centre-half: David Luiz (Chelsea)
I thought long and hard about this one. He was brilliant as only he can be, seemingly everywhere at once. Whenever you looked he was doing something remarkable. And yet he froze when Xherdan Shaqiri dashed through for the best chance of the night. But all things considered, the ‘one big mistake’ rule, plus his spectacular play throughout, put him on a level with Fabián Balbuena, and he slips in on the newbie tiebreaker. I adore David Luiz, but he still wouldn’t be my choice for a reliable centre-half.

As for Balbuena, the only reason he’s not on the list is that he was on last week. At Stamford Bridge he mostly sat in a deep and narrow back line, but against United at home the Hammers attacked, particularly in the first half. So he had to do more individual marking, and decide when to go forward and when to stay back – and was superb. He’s quick, smart, good with the ball at his feet. Average at best in the air, but at the moment that’s the only weakness I can see.

There were several more worthy performances at this position, near-misses for the list. Christian Kabasele was excellent vs. Arsenal but also conceded the stonewall penalty Anthony Taylor refused to award. Jamaal Lascelles had a strong match (literally: at one point he was forced to give Wes Morgan a piggyback ride), but Harry Maguire outjumped him on a corner and nearly scored. Maguire himself had a very good second half, and was a constant danger on set-pieces, but also had a couple of early defensive misjudgments. Steve Cook had a good steady match for Bournemouth, which in most other weeks would have made him a contender.

Left-back: Jonny (Wolves)
Largely by default, because at the league’s deepest position, we finally hit a dry week. Nothing against Jonny, who is a heck of a player. But aside from the goal, it was a solid, unremarkable performance, like that of his teammates. Elsewhere, Patrick van Aanholt also scored but was erratic on defence, José Holebas had some decent moments and a few good set-pieces, and Adam Smith kept threatening to have a good game but ultimately didn’t quite.

Central Midfielder: Georginio Wijnaldum (Liverpool)
A performance of consummate class and intelligence. (Except for the one backpass, of course.) Chelsea didn’t put as much pressure on the ball as usual, but that should take nothing away from his coolness in possession and his effective work in attack. Incisive play from beginning to end. He may not have created a single chance himself, but many of Liverpool’s best sequences don’t happen without him.

Central Midfielder: Mark Noble (West Ham United)
Don’t know what Hammers fans think, but I rated that Noble’s best performance since trilobites ruled the seas. In recent years he’s done a lot of running around to little effect, but on Saturday I lost count of the loose balls he snaffled and the dangerous counter-attacks he started. Climaxed the match with a very well-earned assist. He did let Marcus Rashford get in front of him on United’s set-piece goal, but it needed a spectacular finish, and Fabianski probably should have done better anyway.

Central Midfielder: N’Golo Kanté (Chelsea)
Another flawed but remarkable performance. He was bypassed a few times, and failed to close down Daniel Sturridge on the goal. But like David Luiz, he seemed to be everywhere, and we also caught glimpses of the way he used to spring the counterattack at Leicester City. He is most emphatically not a box-to-box midfielder, but against top attacking teams like Liverpool he’s essential. That’s when he can do the kind of things that make him the best in the world at his position, if they’d ever let him play it.

Étienne Capoue deserves a mention. Watford press a lot, and Capoue is often stuck guarding the barn door. Although he’s not the quickest, and not a specialist defensive midfielder, his timing and positional sense have been crucial to the Hornets’ defence. Against Arsenal he was beaten cleanly only once, and his two tackles, five interceptions and four clearances were a good measure of his performance.

With such excellent play in deep midfield, the attacking midfielders missed out. Gylfi Sigurdsson was peripheral for the first 45 minutes, then took command for around 15, building the attack and scoring a fine goal to make up for his penalty miss. His second goal was a Frank Lampard late-arriving special, but what was Marcus Bettinelli doing, besides putting his weight on the wrong foot? Meanwhile, James Maddison strolled for 90 minutes, distributing consistently and precisely, getting all five of his key passes from set pieces.

Winger: Felipe Anderson (West Ham United)
A complete performance. He was less spectacular than usual, but did a little of everything: scored, combined well with his striker, caused problems on the counterattack, threw in a couple of good set-pieces, and even played some impressive defence. He has the air of a player receiving the right coaching at the right time. And I’m sure we’ll see more of the spectacular as the season progresses.

Felipe Anderson looks a good player. If he keeps it up he'll soon move into 'there's not a chance he's at West Ham in a year' territory.

Winger: Josh Murphy (Cardiff City)
The first Bluebird of the season is the longtime Canary. Started the match in decent form, got better as it went on, and in the final minutes was frankly brilliant. Dribbled, drew fouls, crossed effectively, scored a beauty, was robbed by Joe Hart of another. And it was in fact Josh, not Jacob – I checked to make sure.

Murphy’s late charge knocked his teammate Victor Camarasa out of the spot, but the Betis loanee was excellent throughout. He has a little bit of pace and a fair amount of skill, and tested the Burnley defence with good passing both short and long. He can play either wide or in the middle, and when Cardiff finally win a match, I’m betting he’ll play a large part. Elsewhere, the City pair of Leroy Sané and Raheem Sterling were mostly kept in check, except when they weren’t. Favourite moment of the weekend: Sané’s run to create space on Sergio Agüero’s goal. Textbook stuff, true – but the textbook is Shakespeare.

Striker: Harry Kane (Tottenham Hotspur)
Maybe not superior vintage Harry Kane, but a good enough year to improve the meal. With Son Heung-Min finally back, he can play centrally in a 4-3-3 and be the primary point of attack. In the last two matches he’s had 46 touches both times, his most since the opening week. And although one of the goals on Saturday was a penalty, nobody takes penalties like Harry Kane.

Elsewhere, Marko Arnautovic and Alexandre Lacazette had similar matches, both working hard and getting a late reward. Right now Arnautovic has an excellent understanding with Felipe Anderson, but I still think Pierre-Emerick Aubameyang has to be brought in from the wing more often to combine with Lacazette.