Home Mailbox Chelsea 0-0 Liverpool (5-6 pens): The Mailbox reacts to ‘another damp squib’ for the Reds 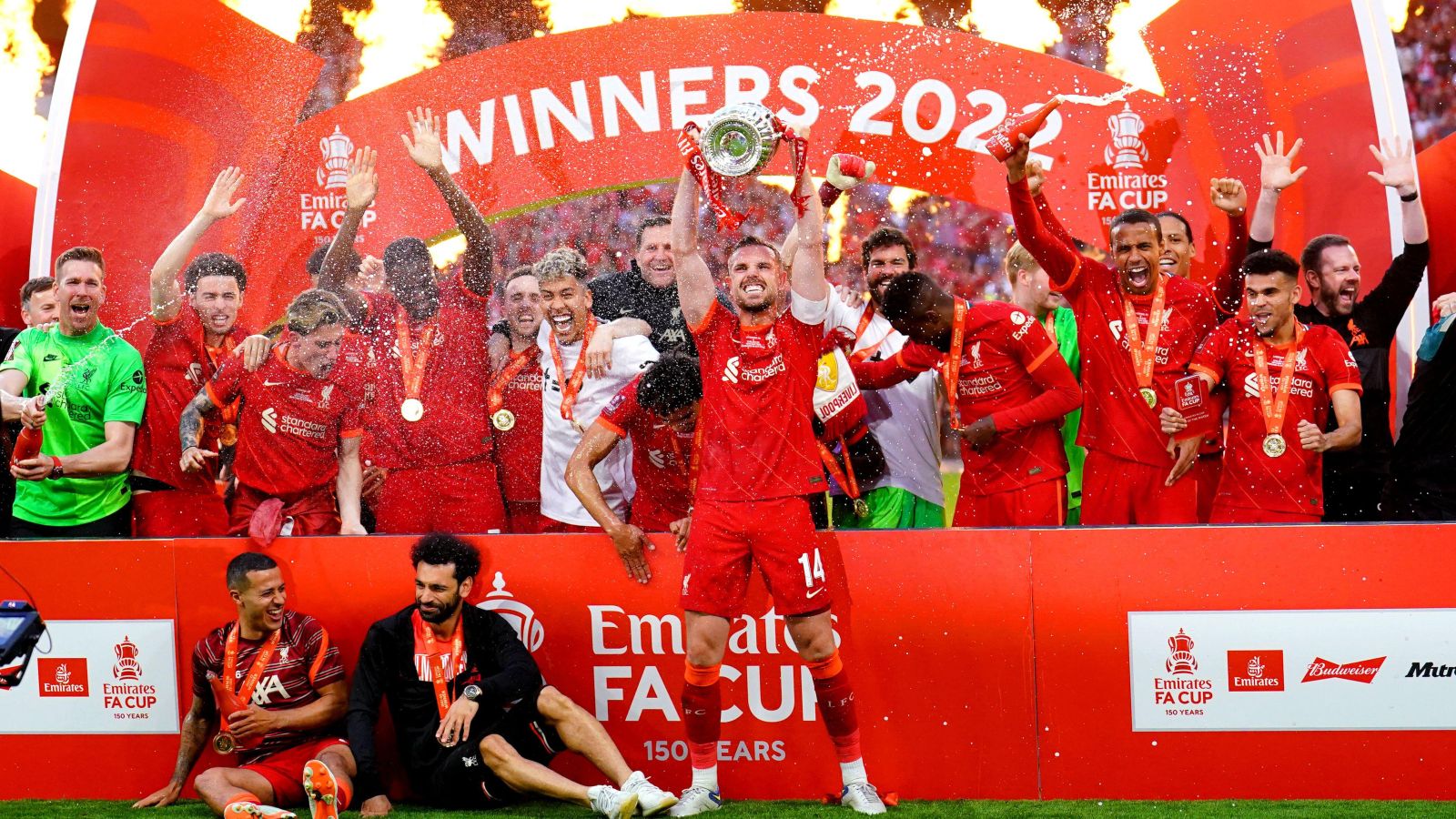 The Mailbox reacts as Liverpool win their second trophy of the season, while there is a lot of praise for Chelsea too…

Get your thoughts in to theeditor@football365.com…

Chelsea 0-0 Liverpool (5-6 pens)
God that game was really tense viewing throughout. Ultimately both teams had chances and if either had won it I think you would’ve said it was fair enough. I really thought Robertson was about to win it at the death and felt like there was more goal to hit than there was to miss but it is what it is.

I can’t believe that Mo, Robertson and Virgil all had to go off injured. I really hope they were mostly precautionary because that is terrible news if they’re all out and it’s only two weeks from the Champions League final. If Man City beat West Ham tomorrow then I won’t be surprised if we accept the league is done and field a B Team on Tuesday for Southampton. I say this but I know that Klopp loves rhythm so he will definitely field a team he expects to win. Matip was imperious when he came on but ultimately I’d always prefer Van Dijk to be there than not.

Diaz was our best player today. He is something really special. It’s exceptional how he consistently cuts inside but does it so unpredictably that defenders seem to really struggle. Reece-James was way too far up the pitch for most of the game so he found a lot of open space in behind to cause trouble.

Credit as well to Trent who was our best defender today. He was pretty much always where he was supposed to be and made a number of vital interceptions.

2 out of 4 is a lovely outcome so far. Realistically the league will be a step too far but I think this result also helps ease the pressure on the Champions League final. Lose today and the players have it in the backs of their minds that if they don’t win in Paris it’s been a poor season overall. Now they’re in a position where they’ve had a good season which potentially becomes a great season with one final push.
Minty, LFC

I’d just like to say that that was a fantastic spectacle of football, worthy of a cup final.

I would have been obviously gutted to have lost it but had that been the case I wouldn’t have felt too disheartened.

Liverpool had the better of the chances in my opinion and should have put the game to bed a few times but Wheng you don’t convert the opportunities you leave yourself open to the opposition getting back into the game which is what they did.

Still, it went to pens and how narrative was it that Sadio faced his compatriot for the winning kick only for it to be saved.

Just to compliment Chelsea playing such a great match with Liverpool. Neither team deserved to lose the peno shootout 🙁

As an LFC fan, I thought we shaded the shots and chances (2 strikes of the post instead of 1 for Alonso). But Chelsea certainly made us suffer at times and could easily have won given the plethora of chances Pulisic had but juuuuuuust missed.

And it was also touching to see Klopp praise the Chelsea team, and Alisson praise his opposite counterpart Mendy for an outstanding job keeping us out. The injuries were a shame, but it was nice to see Liverpool not back down and not give up. We cruised at times, but we also turned up the intensity in moments and could have grabbed the winner. As did Chelsea.

Really well played game. Totally did not waste a moment of time watching the entire match right down to the nailbiting penalty shootout. Such a great game. Lacked nothing except goals. Neither team deserved to lose, to be honest.

Shame it had to be decided by a penalty shootout, but if not, we’d probably have to cart off the players with cramps or injuries.

Better luck next time, Chelsea. You guys deserve it.
Much respect for your play.
Gab YNWA

Well that’s one less drunken Saturday in May  for the missus to worry about.
Jason G, Montreal LFC

Alisson
Did anyone else notice that Alisson’s save from mounts penalty was actually a double save? Could’ve been a very embarrassing moment, the ball bounced from the save & had the spin and power for it to have gone back to the goal. Even with the euphoria of saving such a big penalty he had the composure & concentration to catch the ball as it bounced back.
Marcel G, LFC (the quad is still on).

Another ‘damp squib’…
Watching Liverpool win trophies in the manor they do is quite perplexing. They never win in style. It’s always a win on penalties on a damp squib like against Spurs.

This team has no character, in fact their manager is the reason people care about them. Their style of football is that of suffocating their opponent’s. If that doesn’t work they draw or win by a goal. The great premier league teams throughout the era would absoulutly destroy this Liverpool team.

They’re a team that loves chasing the car but has no idea what to do when it catches it.

I don’t think this Liverpool team had any personality no matter how hard the fake Klopp tries to pretend their underdogs.

A cup team, a very good cup team is all they are.
Bryan

Monkeys and typewriters
Given the success Liverpool is achieving, I should be beaming from ear to ear, feeling high as a kite. And I am.But I have to address the press narrative out there.
“This Chelsea team is near Liverpool’s level, they weren’t beaten by them in 4 games.” What?

This Chelsea team has been built with billions of pounds since 2001, and was City before City out-Citied them. In any regular window, they can spunk 100 mil on Lukaku, 70 mil on Kai Havertz, 50 mil on Timo Werner, 50 mil Ziyech, 50 mil Chilwell, 30 mil Mendy after dumping 70 mil Kepa.

Meanwhile, Liverpool is struggling to close Salah’s deal. The best we have done was swindled Barca out of 140 mil (not paid in full, btw) and spent it on van Dijk and Alisson. We live with our decisions, every signing matters, while Chelsea spend like drunken sailors and face no consequences. Remember when every journalist and writer had them winning or runners-up to the Premier League after Lukaku was signed? Every single one!

Money wins titles, occasionally, the planets align and a team like Liverpool comes along to disrupt the trophligarchy.

The body of work this Liverpool team is the map for future football text-books.
Vinnie ‘Vinning’ Pee

Adam, LFC etc…
Adam, LFC is like nearly all the American Liverpool supporters I know: mad for his team and has been for yonks, yet entirely reasonable, fairly unentitled, appreciative of his club’s success, but able to celebrate the success of other clubs. It’s the reason I can’t hate Liverpool quite like some of the other clubs that have hurt my beloved Magpies in years past*. Dammit.

From a USian perspective, I was pleased with Christian Pulisic’s performance, but surely no more disappointed that he didn’t take a chance than he or Tuchel are. He ran his skinny butt off, created acres of space, and made some fantastic passes.
Chris C, Toon Army DC (*Also maybe because Trent Alexander-Arnold’s soulful eyes have lately given me a bit of a man-crush.)

Liverpool remembered?
This is such a strange debate to me.

Will Liverpool be remembered for this period because they only won one title?

All titles get remembered. All teams who win them do. By that rationale (of city fans) if city win a champions League nobody will remember it because it’s only one. Absolute nonsense.

Now will everyone remember it the same way? Probably not. I’m sure blackburn and Leicester remember their titles as significant achievements over teams far bigger and more powerful than they, while everyone else remembers them as fluke seasons. But everyone…EVERYONE still remembers them. This talking point is just a stupid jab to try and discredit an achievement. The fact Liverpool took one title off city is an achievement because of city’s terminator like dominance of domestic football. Nobody else has done that, just Liverpool and we had to have an almost perfect season to do it.

Saying Liverpool’s title won’t be remembered is essentially saying none of city’s will be remembered because there was no competition. Which is a discredit to the hard work of both teams.

We shouldn’t be trying to take titles away from these two teams. We should be saluting them for providing us with several years of genuinely thrilling attacking football after the defence focused years that came before pep and klopp. They changed this league for the better, and personally I don’t wanna take that away from them.
Lee