It's Chelsea v Liverpool and it's the first proper big game of the season. 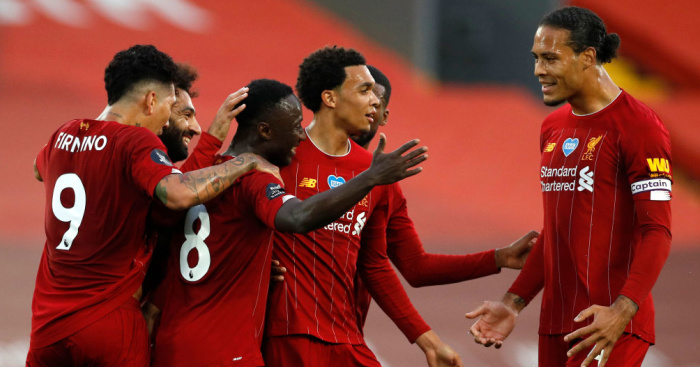 1) Will Havertz and Werner make this an end-to-end game?
Liverpool’s high defensive line was constantly tested by Leeds United in their opening game last weekend, in which Marcelo Bielsa instructed four or five players to make runs on the shoulder of the last defender. It was the main reason the game became so stretched: Liverpool were made to frantically backpedal, and yet were handed the opportunity to counter-attack straight back because those Leeds runners had emptied central midfield.

Sunday’s game could follow a very similar pattern; a repeat of the 5-3 in July certainly isn’t out of the question. Frank Lampard will have been encouraged by the way Virgil van Dijk and Joe Gomez were unsettled by the number of bodies Leeds committed forward, and will no doubt believe his new-look front line can similarly catch the champions by surprise.

Against Brighton, Kai Havertz and Timo Werner consistently made very intelligent runs in behind the Brighton defence and the Chelsea midfield played long balls forward to get them through on goal. With these two moving into the gaps left open on the flanks by Trent Alexander-Arnold and Andrew Robertson, Chelsea won’t be able to resist turning this into an open end-to-end game.

2) Can Keita be the key man against Chelsea’s porous midfield?
Chelsea’s issues coping with the defensive transition continue. Lampard still lets his players attack without any structural discipline, meaning they are not prepared to press the ball – or compress space between the lines – when one of their attacks breaks down. Instead, with so many players roaming about in search of space, there is often a huge gap in central midfield for opponents to counter-attack through.

This inevitably happened in the 3-1 victory over Brighton in a game the hosts could easily have won (Graham Potter’s side won the xG battle – the real quiz – 1.44-1.27). Steven Alzate and Kyle Lamptey in particular found it too easy to break the lines and progress the ball, and if Brighton can take advantage of Chelsea’s porousness then Liverpool should run riot.

Naby Keita scored a brilliant opener in the 5-3 last season and was superb for the first 30 minutes, slaloming through central midfield like the Keita we saw at RB Leipzig. He could be the tempo-setter on Sunday, particularly following another assured performance in Liverpool’s season opener against Leeds. Keita’s verticality in possession is exactly what’s needed against this Chelsea team.

Just thought about Naby Keïta’s thunderous strike against Chelsea. He seems so good at regaining possession and instantaneously transitioning into attack mode.

3) Or can Lampard show caution and shut Liverpool down?
But we cannot guarantee this will be another open game. Prior to the 5-3 at Anfield, Chelsea had generally played well against Klopp’s Liverpool, holding a deeper defensive line and instructing his players to hold off on the press. In fact, those defensive transition issues were starker against non-Big Six clubs last season, with Lampard tactically withdrawing for the bigger games.

In their last league meeting at Stamford Bridge, a 2-1 Liverpool win in September, Chelsea recorded 13 shots to Liverpool’s six as Willian and N’Golo Kante played key roles in targeted counter-attacks.

The Brazilian winger found success in long diagonal switches that took advantage of Liverpool’s general narrowness – the front three offer little support to the full-backs – and although he is no longer at the club, Havertz, Mason Mount and Christian Pulisic could be instructed to do something similar.

The opening 10 minutes on Sunday afternoon will define the tactical pattern of the game. If Lampard successfully gets across a message of defensive caution with a deeper back line, Chelsea have a fighting chance.

4) Will back threes be a surprise feature of the game?
Chelsea may move to a 3-4-2-1 formation for this game, despite the fact this was the formation used pretty disastrously in the eight-goal thriller at Anfield. Their personnel has changed significantly since then, and against Brighton, Mount and Havertz operated more like inside forwards in the Conte mould, suggesting Lampard would be open to using them behind Werner in a 3-4-2-1.

The obvious advantage of this formation is that it would allow Chelsea’s centre-backs to go three-on-three with Sadio Mane, Roberto Firmino and Mohamed Salah, while leaving the wing-backs free to push up and close down Alexander-Arnold and Robertson. Attempting to cover the narrow forwards and wide full-backs is a Catch-22 when playing with a four-man defence but, in theory at least, things improve with a five.

It would also potentially create space for Chelsea to split passes through the Liverpool midfield; Mount and Havertz can drop in between the lines to create a square shape in the middle with Jorginho and N’Golo Kante, out-numbering Liverpool’s three.

Klopp could also use a back three at some point in the game, as he did in the 2-1 win in September. He switched to a 5-4-1 for the final ten minute as the Chelsea pressure built, successfully shutting the hosts down.

5) Will Salah’s head-to-head with Alonso prove decisive?
As a confidence player, Mo Salah’s hat-trick against Leeds puts him in a very strong position ahead of facing one of the weakest left-backs in the division, Marcos Alonso, on Sunday. It is without question the biggest mismatch of the individual battles, and should be a prominent feature no matter the formation choice or the wider pattern of the contest.

If the game is end-to-end, Alonso won’t be able to cope and will surely get caught out of position, whereas if Chelsea successfully make it a claustrophobic affair Salah will still have the upper hand whenever he squares Alonso up on the right flank. In this scenario, Liverpool will no doubt repeatedly target Lampard’s left-back.

Should Chelsea go for the 3-4-2-1 then Alonso will theoretically be tasked with tracking Alexander-Arnold, but the England right-back is more likely to dip infield and play in the right half-space as he seeks to get away from the wing-back. That, in turn, will see Salah passed back to Alonso as the Egyptian takes up the wider position vacated by Alexander-Arnold. Unfortunately for Chelsea fans, there is no escaping the Alonso v Salah battle.