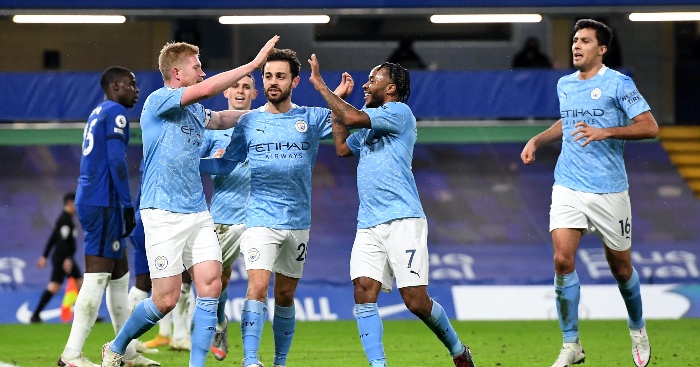 Ilkay Gundogan, Phil Foden and Kevin De Bruyne all struck in the first half as Man City thumped Chelsea 3-1 at Stamford Bridge to heap pressure on Frank Lampard.

Man City shook off a clutch of positive coronavirus cases and Benjamin Mendy’s breach of social-distancing protocols to stun the Blues with three first-half goals inside the first 35 minutes in west London.

Callum Hudson-Odoi neatly netted a late consolation for the hosts, but Lampard’s men were second best in all departments.

Pep Guardiola’s side stretched their unbeaten run to 11 matches in all competitions, moving up to fifth in the Premier League.

Chelsea by contrast have now managed just one win in six, slipping to eighth place.

The Blues have now lost five of 17 league games, with the current stumbling form no doubt of growing concern.

Chelsea brought Lampard back to Stamford Bridge as head coach in summer 2019 and installed Petr Cech as a technical advisor with a view to a long-term overhaul.

And the Blues will also remain calm on the summer’s £220million spending spree, given the club’s prior transfer ban.

But even in that context Lampard knows full well that the minimum standards are Champions League qualification and strong cup performances.

Lampard must now pick up a frustrated squad to generate new confidence, momentum and results, to reverse the current plight.

The visitors were without Ederson, Ferran Torres, Nathan Ake, Gabriel Jesus, Eric Garcia and Kyle Walker – and still won at a canter.

Foden received a vigorous embrace from Guardiola on his second-half withdrawal, to toast a virtuoso performance and one that left Chelsea chasing first-half shadows.

The hosts actually started the brighter and should arguably have had a penalty, when Rodri brought down Timo Werner in the box only for all the officials to overlook the incident entirely.

Rodri had already been censured in bizarre fashion for what was highly questionably deemed a back-pass to league debutant goalkeeper Zack Steffen. The indirect free-kick was awarded outside the area, in another mistake by referee Anthony Taylor and his team of officials.

City’s dominance was not long in materialising, though, with De Bruyne sounding the first warning by firing wide when he should have scored.

Gundogan quickly handed Man City the lead, firing in on the turn after a neat ball into his feet from Foden.

Chelsea’s heads clearly dropped after that second goal, and a wretched half worsened still further when De Bruyne drilled in too.

One pass over the top left N’Golo Kante exposed and run ragged by Raheem Sterling, who had the calmness to cut back and whip goalwards having already raced half the field.

Sterling’s fine effort rebounded off the post, and De Bruyne was first to the loose ball, controlling and slotting home.

Gundogan still found the time to flick wide as City tore Chelsea open yet again, before the half-time whistle handed the humbled hosts a modicum of respite.

The second-half came and went with precious little incident, save the unmarked Rodri failing to bury a header and Hudson-Odoi finishing smartly at the death.