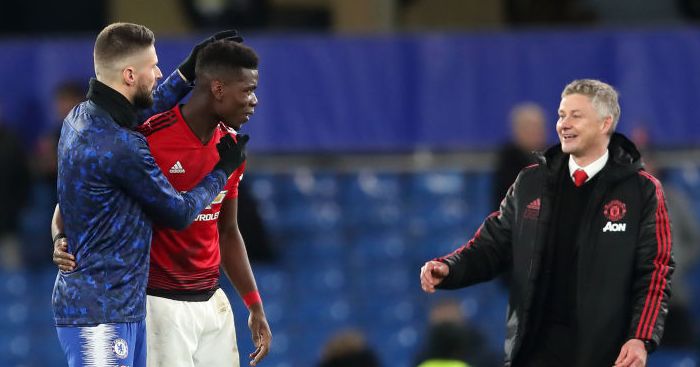 It says a lot about the low quality of the 2019/20 Premier League season that Chelsea and Manchester United are both firmly in the race for a top-four finish. They have won just two games between them across the last five rounds, a slump that ought to end hopes of a successful campaign, yet Chelsea remain in fourth and United just six points behind.

Opening up a nine-point gap with 12 matches remaining, ordinarily we would say a Chelsea win on Monday night would take United out of the race. But frankly, who knows this year? Nevertheless it’s a huge game, not least because Chelsea are desperate to exorcise the 4-0 defeat in August.

1) Will Chelsea’s openness see repeat of opening day 4-0?
Although at the time Man Utd’s 4-0 win felt like a bizarre result in an even contest, the way both clubs’ seasons have panned out makes it seem pretty normal in retrospect. From Chelsea’s chaotic defensive performance to United’s sudden bursts of speed to the sense of clumsy improvisation in both camps, nothing much has changed since August.

Chelsea continue to struggle in transition from defence to attack, fanning hopelessly wide when in possession because Frank Lampard doesn’t give detailed positional instructions to ensure the team shape screens against a counter-attack. Apologies if you’re getting bored of hearing the same analysis week after week, but the fact we have to keep highlighting it shows just how little tactical coaching is taking place at Cobham.

Gabriel Martinelli’s breakaway goal a few weeks ago was the perfect example, but there have been numerous others since United pierced through the Chelsea midfield in August. N’Golo Kante is asked to get too far forward, leaving a flat-footed Jorginho all alone at the base, and on Monday that should allow Ole Gunnar Solskjaer to play his preferred system.

Chelsea and United have become more dogmatically entrenched in their methods since the reverse fixture; this game will see Chelsea hog possession as the visitors sit back, waiting for a chance to pounce on the counter.

2) Will Lampard’s creativity issues hand Man Utd a clean sheet?
If that wasn’t enough to assume Man Utd have the upper hand then consider that Chelsea have only scored one goal from open play in their last three league games. The chance creation has dramatically dried up since the first half of the campaign, when Mason Mount and Tammy Abraham were scurrying around at full pelt. Both players now look jaded and Chelsea’s attacking lines subsequently disorganised.

That’s chiefly because Lampard doesn’t appear to coach specific patterns in the final third, instead going for the improvisational approach that he will have learnt from the likes of Jose Mourinho and Carlo Ancelotti in his playing days. In the modern game a lack of automations – the muscle memory passes planned several moves ahead, as at Man City or Liverpool – make it very hard to break down a deep-lying defensive wall like the one United will erect at Stamford Bridge.

The problem is worsened by the youth of the Chelsea front line. Without the experience to come through a rough patch of form, their low confidence has led to a poverty of imagination in the final third. United have conceded just four goals in their last nine games in all competitions; theirs is a solid back four with the strength, in Harry Maguire, to nullify Mount and Abraham.

3) Or can Hudson-Odoi and James get the better of Shaw?
It is perhaps a consequence of Chelsea’s low morale and fading synchronicity in the final third that a more simplistic and traditional attacking pattern has emerged recently; without runners buzzing about into triangles centrally, Callum Hudson-Odoi and Reece James are flitting down the wings, hesitantly running at defenders and looking for overlaps.

They’re both very talented attackers, so it’s actually working surprisingly well. Hudson-Odoi already has a reputation that forces left-backs to back off and follow him as he cuts inside, which is opening up space for James to whip crosses into the box. And he does that incredibly well.

Luke Shaw’s performances have dramatically improved this season and Daniel James works hard tracking back, but the United left-back remains prone to ball-watching or lapses of concentration while Daniel is unlikely to consistently get tight to Reece. The right-back will create chances. Whether Abraham can put them away is another thing altogether.

4) Can Fernandes help James & Greenwood open Chelsea up?
This could be the perfect game for Bruno Fernandes to announce his arrival as a Manchester United player. The former Sporting number ten loves to ghost between the defensive and midfield lines, shooting from long range or driving at the back four. He is also adept at spraying the ball out wide, either from within the number ten zone or dropping into his own half and playing a long diagonal pass.

Chelsea’s aforementioned lack of control in midfield means Fernandes should find pockets of space around Jorginho, making him a crucial component of the United counter-attack. But perhaps more important will be those distributions out wide, spreading or switching the play to expose the lack of cover Chelsea’s wingers give the full-backs.

In United’s most recent game, a 0-0 draw with Wolves, both James and Juan Mata played strangely narrowly, cutting inside to ensure United were suffocated by the Wolves midfield. Solskjaer should focus more on width on Monday given United will be set up to play on the break, meaning Mason Greenwood and James moving wide to receive passes from Fernandes.

5) Will Lampard finally give Giroud a chance?
Olivier Giroud has been frozen out of the Chelsea side for some time, but now the transfer window is shut and he remains at the club surely it is time Lampard gives his World Cup-winning, experienced and highly talented striker a chance to replace Abraham in the team. Giroud might not be a prolific goalscorer, but it is telling that his team-mates – notably Eden Hazard and Kylian Mbappe – love playing with him.

How Chelsea could do with a selfless forward able to play little give-and-gos around the edge of the D; it is precisely the kind of movement that could revitalise Mount and restore the football of the first half of the campaign, when Chelsea made central attacking midfield a fertile space.

What’s more, Abraham’s poor form (two goals in nine games) suggests he could do with a break, plus James’s crossing would become a considerably more potent weapon with Giroud’s head on the end of them. Abraham’s limp miss against Leicester, following a brilliant James delivery, would have been buried by the Frenchman.

If that wasn’t reason enough, then Maguire’s presence at the heart of one of the country’s meanest defences should sway Lampard to give Giroud the nod.