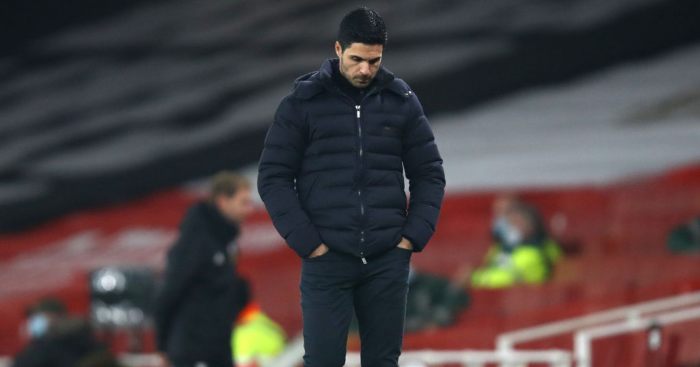 Former Chelsea boss Maurizio Sarri has emerged as top target for Arsenal if they decide to sack Mikel Arteta this season, according to reports.

Arteta has had a mixed start to life as Arsenal manager, since taking over from Unai Emery last December.

The Spaniard led his side to victory in last season’s FA Cup, but many Arsenal fans are still unconvinced after last season’s exploits left them finishing outside the Premier League top six for the first time since 1995.

The start to the new campaign has been slow, too. The Gunners sit 14th in the table having won just one of their last six games in the Premier League.

In those six matches, Arsenal have only managed to score two goals with one of those coming from the penalty spot in the 1-0 victory over Manchester United.

There have been a few calls on social media for Arteta to be replaced but there has also been a lot of support for the 38-year-old from pundits and former players.

However, StadioSport in Italy (via Sport Witness) claims that Arteta is ‘getting closer to being sacked’ with Sarri the ‘first name on the list’ to replace the Arsenal boss.

Sarri arrived at Stamford Bridge in July 2018 as a replacement for fellow Italian Antonio Conte after spending three years at Napoli.

Despite some negative reaction from sections of the Chelsea fan base not convinced by his style of play, Sarri guided Chelsea to the Carabao Cup final, where they were beaten on penalties by Manchester City, and then finished third in the Premier League.

The Italian ended the campaign on a high, with victory over Arsenal in the Europa League final in Baku.

Leeds aren’t scoring as freely, but don’t be fooled: they will seriously test whether Frank Lampard really has sorted out Chelsea’s defence. Read the full tactical preview of Chelsea v Leeds here.