Chelsea have had a 'nightmare' despite signing all those players... 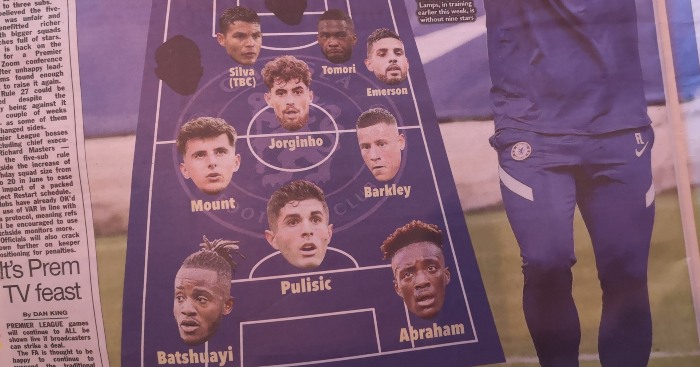 Chelsea have had a ‘nightmare’ despite signing all those players. And Messi to Manchester United? Don’t give it oxygen…

Crisis talks
‘ENGLAND have been plunged further into crisis after FIVE of Gareth Southgate’s squad tested positive for Covid-19,’ screams the back page of The Sun.

Odd that the original ‘crisis’ appeared on the front page on Tuesday when no England player had actually tested positive but – crucially – Raheem Sterling had been to a party in Jamaica with some other black men.

Blue nightmare
The theme continues in The Sun, with West Ham fan Andy Dillon let loose on the news that eight Chelsea players are in quarantine. Apparently it has now been a ‘nightmare pre-season’ for Frank Lampard, despite his club signing all of the footballers.

‘Those meticulous preparations to lead his club back to the position of being genuine title contenders will now face an early challenge.

‘One far greater than defending champions Liverpool, ambitious Manchester City or any dogged opposition can mount on match day.’

Chelsea have just ended a Premier League season 33 points behind Liverpool. And you want us to believe that a group of players being a few days late for training is the biggest obstacle in the way of Chelsea winning the title?

But what a group of players; The Sun have even attempted to fill a whole team, claiming Chelsea ‘are close to having a full first XI out of action due to Covid-19’.

Indeed. Now whatever will they do without Michy Batshuayi and Emerson? In fact, a grand total of three of the starting XI from the FA Cup final could possibly miss the opening game.

At this rate they might have to play newly signed fringe players Timo Werner, Hakim Ziyech and Ben Chilwell.

Chaos theory
There is some over-egging of the crisis pudding going on here, with the Daily Mirror back page opting for ‘COVID CHAOS’, with John Cross writing that ‘PAUL POGBA has become the latest highest profile player to test positive for coronavirus as the new season could be left in chaos’.

Here’s a tip: Start thinking of it as an injury and then it becomes a tad ridiculous that you are claiming ‘chaos’ when a handful of players could miss the start of the season.

Arse
”Four Arsenal stars quarantined’ ahead of Community Shield clash with Liverpool’ is the big headline on the Mirror website; it was top of their MOST READ list on Friday morning.

And one of those ‘Arsenal stars’ is Gabriel Magalhaes. The eagle-eyed among you may have spotted that he is not actually – and we think this might be crucial – an Arsenal player.

Smelling a rat
Ian Ladyman does not know what to think in the Daily Mail. One minute he is claiming that ‘positive tests are now running through the Premier League at an alarming rate’ and the next – literally one paragraph later – he concedes that the ‘percentage of players testing positive remains small’.

Quote of this and all days
“Maguire claims that when the minibus stopped, he did not know that it was outside a police station. I would urge all people to have a look at Mykonos police station. It is clearly obvious what this place is either during the day or night.

“There are many police cars parked outside it at night, there is a sign stating that it is a police station and there are officers coming in and outside of the building. The only way you would not be able tell if it was not a police station is if you are very drunk.

“But clearly, he was not that drunk, because according to him he was able to fight off a group of men who he thought were kidnappers and try and escape. If he had the clarity of mind to do that then obviously, he would have also been able to see that the minibus had pulled up outside a police station” –  Greek prosecution lawyer (and future after-dinner speaker) Ioannis Paradissis.

And there we were…merrily presuming that Mikel Arteta had brought in summer signings to sit on the bench.

A fine Messi
Over at the Manchester Evening News, they definitely don’t want anyone to think that Lionel Messi might be joining Manchester United. Oh no.

Scroll down looking for Messi’s name and what you find is an entire article detailing ‘Why Manchester United won’t be trying to sign Lionel Messi from Barcelona’.

This is our favourite line:

‘But the reality is the name Manchester United sells papers and attracts interest, so there was never going to be a Messi-leaves-Barcelona saga without a move to Old Trafford being given credence and oxygen in some part of the world.’

Recommended reading of the day
Nick Varley on Marcelo Bielsa